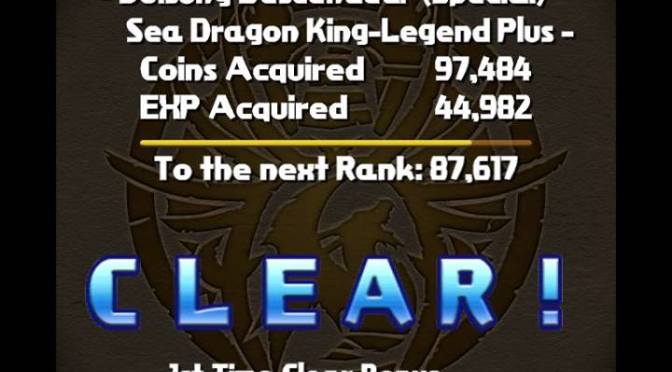 Volsung Descended went live this afternoon and I was eager to push my puzzling skills to their limit. The dungeon has a similar layout to Zaerog Infinity in that the first few floors are freebies that give you a chance to level up your monsters a bit. However, Volsung is significantly harder and I place it on par with Scarlet Descended as the final boss is much more difficult to deal with unless you bring a delay or poison as he lacks a status shield.

I decided to take my fully hypermaxed Awoken Sakuya

team over my Yomi Dragon

because the dungeon has your monsters starting at level 1 and their team cost affects their ending level. As such,

with his 99 cost would end up horribly underleveled and the amount of plus eggs would not be able to compensate either. Plus eggs play a critical role in these rogue dungeons because they provide their full value regardless of your monster’s level. This makes the beginning floors easier to manage as your health and recovery can be used to help stall through bad boards.

Floor 5 is the first speed bump I encountered as the pre-emptive 99% health cut needs to be quickly healed up because  the following floor has a 10,230 pre-emptive. You also must kill floor 5 in 2 turns or push under 50% to trigger the 1 turn bind. This is where careful orb management comes into play and you must find a way to heal and deal damage at the same time.

Floor 6 is quite nasty as this wet cat has 3.8 million health and your monsters are have still not leveled up very much. My strategy was to kill him in 2 turns with the first pushing him past 80% health to trigger the status void shield. In an emergency, if I was both my

actives were down, I would use 1

Floor 7 is simply a matter of killing before either can hit you, just make sure you overcome the 180k defence.

does not go easy on you. Even if all your monsters were max level, she is still dangerous to play around with as she hits every turn for 19,969 along with changing 1 random orb into blue. I would use 1

gravity to guarantee I pushed her into her 75% thresh hold so she would bind my monsters and leave my board unchanged. In case of repeated flubbed combos, I reserved my second

to clear binds should they occur again. It proved to be better to use my gravities on

as I did not want to risk pushing the boss

too hard and triggering his 1% health execution ability (which I did die from before). I also chose to use Elia

Floor 9 is the first form of Volsung

who has a “mere” 4.5 million health. I tried not to play much with him at this point because I wanted to conserve as many actives as possible for his final form. My team is capable of surviving any hit on this stage, but I was able to 1-shot him on my various attempts.

Floor 10 is the most exciting and nerve racking part of the dungeon as he causes 20% more water and fire skyfalls along with locking them in place. This added skyfall mechanic actually got me killed in a previous run due dealing too much damage and triggering his 1% execution ability. On my successful kill, I activated

gravity). Due note that if you push him below 50% on your first turn, he will do his 99% health cut and attempt to bind your skills for 10 turns. As such you gain an extra turn. Main reason I used

right away was in case Volsung

After removing his resolve buff, It was simply a matter of matching my board to finish

Hopefully this proved helpful and saves you some stamina as you know what to look out for and where to conserve actives. I thoroughly enjoyed playing this dungeon as it offered lots of puzzling situations and challenging mechanics to overcome.

Looking back, I could have used a delay, but I did not want to sacrifice any sub to do so as my

has no pluses and she would essentially be dead weight until the final boss. Fantastic has more options for delays and plan to use them when I give it a try there.