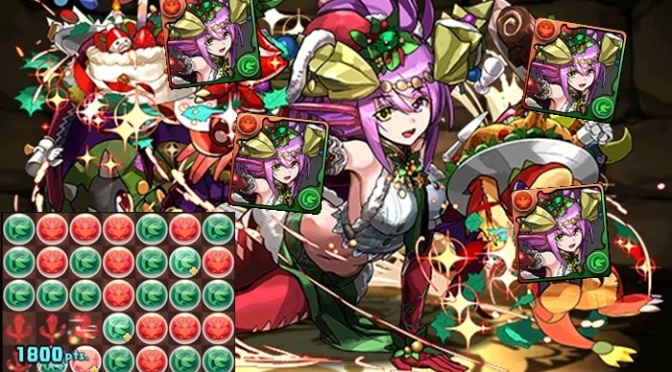 The Christmas REM is in full swing and alongside the disappointing REM, Christmas Sonia

makes her triumphant return to the MP store for 300,000 MP and may be many players first chance at acquiring a bicolour board changer with 2 turns of Haste.

At one point in time, she was the premier Ranking Dungeon solution for Tournaments that enabled 7×6 leaders along with greatly boosted Style Points. This led to players creating a bicolour System with 5 Christmas Sonias (or equivalents) which enabled them to always solve a bicolour board while tapping into the highest level of Style Points via Rows or L’s.

As a result, these Ranking Dungeons were heavily skewed towards players who had these teams as they could score infinitely higher compared to everyone else. This occurred for at least 2 Ranking Tournaments and many players are wondering whether or not it is worthwhile to invest in these teams.

This article will explore the power of Christmas Sonia along with the current MP store situation.

The goal of Ranking Tournaments is to score as high as possible under various conditions where certain aspects are more heavily favoured. For the most part, it is easier to solve bicolour boards as they are only 2 elements along with being able to rearrange them into specific patterns for Style Points. Furthermore, the 2 turns of Haste when used across 5 Christmas Sonias (or other bicolour 2 Haste card) enables you to always solve a 2 elemental board. Full list of other options can be found HERE.

What this looks like can be seen in the two following videos:

I had a significantly easier time securing a Crown from both of these Tournaments simply because I had the correct team to abuse the Style Points offered and just completing the dungeon would yield a much higher score.

Between these two, events, the most recent one occurred in March 2019 and since then, GungHo has stopped releasing Tournaments that can be abused in this way. As such, my Christmas Sonias have mostly sat in my Monster Box waiting for another time to be used again.

Ranking Dungeons are continuously changing for non-Fixed Teams and I feel GungHo will not be pushing Tournaments that can be abused in this manner. Furthermore, we seem to be in an era of bonus points to Time Remaining which heavily pushes minimal combos with fast solves, even on shorter dungeons where combos count for more points.

As such, what I feel becoming more important moving forward will be instantaneous board changers that create a perfect 15-15 board with Magic Lin

leading the charge. Magic Lin’s board changer will produce a perfect 10 combo board with no additional animation which is ideal for Ranking Tournaments.

With that being said, it is impossible to know what will happen in the future as GungHo can always change things without warning. On the bright side, there is one recent Ranking in JP that did feature this System abuse so there is a strong likelihood we will get it as well.

At this point in time, many players have excessive amounts of Monster Points and no viable place to spend them. Furthermore, there are only a handful of truly viable cards one can purchase which has also led to this build up.

will be the next most valuable cards to own with each one having varying value depending on your individual Monster Box.

With this in mind, you need to determine if owning any of these cards is more important compared to the possibility of owning a Christmas Soina System who may or may not actually pay off.

Christmas Sonia has the potential to form an abusive bicolour Haste System that has enabled two easier Crowns from previous Ranking Tournaments. In that same breath, GungHo has stopped releasing Ranking Tournaments that could allow this form of abuse from occurring which appears to be the trend moving forward.

As such, it makes it much harder to say with absolute authority players should build a bicolour Haste System through Christmas Sonia due to the fact that it may never be utilized. While the Monster Point shop has not included anything new and viable for a while, that could easily change tomorrow.

If you are someone who has never owned a Christmas Sonia System, what do you think about purchasing her at this point in time and whether or not you think we can ever abuse the System in a Ranking Dungeon again.

37 thoughts on “To Buy or Not to Buy: Christmas Sonia”