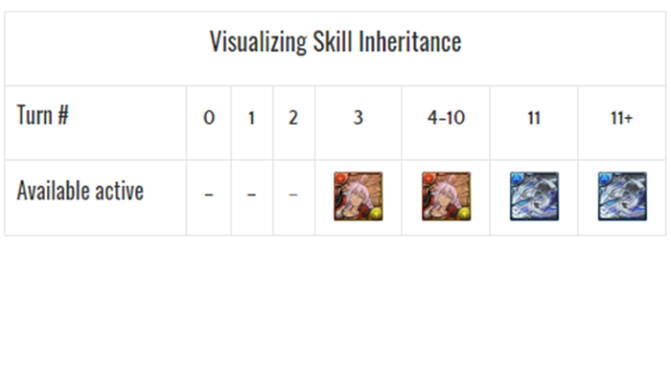 PAD is a wildly complex game that can incredibly overwhelming to newer players as the entire concept of an early game experience has largely been removed due to Powercreep along with Normal and Technical Dungeons being incredibly old and out of date.

This can give new players a false sense of security when they are using 2021 teams to clear 2014 content as they will be wildly unprepared when faced with modestly challenging content.

As such, I would like to take the time to discuss a key mechanic of PAD: Weapon Assists

/ Skill Inheritance. This mechanic is vital to your success when playing through challenging content and adds another layer when it comes to team building. In fact, Weapon Assists tend to be solid cards to invest in as they tend to be Powercrept at a slower rate compared to Leaders or subs.

This article will provide a brief history of Weapon Assists, how they function, and how to optimize their usage.

actually came out after the ability to Inherit/Assist cards and we referred to them as Skill Inheritance at the time. Eventually GungHo released Weapon Assists and changed the terminology which is why the term inherits/assists are often used interchangeably.

For reference, here is an ancient screenshot from 2016: 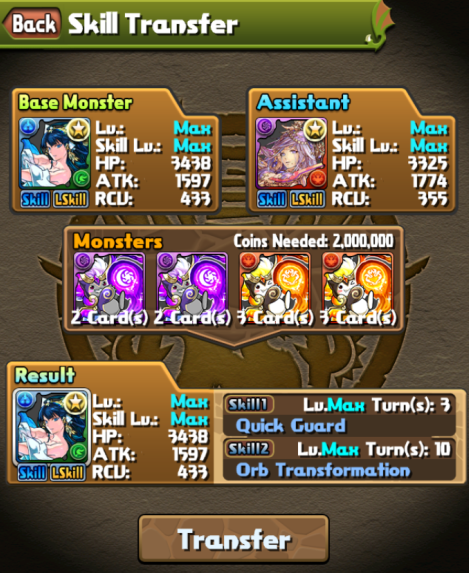 At this point in time, it is rare to actually inherit something that does not have a Weapon Assist due to the opportunity cost of missing out on awakenings.

Weapon Assists are cards that feature the Awoken Assist

awakening which means that when they are inherited/assisted, they will confer their respective awakenings to the Base card (the Base card is the monster who is being used on your given team).

From this above image, the inherited Nelle’s Weapon

awakenings which will greatly bolster the Passive Damage of a given team. In essence, you can selectively choose which awakenings are present on a given team as you can bolster your damage, provide Resists (

In addition to providing awakenings, Weapon Assists also provide a second active skill that can be used if successfully charged up or as a buffer to protect yourself from Skill Delays.

In the following example, I will be using Gileon in his Base form

(27 turn cooldown) who has inherited the Blue Samurai 3 Weapon

(8 turn cooldown). Turn 0 occurs after any active skill is used and the Turn # row should be viewed as a sliding scale with Hastes and matching orbs increasing the number and Skill Delays decreasing the number.

Entering a dungeon with X number of Skill Boosts

Using either active skill will reset the Turn # to 0

As such, if you entered a dungeon with 26 Skill Boosts, you would have to wait for 1 turn in order to Transform Gileon

When the second active becomes available, it is often referred to as Overcharging and can be devastating if you become locked out of your Base active skill, especially if that skill was Transforming.

On the other hand, there will often be times when you want to have access to the inherited active as it may be a key solution to countering various mechanics such as the Samurai 3’s Weapon which can counter Damage Absorb.

Let’s use another example with Gileon and the Samurai 3 Weapon, but this time Gileon

has successfully Transformed which has changed his active to a 3 turn cooldown:

In the above example, players will have the opportunity to use the Samurai 3’s Weapon on an 11 turn cooldown assuming Gileon is not used during turns 3-10. This additional layer of using Weapons to your advantage is key to overcoming challenging dungeons as it effectively grants 12 different actives (not counting Transforming ones).

How to optimize their usage

I am a strong believer that Team Building revolves around countering the dungeon’s mechanics by prioritizing unavoidable abilities first. The logic is that if you are able to avoid/negate incoming mechanics, the dungeon will be easier to clear. As such, using Weapon Assists are key to success as they grant additional active skill coverage and/or Resists (

With this in mind, I want to highlight several ways to leverage the most value from your Assists.

If you wish to see a detailed breakdown of the Arenas, Colosseums, and Shura Realms/World of Carnages, check out my other article HERE.

Reusing the Transformed Gileon chart, we can imagine the active skill turn timer as a sliding bar in that matching orbs/using Haste increases the number of turns whereas Skill Delays lowers it.

As such, if we were on turn 8, we can use Gileon’s base active but let’s say we get hit by a 5 turn Skill Delay, we are now pushed down to turn 3 which means Gileon’s active is still available, even if we did not have Skill Delay Resists (SDR

). Conversely, if Gileon had no inherit, his maximum number of turns would be 3 and the 5 turn Delay will reset us back to turn 0.

) which helps ensure it never Overcharges and thus preserving your base skill.

The number of Skill Boosts

on a team directly corresponds to the number of turns players no longer have to wait before using an active skill. Effective Skill Boosts are either Hastes (instantaneous active skill charging) or Delays (prevents enemies from attacking for X turns) which contribute to charging up your active skill as they allow you to do so in safety.

This has the most relevance for the current Transforming meta where the key to success is Transforming your key cards right away in order to take advantage of their new and updated kit. Thus, having sufficient Effective Skill Boosts will be vital to your success.

Building upon this, Hastes and Delays are more valuable compared to pure Skill Boosts if a card has a multi-step Transform such as Nautilus

. This is because once players reach 25 Skill Boosts, Nautilus can do his first Transform and then must wait 6 turns to Transform into his final form. These 6 turns are not aided by Skill Boosts but using Delays or Hastes will help close the gap for when you can Transform again.

There are countless different mechanics in PAD and being able to address/counter them will be vital to your success in clearing challenging content. While some mechanics can be countered by actives or matching orbs in specific patterns, Resists such as the 20% Jammer

Resist can be utilized to counter these mechanics without an active or matching orbs.

As such, Weapons such as the previously mentioned Blue Samurai 3 Weapon

are valuable as it will grant 80% Jammer Resist (

x4) along with a single Skill Boost

The more relevant Resists you can add onto a team, the easier time you will have clearing a dungeon.

Active skills have varying strengths and one way to improve your performance is to Upgrade an active skill for one of your cards.

This is often done for Clerics (cards who can clear Binds/Awoken Binds/Unmatchable) who cannot fully clear these mechanics by inheriting a card that provides a full Clear active.

over top. This new active skill provides a full clear of all Binds, Awoken Binds, and Unmatchable status on a 13 turn cooldown. Thus, waiting for 19 turns will grant Gremory and upgraded active skill while sill retaining the option of using her base active from turns 6-18.

If you your Weapon Assist is the same colour as the base card, it will provide a modest stat bonus to the Base card:

While this bonus is small, it does provide a modest benefit which should be taken advantage of if possible.

Weapon Assists/Skill Inheritance is a vital part of team building when tackling challenging content. By being able to provide relevant Resists, Awakenings, and/or key actives will greatly ease the difficulty when approaching playing through various dungeons.

The best way to leverage Weapon Assists is to cater your team to the specific dungeon at hand while prioritizing unavoidable mechanics first if possible. For myself, I constantly reference my Mechanic’s Checklist article when team building as it will influence which Weapons I bring.

With that being said, let me know how you make the most of your Weapon Assists in the comments below.