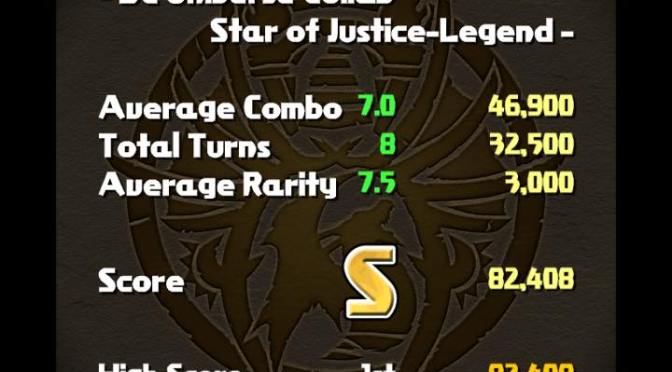 Hello! First and foremost, I want to stress that there are many ways of achieving an S rank but what I am going to explain today is just my own way of doing it with very a high success rate. This guide is going to focus on the easier to clear dungeons that have an S ranking system such as survey dungeons like Scarlet Snake Princess. With these dungeons, the damage requirement is quite low due to the first four floors being small trash and the bosses being only around 200k HP. Naturally, you should choose your strongest maxed out friend that has synergy with your team.

As my other posts have indicated, I rely on PuzzledragonX to do dungeon research and they include  the thresholds for an S rank. We are scored based on 3 categories for these dungeons:

In all my experience playing these dungeons, the most important factor in determining your score is your combos made and the rarity (average number of stars per monster) of your team. The total number of turns taken is generally irrelevant for the 150k+ score requirment dungeons as the other two criteria contribute so much more to your rank. Of course, if you combo amazingly high you can achieve an S rank regardless of team, but for the sake of this guide, let us assume 8.5+ combos is out of reach on an ordinary day.

I hope you are ‘sensing’ a pattern through these three pictures and their associated average rarity. If you lower the average rarity enough, you can produce an S rank almost regardless of combos made and total turns used. There are most certainly risks associated with bringing one-star subs; fragility and orb troll are your biggest downfalls. You can take some preemptive measures by bringing a team that colour counters the dungeon or by avoiding the higher skill cap leads as unconditional multipliers are easier to use when missing your normal subs/awakenings. In addition, you can bring a ‘tankier’ lead and a friend that have lower multipliers but increase your survivability. In these situations, the older tank style teams can be safer than the more modern high risk / high reward teams

Another way to help your S rank pursuits is to place your + eggs on a 1-star monster not only save gold when reaching higher number of pluses, but to add free stats without pushing the rarity higher. You are going to feed them away to a real monster at some point, so don’t lose sleep having a 297 Blue Goblin.

Now I know I may have a more dated sense of the game as I have been playing for so long, and I can glance over some of the lower level content that is coming out. With that being said, there are many low rarity subs who can provide an extra edge to your team. Most notable would be skill up materials for REM cards that have the same active skill, but with less rarity. Their stats may not be as ideal as “real” subs, but they can at least leveled up and still possess an active. With some at only 2 star rarity, this can be a way to add more power to your team without crushing your S rank dreams.

If those strategies and teams still feel too risky and your ability to combo is better than my own from 200+ ranks ago, I have a different approach you can try. This requires you to possess a mono colour lead, one useful sub, three one-star monsters, and ideally be TPA based. This strategy does increase your team cost if you decide to use a more powerful (aka rare) sub, but at the same time this offers a safer stat cushion as well as a 3rd useful active

This method has proven effective for me for the past several S-rankable dungeons and does not require insane combo skills (and thus stress). The main selling points are that you just need to focus on 1 colour and a TPA

match. This will essentially remove everything prior to the boss. Yes I am lucky to have leads with the luxurious time extend

awakenings as this also makes matching feel more “normal” as you would be missing most of your sub awakenings. I told my mom to do this as she neglected bothering to S rank (she always sits on 20+ tamadras somehow…) and she took my advice to add a fresh challenge into her 2 year PAD life, so based on my sample size of myself, my alt, and my mom, this strategy works!

If all of these methods sound daunting or unappealing, I do have one other “less thought” team composition remaining! This requires you to have a monster or friend with the normally worthless bonus time to move orbs leader skill and/or be purely combo based. Under normal circumstances, the silly time extend leader skill would be a lost cause, but if you want to forgo the team cost aspect and focus entirely on combos, this will also yield an S rank.

When using a Yomi

or something similar in nature, you can pretty much guarantee you will clear the maximum combos allowed on the board (worst case 7). I have yet to actually do this strategy inside a dungeon and simply went into Endless to test the viability — I could not make fewer than 7 combos and found myself sitting in my final corner waiting for the time to run out. For this strategy, pairing with a Kush

or any other strictly combo based lead will provide sufficient damage as the raw combo bonus of +25% per match will more than compensate for only a single leader skill. In terms of subs, you can honestly pick any of your choosing but give preference to fast orb changers, board refreshers, or enhanced skyfall actives (provided skilled up) to further increase combos made

Hopefully these ideas showcase several different ways to achieve an S rank other than brute force via combos and your main team. Also, keep in mind these dungeons will return so if you fail to S rank this time around, it will be back again and by then you will be more skilled and prepared! I was lucky to screenshot the DC collab the first time it came around. When it came around again, I played it extensively to skill up several cards and I can see a dramatic increase in performance on a personal level.