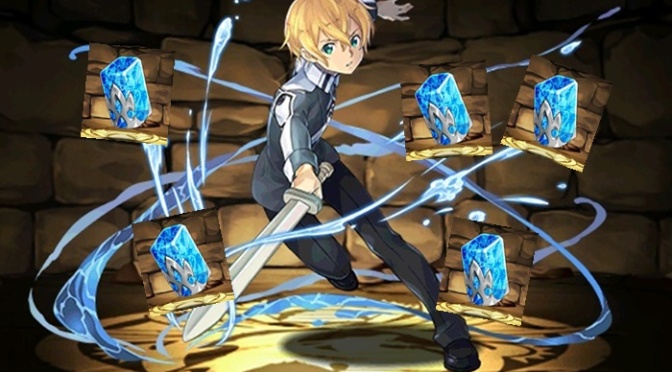 The Sword Art Online Collab is now in full swing and while Rare Egg Machine portion is lackluster, the Farmable Eugeo

is an incredibly valuable card and should be acquired by most players.

from a speed-farming perspective along with possessing an invaluable active skill.

Eugeo can be acquired through either 5 Rainbow Event Medals

or by heavily grinding the SAO event dungeon. Either way, one can find Eugeo in the Monster Exchange Event tab for the duration of the SAO event.

—video coming soon (when I get over this cold/sore throat)–

Eugeo at a glance

Eugeo is the real prize of the Sword Art Online event as he offers an accessible farming leader and double row generator. Each aspect has their own value under different situations.

Puzzle and Dragons has a large portion of the game dedicated to farming content as quickly and efficiently as possible. This is almost exclusively done in Coop for half stamina, pooled awakenings, and 10 actives across both teams. Furthermore, this can be further hastened by using No Skyfall leaders (less animation time) along with full mono-board changers.

In the case of Eugeo, he is able to act as both a No Skyfall leader along with being able to fully activate from a mono-Water board. This is further enhanced by his bind immunity and 2 Skill Boosts

to help other actives charge up in time. Expanding upon this is his amazing active skill. By being able to form 2 rows, players are able to potentially solve 2 floors by breaking up one of them on turn 1.

Despite the fact that Meridionalis

exists, Eugeo is accessible to all players and greatly lowers her value/niche.

In addition to being a wonderful farming leader, Eugeo can act as a stellar inherit for other farming teams for his double row formation. While the actual row itself is wasted on non-Water teams, it can be used after a mono-colour board changer and easily solved into a 7 Combo VDP

who must hit exactly 7 Combos for activation.

The following board showcases the VDP 7 Combo solve: 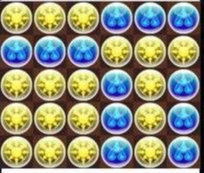 Depending on how long you have been playing, it is highly possible to have over 20 Rainbow Event Medals

(assuming none have been spent). This can be both good and bad as there is currently not too many worthy things to spend them on (even with the 2+ month heads up from the JP server.

Using Rainbow Event Medals can be good if you simply wish to save time as it can be quite a grind and if your stamina is needed else where or are lazy, it can greatly help in acquiring Eugeo. On the other hand, since all of the Teleport Crystals can be acquired by simply playing the dungeon over and over again, that is the more efficient thing to do.

Just remember that we have 14 days to farm and still have 10 days of January left for both the Anniversary and Monthly Quests. Furthermore, the SAO dungeon can be buttoned/swiped in Coop to save both time and Stamina.

Eugeo is an invaluable card to acquire but is only available for a limited time. Even if you may not foresee yourself using him right now, that could quickly change in the future when farming content becomes a higher priority. As such, it is better to spend the effort now to acquire an important card for the future.

Let me know what you think about Eugeo and whether or not you plan on acquiring him via Rainbow Event Medals or dungeon farming.