Puzzle and Dragons has dramatically shifted over the past few years to a coop-based game if one wants to be as efficient as possible. This has it’s pros and cons, but being forced to play in multiplayer is impractical for many players. As such, having a viable solo mode experience is always welcomed and Ganesha’s Treasure Trove is just what the doctor ordered.

Ganesha’s Treasure Trove is a 1 week event that can only be completed in solo mode and provides a viable medium for farming Skill Delay Resist Tamadras or Pys. As such, it is well worth your time/stamina to play this dungeon as much as possible during the week.

This article will summarize how the dungeon/Monster Exchange system works for Ganesha’s Treasure Trove along with a sample speed farming team.

Ganesha’s Treasure Trove drops special Medals at random and these can be traded in via the Monster Exchange System under the Event tab. 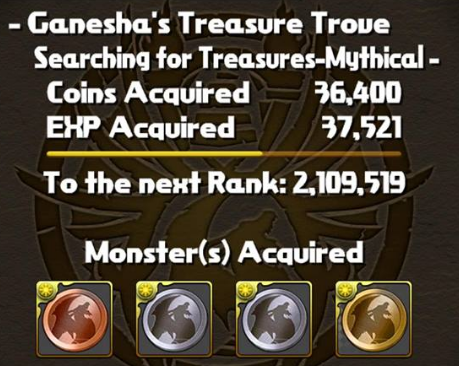 The above image shows 1 Bronze, 2 Silver, and 1 Gold Medal (left to right). 3 Bronze Medals can be exchanged for a Silver and 3 Silvers for a Gold:

Once Gold Medals have been acquired, they can be traded in for valuable items, but the Super Snow Globe is the most valuable.

The previous event allowed players to exchange for Super Snow Globes, but we will now only be able to do this once during the event. In addition, players will also have a one time trade available for a Diamond Dragon Fruit. 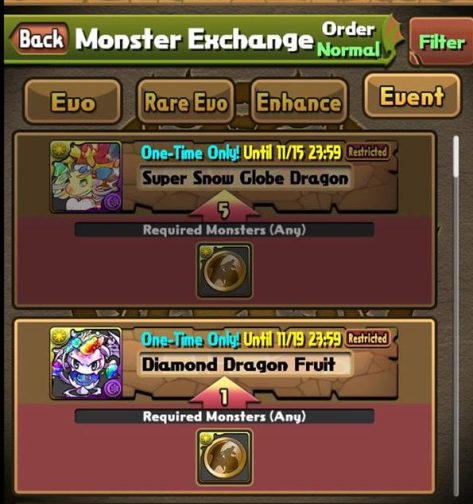 The Diamond Dragon Fruit probably has little merit for more veteran players but may be invaluable for newer accounts.

Event Medals do not stack

All of the Event Medals that drop from Ganesha’s Treasure Trove do not stack which means you may have some Box space issues. Thankfully, we are able to quickly exchange the Event Medals due to a Quality of Life improvement a few months ago. Just make sure to press the Exchange Again button.

You can use old Event Medals

If you forgot to exchange your previous Ganesha Treasure Trove Medals, you can use the old ones here. With that being said, try your best to exchange everything before this event ends as they will clog up your Monster Box.

Best thing to trade for

Due to the removal of the Super Snow Globe, Ganesha’s Treasure Trove is less amazing but is still worth farming. This is because it is the most efficient way to farm Skill Delay Resists (SDR) in solo mode along with SDR only being available during limited time events.

Drawing upon anecdotal evidence from many players and hundreds of runs, it can be conservatively estimated that each run drops a about 1 Gold Medal after trading. As such, let us assume it takes 3 runs to acquire 3 Gold Medals (90 stamina) which would make it more stamina efficient compared to solo Norse (or other featured) Rush for SDR.

While it is still more stamina efficient in coop, not everyone has the correct teams or a partner to play with. Furthermore, Ganesha’s Treasure Trove can be completed at any time, at your own pace which is appealing in its own right.

Any Py will cost you 4 Gold Event Medals which makes it more stamina costing compared to solo arenas if we assume a rate of 1 Gold Medal per run. Granted one can choose the particular colour, but SDR is probably the way to go overall as it is more rare by comparison.

Furthermore, being able to farm numerous SDR can give great trading power in the future if we were to suffer a SDR drought. As such, one might be able to demand a more lucrative trade than what would normally be done.

Should I be using Base Veroah?

is able to increase the drop rate chance within a dungeon. This has the most applications in Ganesha’s Treasure Trove as each floor is not guaranteed to drop something. As such, using Veroah can increase your stamina efficacy as you are more likely to have each floor drop an Event Medal.

Unfortunately, using Veroah is a slow strategy as she has no ATK multiplier and will dramatically slow down your clear times along with you being quite unlikely to swipe through the dungeon.

She is an option, but will be slower but may present a fun challenge if that is your jam.

Ganesha’s Treasure Trove is a relatively easy dungeon and has countless different farming compositions and is simply a matter of finding what works best for your Monster Box. For myself, I was able to utilize a Fire team that abused the God Killers on No.6:

Ganesha’s Treasure Trove is a wonderful event that gives solo mode players something viable to farm. While it is less stamina efficient compared to coop Norse Rush during SDR events, it is the most efficient solo avenue to acquire these special Tamadras. Furthermore, the dungeon is quite straight forward and can be completed by most players.

11 thoughts on “Ganesha’s Treasure Trove is Worth Farming”