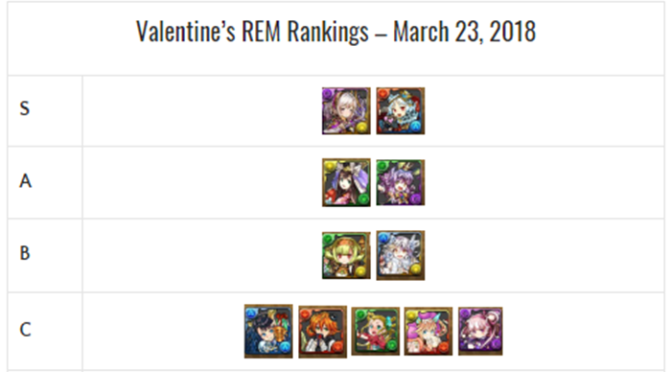 Love is Patient, Love is Kind, PAD Valentine’s REM occurs in March. While you may have spent all of your Magic Stones on Full Metal Alchemist, this seasonal REM is reasonable, but not as game changing overall.

For the most part, there is only one true chase card but the sprinkling of Gemstone Princesses does provide value at the lower rarities. This is important as these types of actives are the most reliable/universal way to provide damage enhancement for your teams. Furthermore, while the Chinese Celestials offered in this event are lackluster for end game players, they may be the easiest source of board changing for a newer player.

Finally, all of the cards featured in this REM are adorable and may help bring your Waifu to Laifu.

There are currently no updated pages for each of the cards on padx, but you can refer to their initial news post HERE. 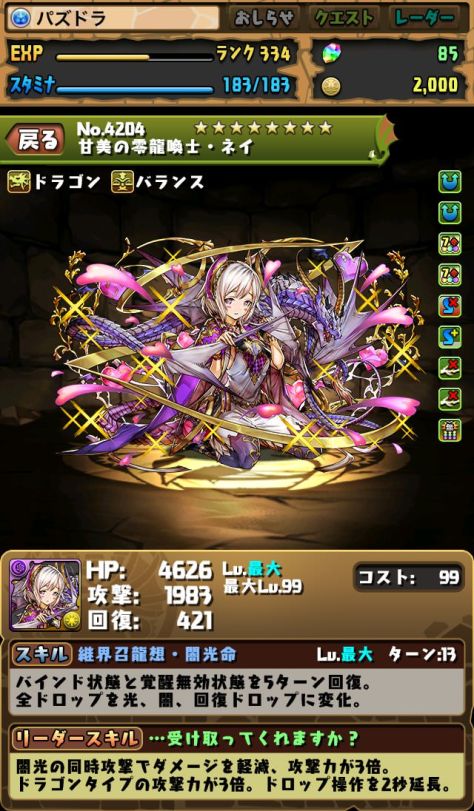 and other double 7 Combo

awakening cards. This is because Ney lacked any other form of valuable awakenings and became challenging to justify her usage.

However, Valentine’s Ney (VNey) offers a similar set of awakening as her GFE cousin, but comes with a stronger active and the Void Damage Penetration

Void Damage Penetration (aka Box awakening) grants the owning monster the ability to pierce through damage void shields and is a way to potentially sideskirt dangerous mechanics. However, Box awakening cards tend to not come with offensive awakenings which can sometimes make it challenging to deal sufficient damage. Thankfully, Valentine’s Ney comes with 4 additional offensive awakenings which enables her achieve spectacular levels of damage that is unrivaled by anything else that NA has to offer. With that being said, a possibly JP-exclusive Collab will have a stronger/more accessible offensive Box awakening card but we may or may not actually get that.

Overall, Valentine’s Ney is an amazing card to own but may not be as worth the chase compared to Edward

due to the fact that she is not a leader. 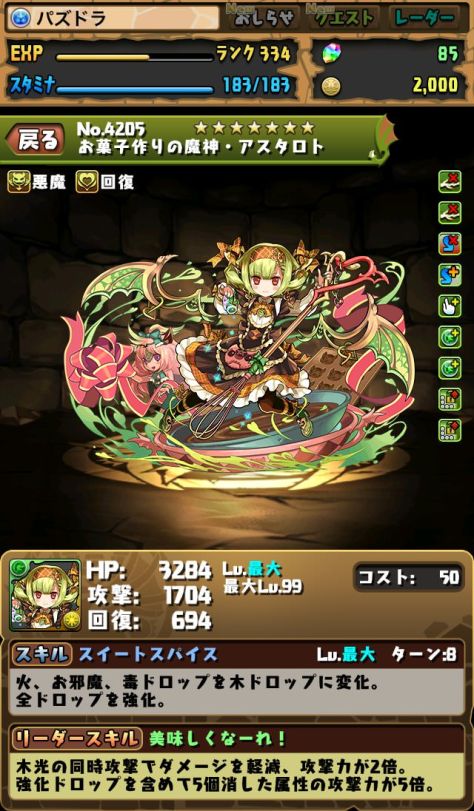 Valentine’s Astaroth is is a somewhat disappointing 7* Card as she is unable to fulfill any particular role well. This is because it is my belief that a card of this rarity should be able to do more as either a leader, sub, or inherit.

As a leader, Astaroth is able to lead a 100x ATK / 43.75% Damage Reduction team that has to match both Wood and Light along with a 5 orb 1 enhance (5o1e). Both components have modest orb hungry-ness, but when you are required to do both, it can lead to some inconsistencies when playing through challenging content. The damage reduction component (and some damage) is tied to matching both Wood and Light which is problematic as you may not have sufficient orbs after stalling to actually deal damage. This is problematic as you cannot rely on a passive damage reduction and may result in active skills being used at inopportune times.

Furthermore, 5o1e teams do have some difficulty as they are particularly vulnerable to Jammer/Poison attacks as those converted orbs lose their enhanced stats. Thankfully, Astaroth comes with both a Jammer/Poison conversion along with full board enhance. This is important as you are combining two important parts (kind of like how Akechi

100x ATK is nothing special in this day and age, but Astaroth has dual L-Attack

awakenings which propel her own damage output by a sizable amount while fulfilling her Leader Skill requirements. Unfortunately, your Subs may not have the same awakening which means their own output will be only 100x.

As a sub, it may be challenging to fully capitalize on Astaroth since her main source of damage comes from the L-Attack awakening along with a situational active skill.

Overall Astaroth is reasonable, but I was hoping for a bit more as a whole. 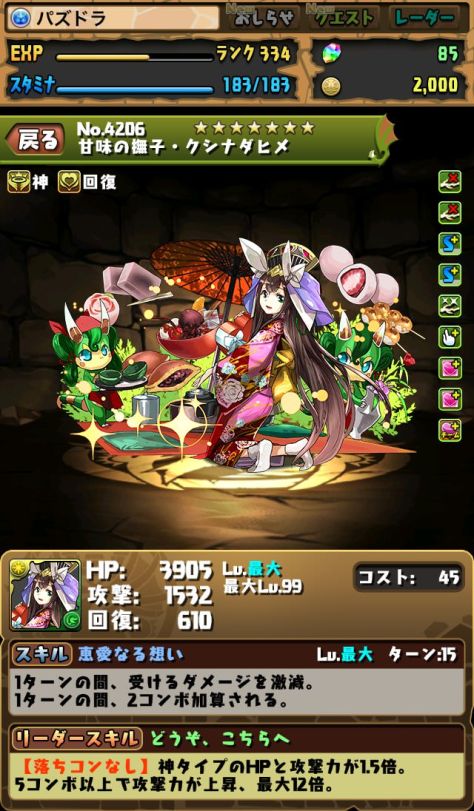 but works with Gods instead of Healers along with slightly modifying her active and awakenings. This is nice, but REM Kushinadahime has begun to fall out of favour due to No Skyfalls limiting your damage output.

A given board has 7-8 combos on average and with the No Skyfall clause, you are effectively capped at those respective multipliers. As such, you cannot get “lucky” and gain more combos along with not being able to deal higher amounts of damage without an active that adds combos. The initial main appeal of Kushinadahime was the ability to control damage which was a vital part for Arena 3 farming. However, the current end game focus has now shifted to encounters with outrageous amounts of health along with us having actives/awakenings that lower the need for damage control.

awakenings enable players to somewhat ignore those respective mechanics and diminishes the actual need for perfect damage control. These factors along with the need to pump out massive amounts of damage without actives is the main reason why Kushinadahime is on the decline, thus the Valentine’s Day form is already in jeopardy upon arrival.

This is not to say that she cannot clear end game content nor that she is a weak leader, it is just that she is not as ideal compared to before and is outclassed by other options.

However, Valentine’s Kushinadahime has some wonderful features going for her. Most notably is her higher health pool compared to her REM cousin, stronger active, and different sub pool. By using Gods over Healers, your overall health should be higher along with being able to take advantage of both leaders owning a Team HP

awakening. While having more health is wonderful, it does little good if you are unable to actually heal it back. Thus, one may think that using Gods may be problematic, but Valentine’s Kushinadahime is able to match a heart TPA and quickly heal up due to 2

enhanced Heal Orb awakenings. As such, she should have more HP than her REM counterpart along with similar/more healing potential when matching 4 heart orbs.

and not the Super Skill Boost awakening.

The Gemstone Princesses are the most desirable option for universal burst damage because they provide their additional multiplier for 2 turns along with functioning on all teams. The two turns is valuable for longer content or when you are required to burst down two consecutive floors.

Their formula for damage calculation is 1 + (0.3n) where n = the number of that specific awakening. Thus on a team with 8 Time Extends

The Valentine’s Day forms provide the same active skill as their REM counterparts but have a different primary colour which can potentially open up more doors for stats being transferred over when inherited. For the most part all the Gemstones are used as inherits so their actual stats/awakenings are less important overall. Granted these forms have stronger awakenings, it is most likely not enough justification to run them over a more ideal sub.

The inclusion of Gemstone Princesses in the Valentine’s Day REM provides wonderful collateral rolls for when you fail to roll Ney. In fact, this is by far the best time to pick up these invaluable burst inherit actives and may be justification to roll in this event.

and is the most universally flexible Gemstone to own as every team will have numerous Skill Boosts. This flexibility enables her to be used on a wide variety of teams and has even more applications in coop when one side is heavily stacking Skill Boosts (although only that player’s team’s awakenings are counted).

You can never own too many Carats as it will save you time and effort inheriting as well as helping you achieve 5-10 servings of fruits/vegetables per day.

which can be the most dominant awakening on certain teams, but is less universally powerful compared to Carat as most cards own multiple Skill Boosts.

. However, she may still provide enough burst damage to justify using but is more niche compared to Carat and Sheen.

The 5* base cards are all comprised of the Chinese Celestials in festive/cute outfits. Each one comes with their signature board changer (even Sakuya) along with enhancing their primary colour. While the exclusion of heart orbs hurts their overall value, they are going to be a blessing for newer players. This is because a newer account may be lacking enough depth in their Monster Box and being able to easily pick up a board changer is wonderful. In fact, if you are new and have no board changers what so ever, it is worth rolling for one and you may even get lucky rolling a Diamond egg.

Unfortunately, more veteran players will find little merit for these cards outside of cuteness. However, the inclusion of a single L-Shape Attack

may provide some value on future 5o1e teams but is still a far stretch.

On the bright side, all have Fantastic art and make wonderful Box Cheerleaders.

The Valentine’s Day REM is the best time to pick up a Gemstone at a reasonable rate. However, the only amazing/unique card is Valentine’s Ney while the Chinese Celestials are only valuable for new players who lack a board changer.

With that in mind, if you are lacking any Gemstone, it may be worth rolling as they do have respectable rates and will help round out your Monster Box. Unfortunately, purely chasing for Ney is less beneficial compared to chasing Edward as a stellar sub < amazing leader.

Let me know what you think about the Valentine’s Day event and how much you plan on rolling.