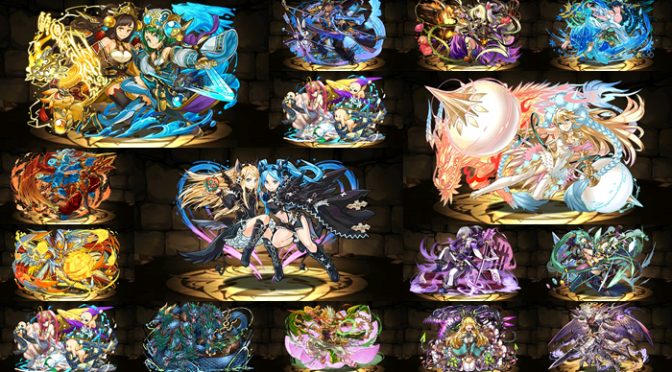 This has been one of my long term projects as my goal was to create a posting that can help all players find more information about their favourite monsters. This post will inevitably be pushed down over time; however, I have included it at the top of under the drop down tab of Monster Analysis: Master List so you refer back here any time you please.

This post will link you to all of my monster reviews and analysis as organised by pantheons.  These were my drafts, but from the various feedback I have received, I have made them public as people will always have questions about any monster they obtain from the REM. Do note that these analysis are a continuous work in progress and some cards may be missing or updated when they go live in a Godfest.

Please refer to my Popular Leaders and their Full Sub List post for inspiration on team building ideas. If contemplating on purchasing a MP Dragon, please check out my Monster Point Dragon Purchasing Check-list Guide.

The Indian 1 Pantheon is somewhat fragmented in that only 3 of the monsters have an Awoken Evolution. Furthermore, Shiva

only come into their full power with their awoken forms and will be quite weak beforehand. Indra

is powerful in the right situations, but has little benefit in the early game. Overall a strong pantheon for leaders and a single sub, but will take time to truly shine.

The Indian 2 Pantheon is quite lackluster due to non having Awoken Evolutions. Furthermore, several of them received a buff to their leader skill and no awakenings with their ultimate evolution. Overall, the Indian 2 series is in need of a buff to give them relevance as either subs or leaders.

received Awoken Evolutions. The other 3 received a Bankai evolution which does not alter their weak active skill. This makes them poor choices to run on their respective mono-colour teams as you will almost always have a better single orb changer option.

The Japanese 2 Pantheon was once heralded for their sheer power and dominance upon initial release. Their ultimate evolutions brought forth the next wave of powercreep, but have now fallen behind due to the advent of awoken evolutions and MP Dragons. However, they are still powerful in their own right and should be receiving their own set of awoken evolutions soon which will hopefully restore them to the top of the meta list.

The Greco-Roman 2 are renown for their double orb changer active that converts two different elements into their primary colour. This is fantastic for teams who wish to flood the board with their desired colour and generally is best on row based teams. With the introduction of their awoken evolutions, players now have a tough decision to make as each evolution offers different benefits.

The Three Kingdoms are finally starting to get their awoken evolutions, but are still considered some of the strongest subs in the game with only an ultimate evolution. This is because they combine fantastic awakenings, unique active skills, and great synergy for their respective teams. One of the best pantheons to date.

The Greco Roman 1 pantheon are some of the oldest monsters in Puzzle and Dragons and were some of the first to receive the coveted awoken evolution. This propelled the pantheon into some of the strongest cards at the time as it was the first wave of a new type of powercreep. However, they have once again fallen into mediocrity and are once again in need of an overhaul/buff. They all have situational uses, but only somewhat shine in their awoken form.

The Hero Gods have stood the test of time and powercreep and are still considered some of the strongest monsters for the respective teams. With the introduction of a Bankai evolution, they gained a significant boost to stats along with a third typing that unlocks new sub potential on various teams. Awoken Pandora

is the only one to receive an awoken form and has catapulted her into a top tier leader. Overall one of the strongest pantheons.

The Chinese Celestials are one of the most loved and oldest pantheons. Perhaps it is because they put the waifu in Puzzle and Waifus or that they were the first full board changer released. Regardless, GungHo has treated them well with a powerful awoken evolution that open up new uses and further augments their power. They generally make stellar mono colour subs and even Awoken Sakuya

who has always been a high end lead now can be used as a sub for her bind clearing active. Overall a pretty and powerful pantheon.

The Sengoku pantheon is surprisingly powerful even without the release of an awoken, let alone ultimate evolution. This is nearly unheard of in today’s meta of cards having 7+ awakenings and 800+ base stats. However, their actives are on par or stronger than many awoken forms and this is what makes them shine bright. I can only imagine the kind of power they will have once they do receive additional evolutions.

The Mechanical 1 Pantheon is relatively new and features Machine / God type monsters. They have an interesting set of awakenings and provide 2 skill bind resist

along with a powerful active that removes jammer and poison orbs. They can also form 16x leads with 51% damage reduction from 4 different elements. However, their main downfall is a lack of an ultimate evolution and will only be a matter of time before they gain strong potential.

The Mechanical 2 series are one of the newer pantheons and feature monsters who have a hard time fitting in due to a lack of synergy. Only Hamal

can be effectively used presently and it would be best to avoid rolling for this pantheon until more cards are released or the jammer meta is more solidified.

The Archangel Pantheon all feature Bankai evolutions. This means they all have an ultimate of an ultimate evolution which grants them 3 typing, numerous awakenings, and large weighted stats. Despite being one of the oldest Pantheons, GungHo has kept them relevant in today’s meta. They make poor leaders and only come into their true power later into the game and will be passed over for other options for newer players.

The Japanese 1 pantheon has some of the strongest awoken evolutions in the game. They provide valuable utility for various teams and several are great candidates for contributing their active for skill inheritance. The main drawback is a lack of usability prior to being awoken and will be neglected until acquiring the evolution materials.

The Norse Gods all have their awoken forms and grant 2x damage for their primary and sub elements along with forming powerful tank teams. They are mostly used on their respective mono-colour teams, but can sometimes play a role in rainbow teams due to enhancing two colours and providing double skill lock resist

awakenings. Lastly, by boosting damage for two turns, you can use on the floor prior to the boss to ensure you sweep it while conserving your other actives.

The Egyptian 1 pantheon features a diverse array of powerful monsters who both excel in leadership and new found sub potential with the advent of more challenging dungeons. Many make stellar leaders for a beginning player as they will teach you how to combo and manage your colours/orbs efficiently and transition into powerhouses with their awoken forms. Overall, a strong pantheon to roll for.

The Egyptian 2 pantheon is in an awkward place in today’s meta. They are a relatively new pantheon, but old enough to not have kept pace with the rate of powercreep. Furthermore, none of these cards have an awoken evolution (and probably will not for some time) and this further diminishes their value. Relatively speaking, they make reasonable subs for their respective teams, but may be outclassed by other options.

The Kalis and Mechanical GFE are some of the most powerful and desired monsters in Puzzle and Dragons. All five posses amazing actives and unique sets of awakenings. They are some of the best cards for their respective roles and all are worthy of the Godfest Exclusive title.

The Sonias are reknown as the pioneers of bicolour board changers and forming high recovery teams. Due to the nature of their active, they tend to excel on row based teams as you are almost certain to have two unique rows of your primary colour and have the potential to unleash explosive burst damage. On the other hand, Gadius and Typhon have a more utility based active that can generate heart orbs and can be comboed with other orb changers for critical damage. Unfortuantely, only Blue Sonia and Gadius see action in the current meta and the others will remain placeholders for more ideal cards.

The Odin are some of the oldest monsters in Puzzle and Dragons that have been receiving numerous small buffs to try and regain their viability. On the other hand, Ilm and Zuoh are two newer Godfest Exclusives who are powerful options for their respective teams due to their full board changers.

Sherias and Baldin are two new Godfest Exclusives and provide more diversification and utility for their respective teams. They are also capable of forming unique teams provided you have the correct subs with Sherias being one of the best starting rolls available. On the other hand, the Norns (Urd, Skuld, and Verdandi) make Fantastic subs on their respective mono colour teams due to their tri-colour board changer that also produces heart orbs. This can be used in conjunction with another orb changer or grant the opportunity to heal and deal damage on the same turn.