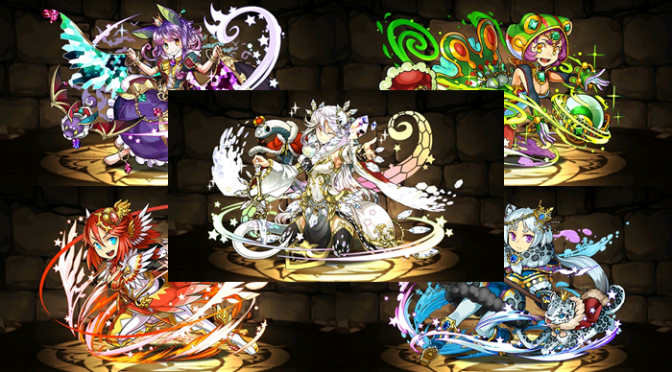 The Gemstone Princess Series is a new pantheon that is only obtainable through their respective colour carnival/gala. They all feature unique damage enhancement multipliers that scale based upon specific awakenings on your team. This allows them to achieve significantly higher multipliers compared to other options. Unfortunately, they all lack an ultimate evolution and only have average awakenings for themselves. In this article, I wish to explore the viability of the Gemstone Princesses in both a sub and skill inheritance assistant role. Hopefully they all shine bright like a diamond.

Princesses at a glance

Each princess provides a damage enhancement based on the total number of a specific awakening for your entire team. Thus, Carat

will grant 1.3x per Skill Boost

1+0.3*n where n is number of the respective awakenings

Silk is the only exception to the multiplier formula as those awakenings are much more abundant. Thus, she becomes 1+0.15*n.

Princesses vs other damage enhancement

There are other cards who do provide enhancement, but I want to compare the Princesses to the other pantheons that are dedicated to damage augmentation.

*The Princesses require at least 5 of their respective awakenings (10 for Silk) to achieve 2.5x damage. You will most likely have significantly more of those awakenings and will benefit from a massive multiplier.

The Puppeteers change the boss to the element their respective mono colour team does 2x damage to. For example, the Green Puppeteer (Courage

) turns the boss into the water element and is a permanent change. Thus it counts as a 2-4x multiplier (4x if the boss was fire to start with).

The answer to this question boils down to what kind of damage requirement you are needing. Furthermore, you also need to determine if you are using them as an assistant via Skill Inheritance or as a sub on your team. If using as a sub, the Norse Gods are the clear winner as they have an Awoken Evolution, amazing stats, and powerful awakenings. The Gem Princesses would mostly be used as a potential bind immune, recover bind

sub if you are lacking other options. Conversely, you could also inherit a bind clearing active onto them, but that may be counter intuitive for the burst component. However, if you require a damage enhance via Skill Inheritance, the answer becomes less clear cut. Do note the Puppeteers cannot be used as an assistant for Skill Inheritance.

The Gem Princesses will achieve the highest multiplier, but only provide damage enhancement for a single turn. This will almost always ensure you can burst down even the toughest bosses and can also help conserve other actives as you require less orb generation due to the high multiplier. It also means a less developed team can spike down bosses you normally could not attempt. On the other hand, the Norse actives provide 2 turns of damage enhancement along with a single turn of haste. The main purpose of having the extra turn of enhancement is to use them on the second to last floor. This enables you to sweep the floor prior to the boss with less/no other actives while still retaining your final burst for the boss. This is invaluable in Arena on floor 19 and the Kali along with Rogue Descends such as Gainut or Nordis.

The Puppeteers are a 250k MP monster that cannot be used as an assistant for Skill Inheritance because they did not come from the Rare Egg Machine. Thus, you have to use them as a sub. Other drawbacks include low base stats, the 250k MP price tag, and average awakenings. However, their true power comes from their active as it will permanently transform the boss into an element your mono colour team is strong against. Thus, you will be benefiting from a 2-4x multiplier based on the original boss attribute. This is the longest lasting and somewhat strongest damage enhancement option if you need to grind out a particularly challenging boss (think Arena Kalis). Just be aware they only work for mono fire, water, and wood teams.

Lastly, you should probably not use the Armour Knights unless your entire team is that typing or no other option exists.

The Gemstone Princesses offer amazing burst damage at the cost of a higher cooldown and only a single turn of enhance. The damage multiplier may be a bit excessive for the majority of content, but ensures you sweep that floor while enabling less developed teams to take down a boss that would otherwise be impossible to kill. For most content, the Norse God’s active should be sufficient while being on a shorter cooldown, providing haste, and two turns of enhancement. Finally, the Puppeteers are a luxurious option for mono fire, water, and wood teams.

Let me know how you plan to use the Gemstone Princesses and which artwork you like best.

32 thoughts on “Gemstone Princess Series: Next Generation for Damage Enhancement?”