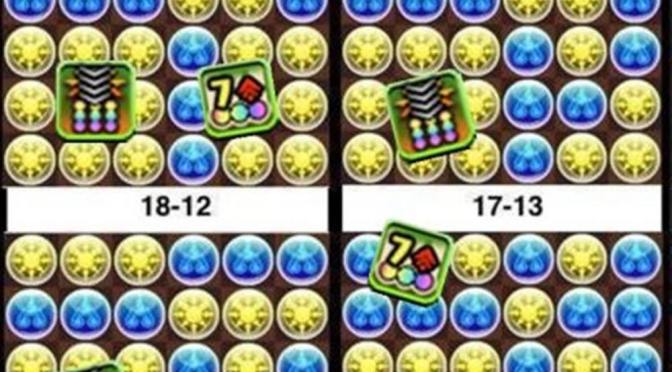 Puzzle and Dragons is a challenging game as it combines numerous different elements but the orb solving/puzzling aspect is one of the most endearing aspects. Despite playing for over 2,000 days, I still have lots to learn about optimally solving various boards want to dedicate a post to better solving these.

For the most part, utilizing a bicolour board is the best way to optimize your potential as it usually yields the highest number of combos along with the most concentrated damage. With that being said, there are more optimal ways for solving these for both vanilla combos and for specific awakenings.

This compilation was put together by Miso who has agreed to let me reuse his own work along with the works of others. None of the following images are of my own creation and as quoted by Miso, “Here is a compilation of optimal boards from a variety of authors including netete, hey, 村人A, members of the Puzzle & Dragons Reddit community, and myself.”

As a little background on Miso aka Brandon Wong, he is an engineering in training who enjoys swimming, hiking, badminton, solving puzzles, and of course playing Puzzle & Dragons. Brandon is always more than willing to give advice on any of the PAD Facebook groups and loves Halloween Cotton. For anyone who wishes to add him in PAD, his in-game name is Miso⨻ (351,924,306).

–if you want to see something beautiful, look in a mirror–

There are numerous ways to approach solving a board and the easiest to initially do so is Brute-Force it. Brute-Forcing is the idea of stacking combos without adding in and Cascades and does work in many cases. However, being able to rearrange the board in such a manner that combos fall into place at a delayed rate (Cascading) gives a higher chance for a Skyfall (additional combos matched by orbs falling down) to occur.

For the most part, the chance for a Skyfall to occur with any matched 2 orbs is 1/6 but when you Cascade, you give yourself another opportunity for the right orb to fall into place. As such, Cascading tends to be the superior option if one is able to do so.

The best way to practice these Optimal Boards is to enter Endless Corridors, use bicolour board changers, and solve the appropriate pattern. Another and somewhat productive method is to enter the 2 stamina Normal dungeons and take a Best Friend. This will yield 100 Pal Points and gives you a way to use up stamina if close to ranking up.

Regardless of which medium you choose to use, the key is practice until the patterns are memorized.

Credits, if any, are within each image.

Conversely, you can use any

Discord server with Miru Bot and type the following commands to pull up a single image for your optimal board: ^boards.

All of the following images have mouse over text for their specific use.

One of the most important skills to learn is how to optimize a bicolour board into the most number of combos possible. Brute-forcing/regular stacking will sometimes yield the same number of combos but fall behind for worse distributions along with losing out on the opportunity for Skyfalls via Cascades.

optimal boards is one of the most vital skills to learn as it is a commonly seen mechanic. Furthermore, many VDP cards rely on hitting 7 combos to tap into their full damage potential.

is the most efficient way to deal with Resolve spawns which have become quite common in harder content.

matching has become more popular due to Fatalis

but other leaders may benefit from these boards.

is awkward to fully utilize but knowing how to optimally separate a board can be invaluable.

teams are starting to make a resurgence and hopefully with the built-in combo leader skill mechanic, these boards will become more relevant.

Despite the fact that Heart Crosses are out of the Meta, it may have some relevance for those who still enjoy this play style.

Using 7×6 leaders grants the player an additional 12 orbs for a potential of 14 combos. This extra space can be invaluable for various team compositions as the average combo count will be significantly higher along with various patterns being easier to achieve.

The following section includes various matching styles that may have relevance for more than just the listed leader.

Puzzle and Dragons has evolved over time into a complex game that requires players to match various patterns under pressure. By having a template of an optimal solve, players will be able to better overcome the matching requirements when faced with problematic mechanics.

For the most part, Optimal Boards are confined to bicolour boards and memorizing the patterns will greatly improve your solving skills.

Let me know what you think about Optimal Boards in the comments below and which patterns you have found most helpful.