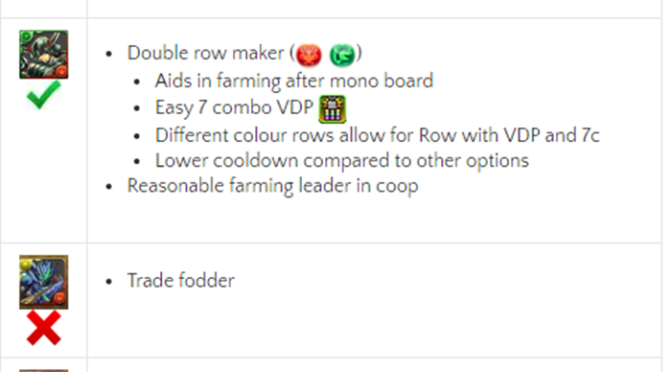 The Monster Hunter Collab is in full swing and one of the more exciting features is the inclusion of the Male and Female Hunters. These cards are able to be evolved into a total of 12 distinct evolutions while also having the option of exchanging either 3 Evolved Male/Female Hunters for a special new Hunter.

This article will provide a brief summary of what each Hunter does and where how they can be used along with advice on whether the 3:1 Hunters are worthwhile.

During the current Monster Hunter event, players will receive one base Male Hunter in the mail and an earn an additional Male and one Female from clearing the Monster Hunter dungeons. As such, some players will be in possession of several Hunters. In addition to these free Hunters, each base form can be purchased for 200,000 Monster Points.

In addition to these Hunters, the new Valkyrie

Hunters require players to Monster Exchange any 3 evolved Male/Female Hunters. As such, players can technically acquire either one of these as we are given 3 base Hunters with the current event.

There are a total of 6 evolved Male Hunters plus Zeus being the “Super” Hunter that requires 3 evolved Hunters to acquire.

All Hunters have gained Limit Break + Super Awakenings but this can be somewhat moot as many rely on multiplayer to function so all they may have gained is additional weighted stats. Furthermore, all Hunters can be used as an inherit if the active skill is appealing.

For the most part, the 6 Evolved Hunters have varying degrees of value and is a matter of finding what you need most in a card. As such, following table will summarize their main roles:

Which Male Hunter to make?

For the most part, the Male Hunters have relatively niche use but for the average player, pursuing Auroros Gear

Hunter would be best. This is because he can function as a double row maker to combo with mono Water, Light, or Dark boards. Doing so will result in a 7 combo VDP

board as one will always have an 18-12 split that can form a row due to the dual colour nature. Of course this also means players cannot use Fire or Wood boards so they may have less options.

Unfortunately, this is primarily used for farming purposes and we have also had the opportunity to acquire two other double row makers via Collab Monster Exchanges (Eugeo and Saber Assassin). Of course, if you missed out on those options, this should be your top priority. Finally, Auroros Gear can be used as a reasonable farming coop leader as he only needs to connect 6 Fire or Wood orbs.

If Auroros has no interest for you, the  Nergigante

Hunter may be an option to act as a powerful Button when used on a team with high Wood and Dark ATK. His natural Coop Boost

helps bolster his stats and his nuke hits all enemies. With that being said, this will be a heavy investment as it does require players to have duplicates of himself and Buttons are not for everyone.

may be an option if lacking a strong leader for coop play or simply want flexibility when playing with new players. Blue Hunter has reasonable multipliers but his main crux is the need to be used in coop along with an average board having 7-8 combos and his maximum multiplier maxes 10 combos. As such, his total multiplier will be lower along with him lacking bind immunity or personal damage.

Taking all of this into consideration, if none are appealing, players can use

as trade fodder for Zeus Hunter and the other three for Valkyrie Hunter.

There are a total of 6 evolved Female Hunters plus Valkyrie being the “Super” Hunter that requires 3 evolved Hunters to acquire.

All Hunters have gained Limit Break + Super Awakenings but this can be somewhat moot as many rely on multiplayer to function so all they may have gained is additional weighted stats. Furthermore, all Hunters can be used as an inherit if the active skill is appealing.

For the most part, the 6 Evolved Female Hunters have varying degrees of value and is a matter of finding what you need most in a card. As such, following table will summarize their main roles:

Which Female Hunter to make?

Compared to the Male Hunters, the Female variety feels significantly weaker due to the fact that none truly stand out as stellar options. As such, I would not be inclined to pursue any of these heavily and would only keep them if their particular niche feels appealing.

Valkyrie and Zeus Hunter are a special kind of Hunter as they require a combination of three Evolved Male and Female Hunters to Monster Exchange for. This means players will have to do a certain degree of farming and their effective cost is 600,000 MP (200,000 for each Hunter).

With that being said, these two cards have a fair amount of value and it is a matter of determining which one has the most merit for your Monster Box.

One thing you have to keep in mind is that these should be viewed as “free” cards and their power is kept in check accordingly.

as both require players to remain at full HP while also providing a large ATK multiplier for minimal effort. Unfortunately, Zeus Hunter feels more niche by comparison while also requiring 2 combos. It may sound strange that 2 combos is a problem, but it is slower and cannot solve mono-colour boards. Furthermore, his Gravity is not a True Gravity so it may be harder to use for cheese purposes. Furthermore, the auto healing component is less amazing because the healing occurs after matched orbs so it will not push him back up to 100% for his full multiplier.

For cheesing, players will often use Zeus & Hera (45% Gravity) twice followed by a 30% True Gravity to instantly kill a spawn (or 30% Gravity followed by two Zeus Verse). With that being said, a 45% followed by 35% Gravity will push the spawn down to 36% HP which is out of range of any True Gravity option currently available. As such, it may be harder to incorporate Zeus Hunter into these compositions.

In regards to his assortment of Killers, they can be helpful, but one has to remember that they are only truly helpful against spawns with at least two of those typings in order to tap into 9x personal damage. With this in mind, 9x is reasonable but his 22 turn cooldown for a niche active is hard to justify using over other options. The same can be applied to his 3 Jammer Resists

: use other options to achieve 100% resistance.

All in all, I am not too impressed with Zeus Hunter and feel players would be better served by making Valkyrie Hunter.

along with reasonable offensive potential. This is important for players who were unable to acquire any 60% Weapon Assist as this can greatly ease team building requirements. Furthermore, Valkyrie Hunter has significantly better awakenings compared to other farmable Poison Resist options which means she can be incorporated into many teams with less hassle.

In addition to this, Valkyrie Hunter is able to provide 5 turns of Awoken Bind clearing which has merits in quite a few dungeons. Unfortunately, she is not without faults as she has naturally low stats and is vulnerable to binds unless playing with her Super Awakening. If bound, players will lose their 60% Poison Resist and many compositions do not run traditional bind clearing as it is presumed all things are bind immune.

As leader, she is able to build a reasonable team but her Healer restriction may be problematic and chances are players have a stronger option available.

All in all, Valkyrie Hunter is a reasonable investment and will probably help newer players who have yet to fully develop their Monster Boxes or those who were unable to roll a 60% Poison Weapon Assist.

The Hunters feel weaker this time around due to the fact that Blue Hunter has lost their role as a viable coop leader. Furthermore, only a few feel viable under unique situations so it is up to players to determine what is best for their Monster Box.

While this may feel disappointing overall, one has to remember that these are essentially free and GungHo tends to not be too generous for non-REM cards.

Let me know what you think about the Hunters and which one you plan on making.