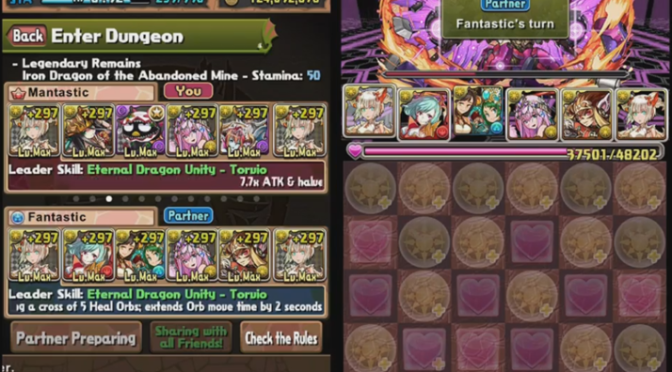 The new Technical Dungeon, Legendary Remains,  was released yesterday as part of the previous maintenance. Legendary Remains features numerous new and dangerous mechanics that requires careful planning to succeed. I managed to clear this dungeon on my first try on my Twitch Stream despite a few surprising skyfalls that forced me to go through the dungeon faster than I intended.

I used what is essentially my standard Myr team, except I brought along Pierdra Badtz-Maru

in order to remove the locked orbs and Zeus & Hera

for their gravity to bypass the final floor’s resolve. Pushing the boss under 50% would result in either a large hit + bind, massive combo shield, or an execution hit. Thus, the board refresh and gravity allowed for an easier kill as I could simply kill him right away and avoid the dangerous mechanics.

The cloud column is a new twist on hidden orbs as it will prevent you seeing the orbs while moving. You are still able to tap the orbs to reveal them along with moving through the cloud column, but you will have to be careful as you cannot see the orbs mid match.

Floor 6 causes your leftmost column to become “locked” in that you are unable to move in those spaces. You can still interact with those orbs via matching horizontally alongside of them, but you will be unable to move or manipulate them.  This becomes problematic if a bomb orb spawns there.

I never actually let the bombs explode as I was able to either match them or orb change them away. However, from what other people have observed, they will explode if left unmatched and deal damage based on the number of orb surrounding it (maximum 4). I am not sure of the exact damage dealt, but I am certain it is not good for your health.

Legendary Remains is an interesting dungeon that presents players with new and dangerous mechanics. The dungeon itself did not feel as challenging as the previous ones in the Technical section, but that could be partially attributed to Powercreep and the cards we have available.

What did you use to clear this dungeon?