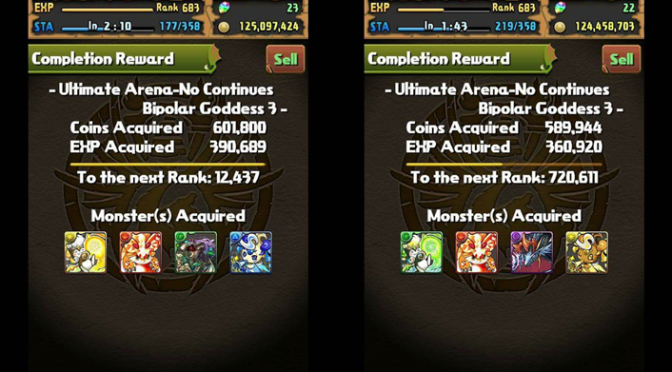 Arena 3 is now half stamina (and double rank EXP) courtesy of the latest maintenance update. This will allow more players the opportunity to play as it is less punishing from a stamina point of view. At the time of this posting, I have what I guess is 100 clears (and 29 Radar Dragons) and will begin to diversify the teams I have use and plan to play other interesting leaders due to the reduced stamina cost.

This post will be used to keep track of all the teams I have used to successfully clear Arena 3 and will be edited as changes are made or as new teams clear the dungeon. I will be revamping/re-releasing a comprehensive Arena 3 guide in the near future as I wish to keep these two thoughts separate for easier reference.

Just keep in mind that many teams are capable of clearing Arena 3, but will require varying degrees of luck and favourable Radar Dragon encounters to succeed. Remember, strange teams may only be able to clear one of the five Radar Dragons and would also need easy spawns leading up to them etc.

As a final note, I am missing most of the end game leaders/subs and will probably never be able to play them, but that does not mean they are incapable of clearing Arena 3. Thus, this post will only show what I have at my disposal.

I highly recommend you watch my

Twitch Stream from time to time as I regularily clear Arena 3 there.

Arena 3 is a grueling 24 floor dungeon that features some of the hardest encounters in the game. Furthermore, each floor is chosen randomly form a fixed pool of spawns that can further hinder team building decisions, but here are a few guidelines to keep in mind (I will go into further detail in my Arena 3 guide):

I have found that a poison, delay, or optimal board burst is better than true damage against the PreDRAs. Poison allows you to set up your board against the following floor as well as preventing the jammers from Parvati. A delay is always valuable and can can help you stall out later floors, avoid resolve, or simply take a moment to recover. Finally, massive burst damage means no wasted active slots against PreDRAs.

All of the following teams have successfully cleared Arena 3 at least once. Their consistency varies; however, I am doing my best to improve them on an individual basis through better latents, inherits, or sub choices. Any changes made in the future will be reflected here.

Team A designates the player who is to absorb the Hephaestus 15 turn delay (by killing floor 21). They may possess either more utility-based actives along with having long inherits to help prevent their base active from resetting. Team B is the side that ideally has the more offensive actives and has a lower dependency on Skill Inheritance to act as pseudo delay protection. They may possess your burst combo or various orb changers and ideally has no utility.

My Myr teams boast the highest win rates (guesstimating 95%) along with being responsible for the majority of my clears. My teams have undergone numerous changes to better min-max my chances of success and I am relatively happy with their current set up.

The team is heavily invest in Skill Delay

latents as I plan on using this team for other end game content.

Another nice aspect of Myr is the relatively quick clear times. This is partially attributed to playing the dungeon so many times, but also due to the fact that a heart cross and TPA kills many of the earlier floors. A single row will kill everything outside of the end floors.

The team relies heavily on the Saria + Wedding Akechi burst combo as it results in around 10 million damage per card with an optimal board set up.

I use the poison as it can be challenging to always hit over 10 million on the PreDRAs.

I discuss this team in more detail HERE.

Krishna is my second most used leader for Arena 3 and has around a 70-75% win rate. This is largely attributed to inability to kill Hera Dragon without an inherited shield along with somewhat difficulty hitting under 2 million due to the heavy variance in damage from enhanced/non-enhanced orbs. Being a non-heart cross leader means you are more vulnerable to gravity-based attacks along with leader binds further decreasing your chances of success.

Due to the orb hungry nature of Krishna, his clears are somewhat slower due to the heavy reliance on requiring 9 fire orbs to deal sufficient damage. This usually results in active skill usage along with restalling on easier floors or an attempt to hoard 9 fire orbs without an active.

Krishna is still a very powerful leader all around and has room for improvement through better latents and inherits.

Compared to my Myr team, Krishna is relatively short on full board changers and this can put constraints when dealing with Beelzebub as there are fewer opportunities for optimal burst boards.

More information about my Krishna team used for Arena 3 can be found HERE.

Reincarnated Lakshmi has proven to be a fun and fast-paced leader to play in Arena 3. Unfortunately, she is not very consistent due to the struggle she faces against Gaia (must bring a shield to tank the turn 3 and 6 hits along with water versus wood) and Hera Dragon as you must have a shield and have very few turns to kill. Furthermore, Noah Dragon can be problematic as you cannot survive the Second Judgement attack without a shield. Thankfully, Zeus Dragon is still an easy encounter.

Negative aspects aside, Lakshmi is still a powerful leader as you are able to fully recover your HP with very few heart orbs along with being less orb hungry as you require two different elements as it is far easier to hoard 5 hearts and 4 water than 9 fire. Lakshmi is well equipped to deal with all the floors leading to the Radar Dragons.

I rely on an optimal burst board to kill the PreDRAs and this only fails if it is two wood ones spawns.

Most of the team was already +297 and had latents as I did use Blue Sonia long time ago and still utilize Sarasvati.

I was able to record one of my clears for Reincarnated Lakshmi but have mostly found myself using her to quickly clear Arena 1.
—

I only have a single clear with the Wonder Twins as their glass cannon nature is vulnerable to nearly every mechanic along with the pressing need to have activatable boards. It is challenging to heal and deal damage with Awoken U&Y as their active skill removes heart orbs so you have to either find a floor to stall and heal more than the incoming damage or orb change and proceed. It is also challenging to accommodate a bind clear, shield, board refresh, and orb changers as pretty much everything can and will kill you in Arena 3.

144x (2 water, 1 wood, 1 dark, 1 light) is usually enough to kill the majority of the spawns outside of wood bosses. Throwing in a water TPA skyrockets the damage, but this still means you are reasonably orb hungry. 400x kills pretty much anything.

On the plus side, U&Y is capable of clearing Gaia Dragon which is not normally possible for most water teams.

I have since changed my team as I plan to play more Arena 3 with Awoken U&Y and I will show both the old and new team.

This team should have marginally more success due to additional movement time and an extra board changer.

one day. Below is my video clear for U&Y:

My hope is that this post provides some inspiration into how a variety of teams can tackle Arena 3. I plan on updating this post as new clears come in or modifications to existing teams are made.

Let me know what you have used to clear Arena 3 and how consistent you feel it is.

17 thoughts on “Teams I Have Used to Clear Arena 3”