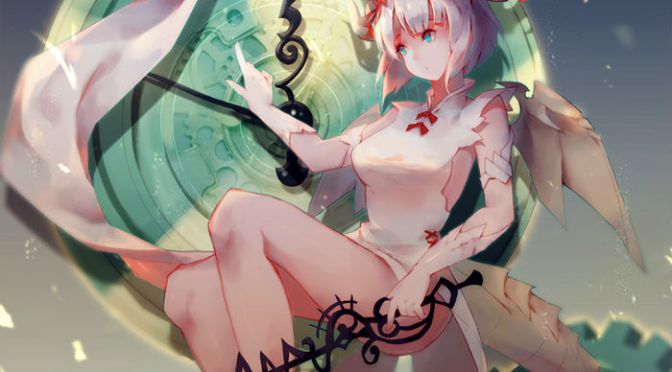 For those who have been following my website or regular Twitch streams, it becomes apparent that I have a certain soft spot for the Myraculous Myr

. I use her to clear all current content including Arena 3 and most recently, Machine Athena. Furthermore, she will be receiving a leader skill buff to 59.29x ATK in the very near future which will augment her already impressive damage output. As such, I wish to use this article to discuss how the buff will impact her capabilities as well as going over my current team set up and discussing the changes I have made since her release.

These are other relevant articles I have written about Myr and will reference their content here. If you have not already read them, I strongly advise you to do so as it will give you a better base for understanding how Myr works.

Myr is scheduled for a leader skill upgrade that will change her from a 49x ATK lead to a 59.29x ATK while retaining her 75% damage reduction shield. To compensate for the leader skill change, her second evolution will be buffed to the same stats as her final form and will cap out at 49x ATK. In all honesty, this buff was unnecessary as there are countless other cards who actually need the buff, but it can be hard to complain when she is my favourite card/leader. Even though this is a buff in most situations, the higher multiplier can be troublesome when facing damage absorption shields.

A lack of damage control

Myr has always struggled with damage control as she was an all or nothing girl: 1x ATK for no heart-cross and 49x ATK with the heart cross. There is no middle ground and it could make certain encounters frustrating, most notably Parvati in Arena.  Parvati heals herself from any damage dealt that exceeds 300,000 and this means that you must make a heart cross, 1 light match, and 1 other combo to avoid the heal for most +297 teams. This could change to 2 combos for teams with heavy light orb enhance

awakenings and with the incoming leader skill buff, it may be impossible to deal the appropriate amount of damage for some compositions. Granted Parvati is only a single floor (1/4 or 1/5 spawn chance), but is worth noting. Other damage absorption bosses are still doable as they offer a higher threshold and thus have a larger margin for error. For players who use Myr extensively, you should take some time to retest your damage output in Endless Cooridoors to better familiarize yourself with how many combos are needed for 300k, 500k, and 1 million values.

Outside of the damage control issue, more damage is pretty Fantastic. This will allow you to burst for higher damage which may result in not needing to bring a damage enhance sub or enabling you to sweep floors with fewer combos/rows/TPA/actives/etc. This will improve your clear consistency in harder content as you will have more room for error/bad boards.

Overall, the buff is a massive upgrade as it will allow you to clear more content with a less invested team/actives/matches/etc.

When deciding which subs to bring for any challenging encounter, you want to maximize their value by striking a balance between active synergy, awakenings, and base stats. Through Skill Inheritance, you are able to further customize your team to your liking by bringing ideal bodies who can then inherit a stronger active. Of course, you have to use what you are given and it can make for some interesting team compositions.

I have made quite a few adjustments since my first clears to increase my consistency (that post can be found HERE).

For my latent choices, the Recovery

have 4x the value on Myr teams due to the 75% damage reduction shield. You also want to have at least one rainbow resist per team to better avoid 100% gravities when you do not have a heart cross shield (Hera-Is is one noteworthy scenario after she binds you and you clear the binds via heart row). Finally, I made the plunge to invest in Skill Delay

latents to improve consistency in the highest tier content.

This is a personal choice, but I like to have at least 1 recover bind

sub on each team as it will allow me to clear any binds without having to sacrifice a sub slot/active. Granted I will most likely not be able to heart cross at the same time, but you should hopefully be able to survive the subsequent attack.

My set up is mostly based around Arena 3, but is relatively applicable to any dungeon that does not have too wonky/outrageous mechanics.

To deliver lethal damage, I use my Saria + Wedding Akechi burst combo to produce a 2/3 board of enhanced light and 1/3 heart orb board.

I try to avoid Gadius

style board changers as he produces 4 elements and is a gamble to have an activatable board if used as a stand-alone active.

is one of the strongest bases for Skill Inheritance as she has favourable awakenings, high base stats, and a 4-turn cooldown. This allows you to easily inherit an active of your choice without sacrificing passive power due to a weaker card. It is a shame the other cards in the Greco-Roman pantheon are scheduled for a reincarnated evolution as this could have propelled Venus dramatically forward.

I chose to use Venus as a base for my Penta-max Saria on Mantastic as I had enough health with Paimon to survive any reasonable hit and the added row, enhanced orb, and RCV outweighed Saria’s high HP. If I had a second Venus on Fantastic, I may replace the Saria, but maybe not.

in the most recent Godfest. Apollo can work in shorter dungeons where you are only going to be using actives once, but will struggle to find viability in longer content when you are expected to use the same active multiple times.

Awoken Apollo converts hearts and dark orbs into light along with granting two turns of light skyfalls. This is a lot stronger on non-heart cross teams; however, you must use another active in conjunction to actually trigger your leader skill. This is where things become problematic as you should be able to deal spectacular damage with two actives, but Apollo + heart maker does not. You may be able to form two rows and a heart cross, but you will be less effective than a Saria/Wedding Akechi or Apocalypse/DQXQ board as those 2/3 light, 1/3 heart boards result in more combos due to staggered cascading. Furthermore, the other combo options can be used as stand-alone actives whereas Apollo cannot.

You could always inherit an active onto your Awoken Apollo (which I did), but that still does not solve the problem of his frusterating base active in longer dungeons after you use the inherited skill.

awakenings and high base attack. This has resulted in many deaths due to him hitting too hard on absorption bosses such as Vishnu or Hera Dragon as there are times where you have to go for the TPA match (or higher combo count), but having one sub healing instead of damaging the boss results in very little damage dealt overall.

Even with all those short comings, Awoken Apollo can still be viable on a variety of teams as his high base recovery and enhanced heart orbs

are wonderful, but I am happy to have finally replaced him.

in tow. This was just what I needed to replace Apollo as Paimon has a powerful base active along with favourable stats/awakenings. I am going to miss the higher recovery along with the enhanced heart orbs, but the additional passive damage from two more light orb enhances

do provide a nice compromise. Furthermore, I do not run the risk of overkilling a boss with a TPA match as I now have no dual two prong attack cards. This comes as a huge relief for absorption style bosses along with not being as worried about a poor base active skill.

Despite all of these wonderful advantages, Paimon does bring some headaches, but only on Parvati. Mantastic is only able to match a heart cross and 1 light combo to not surpass 300,000 damage and with the future Myr leader skill buff, I am worried about never being able to kill her before the 99 turns. This change does not affect Fantastic as the enhanced orb awakenings bonus only impact the respective team the cards appear on.

Cards I wish I had

As with any team I build, I am always using non-perfect cards and do have to use creativity to help fill in the gaps. The differences in overall power may be small, but they are upgrades and can make a difference when used numerous times in challenging content.

Mantastic is somewhat reliant on the dual Wedding Akechi

on Fantastic’s account to succeed as his burst combo results from a Saria board followed by Fantastic’s Myr. Thus, owning a Wedding Akechi would greatly enhance his potential as I could inherit him onto any of my current subs that are not Saria boards.

Another area for improvement is using Wukong

as he has superior stats, active, and awakenings. As mentioned above, I like having one card per team with the recover bind

awakening to alleviate sub constraints. In addition, I would most likely change Wukong’s active skill as both a means to protect against skill delays along with gaining an ability that has more synergy (Wukong’s active has no combo potential).

has perfect synergy with DQXQ along with Fantastic awakenings; however, he also runs the same risk as Awoken Apollo with the dual TPA awakenings. Thus, he may simply be used as an assistant via Skill Inheritance. I also like the art.

also solves the recover bind dilema but is not feasible to acquire. I would also need to upgrade his active via Saria.

In hindsight, I should have had Saria inherited onto Myr (and Sylvie onto Paimon) so I would have access to another Saria board for Fantastic. Time to farm more light Tans and I will be able to make this change next time Tan Infestation rolls around.

I am quite happy with Fantastic’s team and am mostly waiting for Saria to receive her ultimate evolution. Perhaps I could acquire an additional Venus or DQXQ to use as a base for Saria and to protect my original DQXQ from skill delays. Regardless, these are small changes.

Myr is still my favourite and powerful team to run. She offers both survivability and offensive capabilities all rolled into one age-defying girl. I wish her final evolution had her second form’s art, but I cannot pass up on the stronger stats and future leader skill buff.

Let me know what you think of my Myr team along with what your sub/inherit set up looks like.

Happy Puzzling! (and Thanksgiving to all my fellow Canadians!)

Myr art is by vien@お仕事募集中 at pixiv.net (Direct link to image can be found HERE)