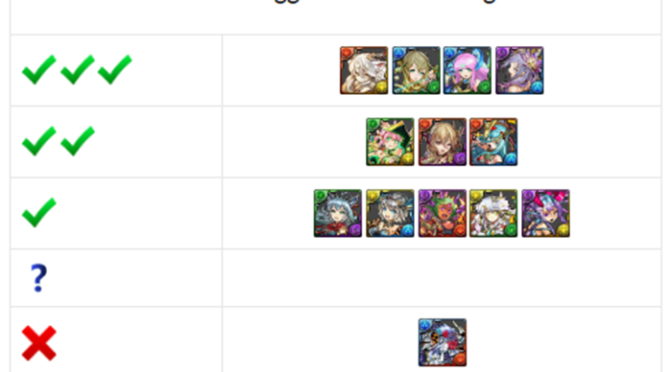 The Heroine REM is returning to NA/EU with new ultimate evolutions and two brand new cards. The first time this special REM came around, I did encourage people to roll in it despite the 10-stone cost. This is because essentially all of the cards have merits and value for a more developed Monster Box. Furthermore, since they were all new at the time of their release, the chances of rolling dupes was significantly lower. As such, the motivation to roll or not to roll should be based on your own requirements and expectations.

Despite new evolutions, not much as essentially changed for the majority of the cards as they were mostly small stat boosts plus an additional awakening. However, Ilmina

did receive a fluffier evolution that dramatically shifts their gameplay and usage. You can read about my original review of the Heroine REM HERE.

Amusingly, with the inclusion of Uruka

, the Heroine REM is stronger than ever as there are now plenty of amazing top tier prizes worth chasing. Just be aware that these prizes are in the 6+ star category so they will be rarer to roll.

*Rankings are in no particular order

For comparison to the other form

Ilmina is one of the 7-star roll from the Heroine Rare Egg Machine and will be one of the most desired monsters due to her flexibility through her two viable evolutions (and for being the ultimate fluff). We can broadly categorize her as either a Traditional Leader

card. However, Ilmina still retains her amazingly powerful active skill that combines a True Damage and full board changer. This will enable you to execute high defense monsters AND produce a lethal kill board for the following floor. This saves you an active skill slot when playing through challenging content or can even help with preserving time in Ranking dungeons or for efficient farming.

If you intend to use Ilmina as a leader, I would suggest using the Light/Fire form

due to the higher multiplier and better damage control due to the absence of Killer awakenings. While you may feel the raw multiplier numbers is on the low side (which it is), the 7×6 board and additional 12 orbs enable you to achieve a higher combo count as well as being able to match more primary colour orbs. Furthermore, pairing with Kenshin

will enable you to match significantly more colour crosses which would help offset the lower multiplier.

On the other hand, the original Ilmina boasts 4 Skill Boosts

and three Killer awakenings. This makes her one of the best farming cards in the game as she can help trivialize various encounters while ensuring you have your actives ready by turn 1.

active into one card. This has tremendous applications for rainbow teams or anyone who wishes to easily bypass Vishnu or Hera Dragon.

Dark Kali boards are the most desirable for rainbow teams as it ensure a minimum of 6 combos (almost impossible, most likely 7-8) and every element. This means you are able to heal and deal damage on the same turn. Naturally, this has most applications for Ra Dragon teams and Uruka would actually be an inherit on Isis

for a guaranteed kill on problematic floors. Furthermore, you at least still retain a board changer if those spawns do not appear along with a healthy stat transfer due to being on-colour.

Another application for Uruka is to pair her with other higher multiplier rainbow leaders to capitalize on her defensive benefits and 7×6 board. As such, Ra Dragon

is an amazing fit as the small dip in overall damage is compensated by the larger board. However, you may find the most value in the Kaworu Kali

as the larger board will raise their overall consistency.

Finally, her dark form has some merits on Dark Athena teams with her dual TPA and high weighted ATK to help her keep abreast with other desirable cards.

Julie is the second new card to be released in the Heroine REM and is the first relevant water leader that is not row oriented. Water has been severely lacking an end game leader who could utilize their growing TPA pool. Julie may feel akin to a Balboa

pairing (she even shares the same skill as Balboa), but has a much more proficient multiplier. The 2.25x HP is wonderful, but the damage mitigation enables you to survive execution hits without even needing to pop a shield.

I feel this places her close to Reincarnated Astaroth

‘s potency, albeit with a few key differences. Julie is far easier to activate and less orb hungry due to wanting two different elements instead of 6 wood orbs. This will naturally allow her to overcome combo shields with reasonable damage control (barring Killers) as you can choose to match a blob, 3, or TPA. The shielding component also means you can survive gravity-based attacks and your potential for burst damage is just as high and only ramps up when the appropriate Killers are triggered.

This makes Julie amazing in dungeons with high damage requirements as you are able to repeatedly burst throughout.

Unfortunately, Julie will suffer from a lack of damage control against Attackers, Dragons, and God type bosses while also being vulnerable to binds. Furthermore, her base active skill is redundant on two leaders as I cannot think of a scenario where you need to repeatedly break an enemy’s defense.

For the most part, the new evolutions for the other cards are underwhelming as it mostly provided a boost to base stats and one additional awakening. However, some are worth mentioning/highlighting.

Meridionalis is perhaps one of my favourite leaders as she combines ease of activation, consistency, damage control, and burst all into one. Furthermore, her new evolution makes her significantly prettier and we all know that is the real reason why we play Puzzle and Dragons.

(which she did not need) and a higher maximum multiplier if you connect 9 water orbs (again she did not need this). This is a real shame as the last thing she needed was more damage as she already blew things out of the water. However, the stat boost is always welcome and helps her achieve a slightly more respectable amount of health.

Meridionalis is capable of farming Arena 3 and Colosseum, but has a higher dependency on coop compared to the top tier leaders. This is because she is vulnerable to binds and lacks a health multiplier. Both of these force you to bring their respective counters and effectively clogs up your potency compared to teams that do not have to worry about those factors.

Finally, some players have found value in running Meridionalis as a pure farming leader and taking advantage of the perfect damage control and no skyfalls to ensure speedier clears.

. While this may feel underwhelming for the average card, Kuvia is far from average. This is because she boasts 4 TPA

awakenings and this ATK increase dramatically boosts her offensive capabilities to new territories. 1,516 ATK (without pluses) will be able to deal lethal amounts of damage on fire TPA teams and the extra Skill Boost helps ensure your actives are ready by turn 1.

None of the other evolutions are really worth mentioning and those cards simply fulfill their original role marginally better (most of them are used as assists via Skill Inheritance).

The Heroine REM is stronger with the new evolutions and two additional cards. However, if you already own the majority of them, it may be a costly venture to try and pursue the new additions. However, for players who do not own any (or very few), it is worth your Magic Stones as these cards are unique and tremendously powerful.

The key factor with the Heroines is that they provide new utility to your Monster Box and will have the most value for players who already have modestly developed accounts.

Let me know what you think about the Heroine REM and if you plan on rolling.