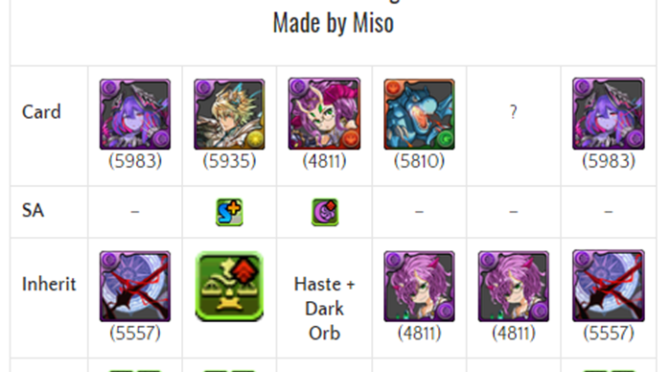 Training Arena 2 has been available within the Normal Dungeon tab for some time now and is an efficient medium to quickly level up your monsters. This is because it is only 11 floors long, has no mechanics (only huge HP/DEF), drops a random Latent, along with providing 12 million Monster Experience evenly split between all non-max level cards.

This is a hefty amount of Monster Experience and while there are countless teams that can clear the dungeon, being able to do so in a fast and brainless manner can be meaningful.

With this in mind, I would like to share the current build I am using which was created by my friend Miso and slightly adjusted to my own Monster Box. 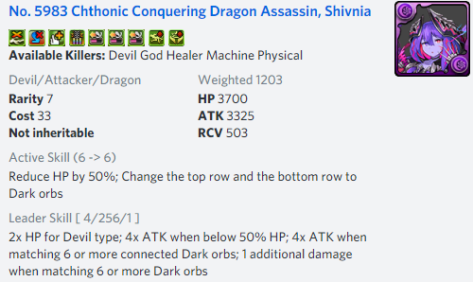 in order to create as mindless of a team as possible. This is achieved via Shivnia’s own massive personal damage combined with her double Row maker providing massive spike damage along with the opportunity to break up the bottom Row in order to preserve it for the next floor.

inherit is anything that provides a Balance Killer

uses any Dark orb generator that also provides Haste. It is also important to avoid matching Hearts on Floor 1.

In regards to the rest of my set up, it is reasonably rigid if you want to go as mindless as possible but at the same time, if you are lacking the two Chuan

inherits I have, you can replace them with either Eris Apples

or other Dark Row Assists. Just make sure you either test your damage or make an additional combo or two on floor 7 (Eschamali) and floor 11 (final floor) in case the loss of Dark Rows lowers your damage too much.

Another clarification I want to make is that on floor 10, you can use the now Transformed Dark Magician Girl

Farming Training Arena 2 is a lucrative venture as it awards 12 million Monster Experience along with a random Latent that can be easily swipe-farmed.

While going fast does not technically yield better drops, it does cut down on how much effort/thinking is required and can be a fantastic way to quickly dump stamina on busier days.

Let me know what you use to farm Training Arena 2 in the comments below.