Takeminakata Tournament – No Active Skills  is another ranking dungeon being released that somewhat levels the playing field as the no active restriction will be imposed. This automatically removes some silly cheese teams that had excessive rare subs that most players had no access to compared to earlier tournaments. This also means we will be solely based upon our matching skills and with only 5 floors, our amount of combos matched will also be rewarded.

There has been a lot of calculations done in order to min/max your ranking score and it has been determined that that in a 5-floor dungeon, additional combos and cascades/skyfalls help your score. This does not mean teams solely focused on speed will do poorly, but players who are able to match combos faster will be more heavily rewarded.

There are no silly mechanics such as 10 million defence PreDRAs

and the main hurdle to overcome for rainbow teams is the pre-emptive jammers on floor 3.

In these ranking dungeons, we are scored based on 3 criteria:

Taking a look at the JP server’s top 10 list, it becomes apparent that high time extend

to ensure consistent activation on floor 3. 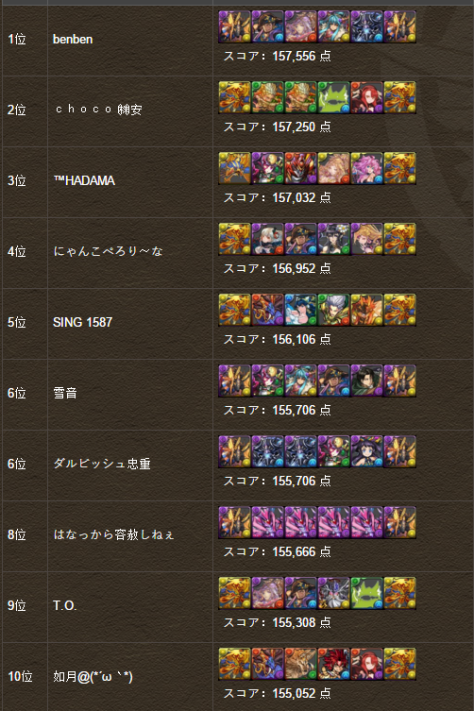 However, most players cannot assemble those teams along with not possessing the sheer skill needed to consistently activate their leader skills. Thus, what are other options for team building?

With the no active skill restriction, our teams will become reliant on our awakenings and leader skill to do well. Furthermore, teams that require 5+ of a specific orb colour (such as Yomi Dragon

) will be slightly disadvantaged due to orb fatigue (because no orb changers) and lower combo potential due to an awkward portion of your board being occupied by your 5 linked orbs.

awakenings will increase your consistency as each awakening grants 20% resistance.

Several leaders that come to mind include, but not limited to:

Rainbow leads have the advantage of a higher base multiplier compared to many other teams due to no actives. However, your consistency will be lower if you cannot match at least 6+ combos on average. 6 combos is the required number to in theory refresh your board with 1 of each element.

It is still possible to brute force your way through the dungeon with pure speed, but if you are trying to achieve the highest score possible, you will need to strike a balance between speed and combos.

I did some initial runs that both yielded top 10% results and should continue to go up as more and more players complete the dungeon. 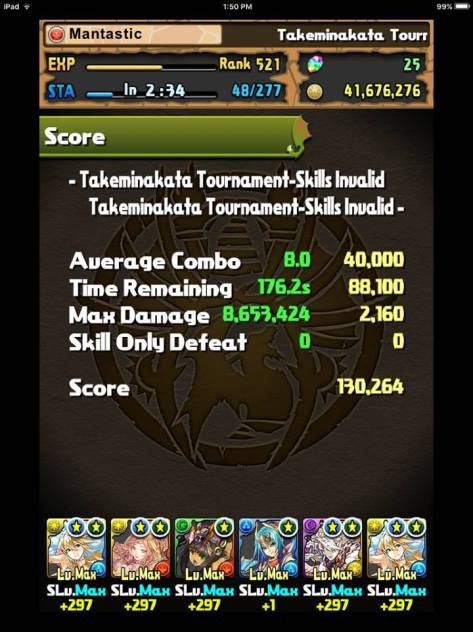 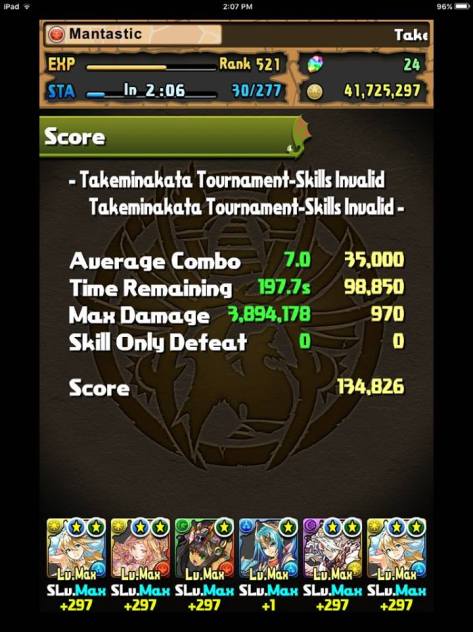 These score have room for improvement as I never managed to get off the 100x damage on my 134k score which lowered my max damage and average combos. With my Sakuya

team, I managed to strike a nice balance between time extends, 80% jammer resistance

awakening to ensure I could safely one shot the boss. Hatsume

is an amazing sub for this team because she provides 2

For Fantastic and their Awoken Shiva

team, I simply chose my highest damage subs (while prioritizing

as a means to manage the third floor who is a water attribute boss.

For players planning on taking rainbow style teams, you will need a certain amount of jammer resistance to provide more consistency and a few exceptional subs with 2+

Overall, this dungeon feels more “fair” as you are now rewarded for combos made. There is still an element of luck involved with skyfalls and orb troll, but at least the playing field feels more even. Furthermore, with only 5 floors, the chance of orb troll does go down and I hope you find a way to achieve a new high score for yourself.