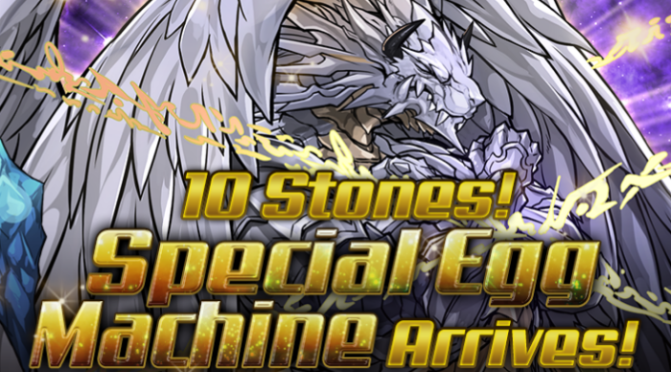 As part of the 4 year Puzzle and Dragons Anniversary event, GungHo is giving their North American and European servers the magical 10-stone Godfest Exclusive Rare Egg Machine. This machine was released to great fanfare in Japan some time ago as it guarantees a GFE on every single roll for double the magic stones. This means you will be acquiring 15,000 Monster Points from the troll Light Metatrons

instead of 3,000 from sad Silvers. Naturally, this presents the question: to roll or not to roll?

A sample video of an IAP-Friendly JP player:

The Rare Egg Machine (REM) is one of the more frustrating and exhilarating aspects of Puzzle and Dragons as it is essentially a form of gambling. To use the REM, you have to pay 5 Magic Stones and then you will be allowed to shake the golden dragon’s hand. After doing a little foreplay of either tummy rubbing or head patting, you will be awarded a special monster that can range in value/rarity from pointless to awe-inspiring. Sadly, what you get is completely random with the stronger rolls being far more elusive than the mundane.

How the 10-stone GFE REM varies

Various Godfests have had bolstered rates for GFE with 4x being the norm presently. However, even with what would appear to be strong GFE rates, you still have to deal with all the other clutter of silver eggs, troll golds, and pantheon cards. This dramatically dilutes your chances of rolling a GFE monster and you could have distressing Godfests as there is never a guarantee of what you could roll.

Thus, the 10-stone GFE REM is quite appealing to players who are either looking for large volumes of Monster Points or Godfest Exclusives.

Giving players a GFE for 10 Magic Stones almost sounds too good to be true and it is to a certain extent. Perhaps this is why GungHo only releases this type of REM on special occasions as it would be too “generous” otherwise. However, you have to keep in mind that you will not be swimming in 6-star GFEs as they still have lower rates compared to the ocean of 5-stars available. Furthermore, many of the 5-stars are dated and used for MP fodder.

The following images showcase the drop rates of the various GFE featured and can find more information through the following LINK on the 1,854 rolls. 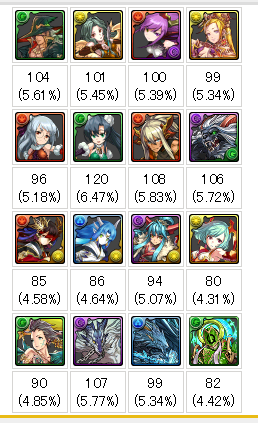 From the above data, the 6-star GFE had about a 15% roll rate (JP was also missing some of the newer GFE we currently have) which may seem distressing, but also raises the average MP per roll to around 20,000.

In order to make a fair comparison to the regular REM, we need to assume you are rolling it twice. The following math was compiled by ★【星空 凛】μ’s (Nigel):

The 10-stone GFE REM is 15% for a 6-star and JP had it split between 18 cards while we have 21. Specific is referring to rolling a particular 6* GFE as people may be chasing a single monster.

In essence, your chances of rolling a particular 6-star are about the same whether using a regular 4x Godfest or the 10-Stone machine. However, you also have to consider the 20,000 MP on average per roll (10 stones) or 10,000 per 5 stones from the 10-stone REM as this is significantly higher than regular Godfests. In addition, you are also free from the various other clutter regular Godfests come with.

The 10-stone GFE machine is an exciting event for North American players as it marks their first opportunity to easily acquire Godfest Exclusives. The rates when pursuing a particular 6-star GFE are on par when compared to a 4x GFE event, but you have much better collateral rolls alongside. In addition, the sheer amount of Monster Points you can gain from the 10-stone machine is quite Fantastic.

What do you hope to roll from the new 10-Stone GFE machine and how many stones do you have at the ready?

I will be rolling tomorrow and will upload my results when completed. You can also watch me pull live at 2pm PST on my Twitch Stream.