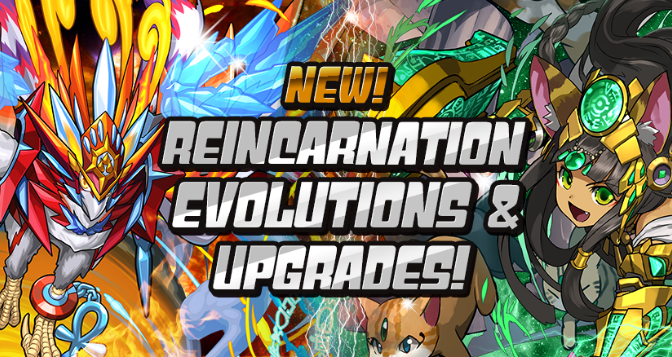 . However, many people are left with a feeling of disappointment as the wrong chicken received a new evolution. This review will quickly go over how the new Egyptian 1’s fit in today’s meta as they are in somewhat of an awkward place at the moment.

The Egyptian 1 pantheon have all received reincarnated evolutions with the exception of Isis. This pantheon is one of the oldest in Puzzle and Dragons and for a while contained some of the strongest leaders the game had to offer. They went through a wild roller coaster ride ups and down for a few years. Presently speaking, they are in somewhat slump for a period of time now. Their main problem was the dependency on using  an active skill to achieve their full multiplier which lowers their potency.

Active skill reliance places constraints on your clear potential as you have to either stall for actives or simply sacrifice a team slot for a quick charging ability. You are able to work around this in short dungeons or through coop in order to guarantee an active skill every turn but may struggle in dungeons with non-fixed spawns as it is harder to plan around.

Reincarnated Horus has always traded a higher damage multiplier for greater consistency. This worked well when he was first released as there were fewer options to choose from along with most of the content not requiring amazingly high multipliers. However, in today’s meta, it is just not worthwhile as we now have access to board refreshes and time extends. Thus, the safety net is no longer required and is actually hurting his potential overall.

A 100x rainbow leader is perhaps average nowadays. Unfortunately, being average is not really good enough as you ideally want to have a card who excels in one particular aspect. Furthermore, having a large percentage of your multiplier tied to the usage of an active skill truly kills Horus’s potential. Without an active skill, you will only be able to achieve 25x ATK along with 1x RCV. If his RCV component was passively built into his leader skill, he could at least stall. Sadly, if you want to heal, you must also use an active and run the risk of killing the floor as well.

With all that being said, Horus has some merits, most notably his potential to act as a sub on various teams. His base cooldown is only 4 turns and allows you to easily inherit something over top along with covering the awkward Fire and Water elements. Furthermore, he has dual Skill Bind Resistance which can greatly ease team building constraints in solo mode. Finally, his dual TPA and massive base attack will allow Horus to achieve amazing burst damage.

Reincarnated Bastet is a massive improvement to her Awoken form as it significantly boosts her maximum damage from her previous 36x. In addition, you have a higher combo threshold for additional damage (7->9) along with a stronger multiplier when using an active skill. This further cements Bastet as a glass cannon leader as she still has no defensive multiplier component.

Like Horus, Bastet can only offer up to 25x ATK without an active skill and will make it challenging to use her efficiently in content that requires a large amount of damage repeatedly. However, when using an active skill, you are able to deal lethal damage as you can efficiently stack TPA

awakenings. Granted you do lose out on your maximum damage multiplier, but if your team has enough TPA, the lower combo count can be justified. In fact, 7 combos (which is a realistic amount) will result in 100x ATK and that should be sufficient for most content as she is leading a mono wood team.

, Reincarnated Bastet wins out from a maximum multiplier point of view along without running the risk of flooding the board with wood and compromising combos. However, Acetet is superior from a combo perspective if no active skill is used. Acetet can achieve up to 64x ATK and gains her additional multiplier from matching 3 wood combos. This wood combo clause will usually result in an active skill being used, but will force you to bring more orb changers by comparison.

Reincarnated Bastet is better able to load up on utility-based actives as you do not require numerous wood orbs and can simply rely on the higher base multiplier and a TPA match. Another thing to consider is the risk of using God Killer

on Acetet which could lead to the inability to kill certain absorb bosses (most notably Sopdet). Finally, Reincarnated Bastet has a shorter cooldown along with higher weighted stats.

Reincarnated Anubis is a significant improvement to his Awoken form as you only require 11 combos for maximum damage along with active skill usage and 9 combo damage being improved. This somewhat lowers the risk involved along with providing some form of damage control as you can activate 9x damage with an active skill.

A 6×5 board can provide at most 10 combos with a perfect distribution. Unfortunately, the more likely scenario is a board with 7-8 combos and after matching perfectly, praying for adequate skyfalls is required. This playstyle is incredibly risky along with inconsistent as there will be many times where the skyfalls are not in your favour.

Reincarnated Anubis brings up to 30x ATK by himself and has some potential to pair with 7×6 leaders even if they have lower damage multipliers. Unfortunately, the best option currently is to use Aten

Shifting away from a leadership role, Reincarnated Anubis has strong potential on mono dark teams due to his bind immunity and recover bind

awakening. This enables Anubis to clear 3 turns of binds with a single row of hearts. This would be more helpful if he had a heart generating active, but you can always inherit something over top his own active.

Finally, looking at Anubis’s active skill, it has a reasonably long cooldown for the benefits it provides. Most single orb changer plus hazard removal is pinned at 7 turns along with a turn of haste. Thus, you are trading haste and an additional turn for the occasionally useful counterattack. Counterattack has most applications against resolve bosses that have a 1% attack you can survive. This will enable you to instantly kill the boss as their ability will hit you and then have the counterattack hit and kill them. Perhaps the best example of this is against Zeus & Hera as their damage goes out before the healing component.

have been buffed to provide 3 million off-colour experience instead of the original 2. Hooray.

The new Egyptian 1 evolutions are nice, but not necessarily game breaking. They do add another dimension to leadership potential, but many players are probably disappointed by no Ra Dragon

as he is one of the most anticipated evolutions to be released.

How do you feel about the new evolutions?