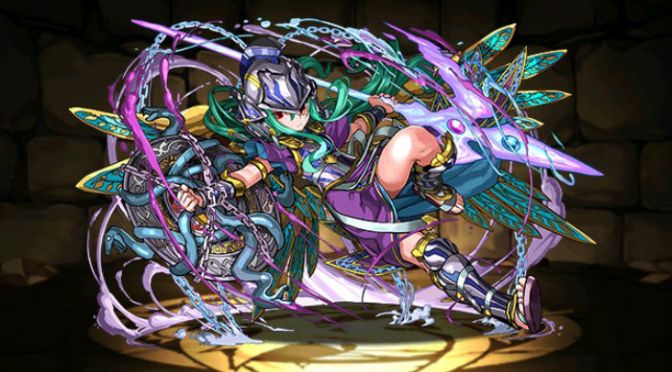 In the latest wave of PAD news coming out of JP, Dark Athena

will be available from the MP shop for 750,000 Monster Points. This raises numerous questions ranging from “why such a high cost?” to “is she really that strong?” along with “will North America actually get her?” In this article, I will do my best to examine how Dark Athena could change the landscape of Puzzle and Dragons along with possible justifications for her extreme cost compared to previous MP cards.

Dark Athena at a glance

Dark Athena may look lackluster from a purely multiplier perspective; however, she is actually one of the strongest cards/leaders in the game. There are many factors that go into consideration when trying to determine what makes a strong leader, and Dark Athena covers almost all of them.

Dark Athena has one of the most unconditional leader skills which dramatically raises her consistency and speed when playing through both challenging and easy content. Simply having to match a single water and dark combo for 49x is trivial compared to the shenanigans other leads require. This ease of activation enables you to flood the board with dark orbs in order to better take advantage of Dark Athena’s three TPA

In addition to the ease of access to damage, Dark Athena is also able to form a durable team through her 2.25x HP and 4x RCV when matching dark and water orbs. The constant health multiplier is important and will allow you to easily tank any preemptive and many execution hits in the game. While 4x RCV is amazing and will allow you to essentially heal to full HP, it does come with the restriction of matching a dark and water combo. This can be problematic as you will be triggering your 49x ATK multiplier. This means it may be challenging to actually stall on a floor as 49x is a respectable amount of damage and matching non-TPA can only do so much. Thankfully, with such a large HP pool, you should be able to withstand several consecutive hits without healing. Finally, you should also keep in mind Dark Athena is bind immune so you will always have access to these defensive multipliers.

In addition to all of these benefits, Dark Athena has amazing team building flexibility as she can use almost all of the top-tier dark subs provided they do not remove water orbs. Putting all of this together makes a stellar lead; however, I want to stress how fast Dark Athena can clear content. Being consistent is great, but being consistent and fast is amazing as you tend to repeatedly play the same dungeon over and over again.

Dark Athena can be favourably compared to Aizen

in that they are powerful tank-oriented teams with Dark Athena trading maximum damage potential for the badly needed health multiplier.

One last point to consider is that Dark Athena comes ready to use. She has no evolution requirement along with a gentler experience curve when compared to the other MP cards.

It is well established the Ra Dragon

reigns supreme as a top tier leader with Yomi

Dragon compromising powerful subs and future leader for Yomi in the future. These three cards all provide a unique benefit to your monster box and are somewhat irreplaceable for the roles they fulfill.

Conversely, the other MP cards (excluding seasonals) are largely luxuries or used to help your particular mono-colour subs have a home. Even with the anticipated release of the new evolutions for Shiva

, it does not necessarily solidify their place in the meta. Shiva Dragon has largely been replaced by coop button farming and Neptune becomes a more durable Krishna with a lower combo count. Granted Neptune Dragon can become a powerful coop farming lead, but if you own any Awoken Liu Bei pairings it is unnecessary.

Thus, we are left with the Four Gentlemen who are alright, but not really worth it for the time being. Xiang Mei

became outdated quite quickly due to heart cross meta. Plum

is mostly regulated to a luxury Gremory

sub and You Yu

gained some relevancy with Tifa

, but if you can form this team, you can most likely field a Myr

All of the above points may sound overtly critical, but I strongly believe that Monster Point cards should offer something above and beyond the norm. In an ideal world, you want to the purchase to dramatically push your progression potential by leaps and bounds.

Keeping all of the above points in mind, is Dark Athena really worth 750,000 Monster Points? She costs 2.5x more than a regular MP card and would need to provide an immense amount of value to justify this somewhat outrageous cost.

If we look at the top 3 MP cards, Ra, Yomi, and Ragnarok Dragon, they all provide tremendous value if you can actually utilize them. Ra Dragon requires a very specific team to succeed and is impractical for the average player to assemble. Yomi Dragon’s new evolution helps solidify their position as a stellar dark sub and a fast and easy to use 81x ATK / 4x RCV lead. However, she still suffers from a lack of HP and may rely largely on coop to be successful. Finally, Ragnarok Dragon has merits on many teams while retaining the potential to grow with a future evolution.

Taking all of that into consideration, not everyone can find value through those three cards as their monster box may be lacking in certain aspects. Thus, Dark Athena may be more appealing as she can be immediately used by any ranking player regardless of their content progression. In addition, she has a largely open sub pool as she can utilize nearly every strong card in the game.

In addition, Dark Athena is able to lead a powerful solo team that can clear Arena 3 with relatively high consistency. Thus, you will be immediately gaining an end game leader right from the get-go.

One last point to consider is that trying to build the ideal Ra Dragon team (with inherits etc.) will probably end up costing more magic stones compared to the difference in 450k MP. Very few players are able to form the perfect team and most never will. However, you can still enjoy the benefits of attempting end game content with Dark Athena as you can use nearly any dark card in the game.

Who can actually acquire 750k MP?

As much as everyone wants to have access to all the content in PAD, there will simply be aspects that will be out of reach for the average player. Many people complained that the One-Shot Challenges that featured a Radar Dragon at the end were outrageous and unfair, but in all honesty, it was meant to be end game content and not everyone can be end game. Constantly releasing easier/early game content will inevitably kill the game as many players will begin to stop playing after a certain point.

As such, Dark Athena will be meant for longer standing players who have been committed to Puzzle and Dragons for a prolonged period of time. Using two accounts as an example, I can clear any dungeon in the game along with being able to efficiently farm Monster Points. I purchased Yomi Dragon when she was first released (over a year ago) with just over 300,000 Monster Points. Since then, I have not made any additional purchases along with never spamming Rogue Descends for PreDRAs

There will also be many players in a similar boat as me, long term player with nothing of true value to purchase from the MP shop and have simply been stockpiling.

We gain 480 natural stamina every day along with the potential to rank up through playing, a dedicated player can farm up Monster Points in a relatively short period of time.

To make math simple, each Rogue Descend will drop 500 MP along with collateral Plus Eggs, Super Kings, or Evolution Materials. In addition, each one will give around 50-60k rank experience and will allow you to chain unlimited rank ups in coop up to around rank 550 without stopping. Higher ranks will have to slow down this progression and wait for stamina to refill, but you still will be able to achieve 1 rank up per day.

Now, I understand that not everyone wants to purely grind MP all day, but let us limit it to 10 clears per day as you probably wish to play other content (I am assuming you ranked up). This would yield 5,000 MP on a daily basis and would take 150 days or around 5 months to achieve.

You will naturally have access to various MP reward content (challenge dungeons, ranking tournaments, etc.) along with vendoring poor Godfest rolls to hasten the progress.

North America is usually on a 2-3 month delay in terms of content being released so you have plenty of time to prepare.

Players who have too much MP

Being able to IAP (purchase stones with real life money) to various degrees has allowed some players to acquire massive amounts of MP due to plentiful Godfest rolling. This has probably resulted in them nearing MP cap along with having nothing to actually purchase. This may feel like a Pay-to-Win idea, but Dark Athena was originally available in JP for around $30-40 retail.

Not everyone will be able to jump on the Dark Athena hype on release; however, you can still enjoy a modest success by leading with Awoken Persephone

and pairing with a Dark Athena friend. Awoken Persephone has the same activation requirements, but will always provide an RCV component. You do run the risk of bindability (fixed via solo badge), lower damage, and less HP, but this is a great budget option nevertheless.

Conclusion: To buy or not to buy?

The answer to this question comes down to your own personal PAD goals and resources available. Dark Athena will not necessarily clear more content than Myr

, but instead do so in a faster manner. Dark Athena is one of the fastest farming leaders in the game due to ease of activation along with being able to clear any dungeon currently available.

Dark Athena offers a different playstyle that helps add another level of dimension to Puzzle and Dragons along with utilizing different cards compared to other end game leaders. She grants more players the opportunity to tackle end game content while being accessible once you acquire 750k Monster Points.

I am confident North America will have access to Dark Athena in the future as she is not a Collab card and should not encounter any licensing issues.

For myself, I plan to purchase her on both Mantastic and Fantastic in order to open new doors for quickly clearing end game content.