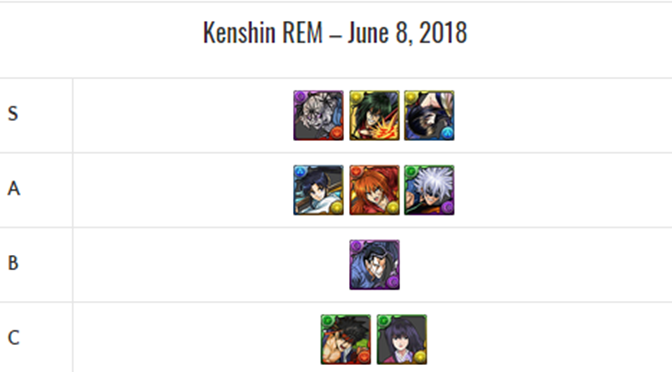 The Rurouni Kenshin REM makes a triumphant return after a prolonged absence from Puzzle and Dragons. With this inception, the REM gains 3 new cards along with the ability to Limit Break and grant Super Awakenings to the 6-star cards. Furthermore, players will have the option of using the Monster Exchange System to trade in for all of the 6* cards.

As a whole, the Rurouni Kenshin Collab is reasonable overall but may not be worth heavily rolling for the average player. This is not because the cards are weak, but the top prizes are more niche/geared towards players who are interested in farming more efficiently. In addition, there is hope/speculation that NA will gain Persona or Magic the Gather Collabs and they may have more potential overall.

This article will summarize each card’s strengths and weaknesses to give you a better idea of whether or not it is worth spending your Magic Stones here.

All 6-star cards are available for trade within the Monster Exchange System.

Regardless of card’s ranking, you should always keep it if it is your very first time acquiring them.

The 6* cards in the Kenshin Collab will have the ability to be Limit Broken along with receiving Super Awakenings. These additional awakenings can add significant power but only function in solo mode.

Any card that can qualify for Limit Breaking will having their level displayed in blue and feeding a Super Snow Globe will push them beyond the level 99 cap.

All 6* base cards can be acquired via the Monster Exchange System.

Leader Skill: ATK x3 for clearing each Dark orbs in a cross formation. All attribute cards ATK x2.5, RCV x2.5 on the turn a skill is used. ( Multiple skills will not stack )

Saito makes a lackluster return to the Kenshin Collab as he is not fulfilling any particular niche very well.

His original colour cross form is far too orb hungry for practical usage along with Dark lacking a 1-turn active card. Some may argue Cerberus

can be a 2-turn solution, but the lack of any secondary effect along with low weighted stats (unless used in coop) hold him back.

On the other hand, the Dark row/blob version has gained new relevancy as a farming leader through the introduction of the farmable Reincarnated Satan. Satan’s active can produce a full board of Dark orbs which enables massive damage potential; however, far cheaper options exist through Zeus Dios

Leader Skill: ATK  x3 for clearing each Fire or Light orbs in a cross formation. All attribute cards ATK x2.5, 25% all damage reduction when attacking with Fire and Light combos at the same time.

Kenshin is one of the original cards of the Rurouni Kenshin Collab and gains more value through his current buffs. For the most part, his original Fire/Light evolution is superior due to a much stronger Leader Skill which has only become more solidified through 7×6.

Generally speaking, Colour Cross leaders are “capped” for damage output on a normal board as it will only allow for 3 crosses and while it is often more than enough damage with 2, orb hungriness begins to set in.

This is further stressed by Kenshin’s need to match Fire and Light to trigger a damage reduction component which means one will be taking away from his cross potential if a shield is required.

Thankfully, 7×6 catapults Colour Cross leaders to new heights as the additional orbs allow for both more crosses to be formed as well as more consistent activation. Furthermore, Kenshin has wonderful 7×6 pairings that may not even require a leader swap depending on the dungeon.

is a Fantastic pairing as she offers both a wonderful active and syngergistic leader skill. Both leaders offer 25% damage reduction when matching Fire and Light combos which should almost always be doable on a 7×6 board. This pairing offers massive damage burst potential when hitting 4+ colour crosses and can offset the need to bring a Leader Swap active.

Overall, Kenshin is a powerful card, but is not as meta defining as Edward

Worth trading for via Monster Exchange? Maybe

Worth trading for via Monster Exchange? Maybe

. I say this because owning at least 1 Damage Absorb Void active is invaluable but greatly diminishes in value if one owns more.

Presently speaking, most leaders have the ability to dish out explosive damage which places them at the mercy of Absorption spawns such as Sopdet and Vishnu. As such, owning a Damage Absorb Void active can be invaluable when progressing through certain content. Of course it is possible to use a different team/set up and it is possible to clear all the content in the game by piggybacking off a friend, but not everyone wants to do this. My Mantastic account does not own one but is still able to clear all content but of course owning one would make some things easier.

As such, having access to your first Damage Absorb Void active can be invaluable as it gives you more flexibility moving forward and makes Hiko Seijuro a possible consideration for trading via the Monster Exchange System.

This potential trade can be valuable provided your box is lacking this type of active and thankfully it comes with a valuable secondary effect along with having viability as a sub as well.

significantly easier and is a beneficial secondary effect overall. Furthermore, Hiko Seijuro comes with a 20 turn cooldown which is only 1 more than Fujin (who uses 1 turn haste as the secondary effect) which makes Hiko’s active arguably more efficient.

Finally, one can use Hiko as a sub on their teams due to their beneficial awakenings that are only further enhanced via Super Awakenings. Just remember that Super Awakenings only work in solo mode which can place a damper on their usage if playing with other players.

Worth trading for via Monster Exchange?  No

At first glance, Enishi seems like a lackluster Wood farming card that falls behind other options but is actually amazingly powerful with the right set up.

This is because with three Enishi plus friend, one can form a row farming system with no skyfalls that can still combo or take advantage of skyfalls if needed. This enables Enishi to potentially swipe farm through significantly harder content as the only real stopping points are Resolves/Combo shields. With that being said, resolves can be countered via his own natural FUA2

awakening or the innate damage control that comes with no Skyfalls.

With that being said, this is a truly luxurious build that is naturally efficient but not truly needed for the average player.

Worth trading for via Monster Exchange?  Maybe

Shishio can be favourably compared against other farming leaders like Yamamoto

in that both can fully activate from a small number of orbs; however, Shishio is essentially better in every way.

Yamamoto suffers from a lack of utility awakenings that can place some constraints on team building/active skill usage. On the other hand, Shishio is fully bind immune, comes with a SBR, along with two Skill Boosts. These awakenings give him more flexibility in harder content along with enabling him to tackle some content like a traditional leader. Furthermore, Shishio can activate from either 5 Fire or 5 Dark orbs which opens up team building options.

Despite all of these wonderful aspects, Shishio may not be practical for the average player as their goals may not be purely focused on efficient farming. While this is a important aspect of PAD, it often requires coop play along with a somewhat “boring” playstyle after the team has been theory crafted. As such, the value Shishio  brings to a Monster Box is tied what your own goals are. One can use him as a traditional leader, but for the most part, stronger options exist.

Many of the 5 and 4-star cards are underwhelming and only the noteworthy ones will have a more detailed analysis.

Tomoe is the only new 5-star card from the Rurouni Kenshin Collab and comes with an incredible active skill along with situationally valuable awakenings.

Being able to reduce all incoming damage by 30% for 8 turns on only a 13 turn cooldown is simply ridiculous and can enable all teams to achieve survive lethal incoming damage. Presently speaking, unevolved Susano was the longest/highest value shielding option with 50% for 5 turns on a 15 turn cooldown so Tomoe is not too far fetched overall.

As such, the type of active you would like to inherit comes down to the type of dungeon being played through and how much shielding is required and for how long.

Outside of a shielding role, Tomoe can sometimes be used as a situational sub if one needs the shield to either come up faster or to take advantage of her defensive awakenings. With a natural 10% damage reduction to both Fire and Dark damage along with 60% resistance to Jammers, Tomoe can possibly be used in certain challenges. With that being said, being able to have a 8/13 up time on the shield is amazingly valuable for some teams as it grants them significantly more effective health.

Kaoru has an amazingly powerful active that fulfills two functions: orb generation and healing. While the orb generation aspect is quite straight forward, it has the additional benefit of adding combos to a mono-colour board.

For example, if one uses a Zeus Dios

active, they will have only a single combo barring skyfalls. As such, it makes it impossible to overcome combo shields but using Kaoru’s active produces 12 additional orbs to produce enough combos for most encounters.

With that being said, there are other dual row forming actives but Kaoru stands out due to the 50% heal component. This healing aspect can naturally help teams with poor recovery but has more applications on HP-conditional teams. Most notably, Zeus Verse

can greatly benefit from the 50% healing to stay in their activation zone.

Overall, Kaoru is an amazing Silver egg to roll and is arguably one of the best silvers available.

The Rurouni Kenshin Collab offers a wide variety of cards that will add depth to your Monster Box as several cards cannot be replicated otherwise. With that being said, most of these unique/powerful cards are geared towards end game players or those who want to min-max their experience. It is completely possible for the average player to ignore this Collab and not truly regret it as the prize cards may not be a strong fit for their Monster Box or goals.

Let me know what you think about the Rurouni Kenshin event in the comments below and if you plan on rolling.