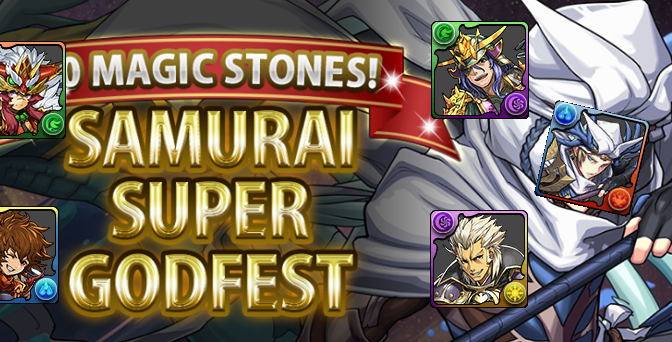 Continuing the trend of 10 Magic Stone Godfests is a special event that also acts as the debut for the Samurai Series 3. These new cards are the first 7-star pantheons to be released which will begin to pave the way for even rarer non-Godfest Exclusive (GFE) cards.

This may feel frustrating as a whole as new and powerful cards are being released while older pantheon cards sit idle in developed boxes. Regardless of how one may feel towards new high rarity cards, this is an impressive event overall due to the higher total rates for both GFE and the Samurai Series 3.

All cards in this Godfest will come out at 7-star, max level, max awoken, and +297. For the most part, these collateral benefits are largely wasteful as only new players gain meaningful value as all those perks are easily farmable. Despite the doubled Magic Stone cost, it is still a better event to roll in compared to regular Godfests.

This 1.5x bonus puts them on par with Ganesha

(1.8x) but having a modest ATK multiplier and Damage Reduction can greatly aid in Rank Farming/Leader Swapping. Furthermore, all Samurai Series 3 cards have 2-3 Skill Boosts

along with shorter Active Skills. Unfortunately, requiring 2 specific colours prevents mono-colour board swiping but being able to swap your desired leader in earlier while possibly having stronger base actives can be invaluable. While highly developed Monster Boxes may not find as much value for Rank Farming from the Samurai Series 3 (due to owning the ideal Saline set ups), most players can benefit from them as subs.

Each card from the Samurai Series 3 has different awakenings and actives which enables them to be used in various situations.

Just be aware that none of the Samurai Series 3 cards have Limit Break/Super Awakenings and have their weighted stats just above 1,000.

Takeda Shingen will primarily act as a HP buffing FUA

card but his main problem will be finding an ideal team to use him on. This is because mono-Fire is not too prevalent along with his active not having as much synergy at this point in time. Hestia

is somewhat similar in that she provides team utility, but her Enhanced Heal Orbs

teams as the additional +15% HP can help survive incoming attacks while also negating his small RCV.

On the other hand, if one is able to capitalize on the Verdandi

style board, the locking mechanic can help counter Spinner Orbs. Unfortunately, this also means one cannot use another active (unless it unlocks orbs) to fix a poorly distributed board.

Active: Inflict Water damage equal to ATK x200 to 1 enemy in exchange for reducing HP to 1. Affected by enemy element and defense. Ignores enemy damage absorb effects for 1 turn (15 turn CD)
Leader Skill: Get x1.5 experience after a battle. All attribute cards ATK x6, 25% all damage reduction when attacking with Water and Fire combos at the same time.
Awakenings:

Uesugi Kenshin is the strongest Water God Killer card available and gives players more options for dealing with these types of spawns. While 27x personal damage is impressive, he has less overall flexibility as he is only effective against a narrow range of spawns.

. This ensures one is able to use his active right away and can help trivialize problematic spawns in a timely manner. Unfortunately, there is a negative effect tied to his active to justify the lower cooldown: resetting HP to 1.

Having your HP reset to 1 can be either a blessing or curse depending on the type of team one is running so caution must be exercised for the next floor preemptive or if activation range is negated (eg. Edward

As a whole, Uesugi Kenshin is a specialized sub that can provide great value for a given team if his shortcomings can be worked around.

Active: Inflict Wood damage equal to ATK x100 to 1 enemy in exchange for reducing HP by 50%. Affected by enemy element and defense. +2 combo count for 1 turn. (8 turn CD)
Leader Skill: Get x1.5 experience after a battle. All attribute cards ATK x6, 25% all damage reduction when attacking with Wood and Dark combos at the same time.
Awakenings:

Date Masamune functions as a potent damaging card when below 50% HP as he will enjoy 8x personal damage. As such, he has synergy on low HP teams such as Raizer

with his active skill having ideal synergy.

Furthermore, his +2 Combo Count is the fastest charging one available as it also reduces your HP by 50%. Of course this should not be a problem for the above listed teams and the additional combos help ensure VDP

Just be aware the one has to be below 50% HP for Date Masamune to take effect for his own personal damage.

Toyotomi Hideyoshi is another triple 7 Combo

Light card but is able to fit on a wide variety of teams due to her high damage output. To help them stand out, they are able to use any Killer Latent to better customize their damage output for the team at hand. The main hurdle any damaging Light card faces is the existence of Ideal

From the board changer, Toyotomi is an ideal fit on Yusuke

teams and can counter spinner orbs due to the locking ability. This will enable Yusuke to easily combo amidst spinners. With that beind said, one must be aware that they cannot alter this locked board unless using an orb unlocker which counters the whole idea of locking the board.

Outside of Yusuke teams, Toyotomi can naturally be used on any combo-based team but one potential use would be on Dark Metatron

teams due to her God typing. Granted the board changer is not ideal, she can act as a damage stick for players who lack other options.

Active: No skyfall combos for 3 turns. Inflict Poison damage equal to ATK x50 to all enemies every turn. Ignore enemy element and defense. (3 turn CD)
Leader Skill: Get x1.5 experience after a battle. All attribute cards ATK x6, 25% all damage reduction when attacking with Dark and Light combos at the same time.
Awakenings:

Tokugawa Ieyasu is the final card in the Samurai Series 3 pantheon and comes with a unique and powerful kit.

He carries 3 Skill Boosts along with a fast 3-turn active skill. These help ensure other actives are charged in time while also allowing him to carry a valuable inherit with ease. Furthermore, he boasts 3 VDP

which translates into a massive 15.625x personal damage. This will easily obliterate any Void spawn as he is also able to take any Killer Latent.

Unfortunately, because all of his offensive awakenings are tied to VDP, he will have lackluster damage outside of these special matches.

One other interesting aspect to Tokugawa is that the No Skyfall component of his active skill can be looped permanently all by himself. This can act as an alternative to the No Skyfall badge but will mostly be used for either damage control or preventing a specific colour from matching.

The Samurai Super Godfest occurred in JP and did have a 38.25% chance to roll any GFE or Samurai Series 3 card. As such, this may be an ideal time to roll the Rare Egg Machine as the chances of acquiring something of value. Of course the featured line up will feature numerous Pantheon cards and a full line up can be found under the Skill Leveling Dungeon information HERE.

Generally speaking, players should be ideally rolling in Godfests where high value cards are featured at an increased rate. Furthermore, being able to acquire new GFE is ideal as they may help open up new doors for your Monster Box

With that being said, JP will be having their 7th year anniversary in 22 days but there will be a stream on January 30th which may release/tease new information that may alter our inclination to roll. As such, if you are truly GungHo on rolling in this Godfest, at least wait until the 30th to see if something significantly better comes out in JP.

This continuous chase of JP can be a frustrating aspect, but the gap for some events/content is narrowing and we can use this knowledge to make more informed decisions.

The Samurai Series 3 are a powerful new addition to the available Pantheons but being 7-star bases will be a foreshadowing for new cards having higher rarities and lower rolling rates.

As a whole, the Samurai Super Godfest is promising as it will feature a higher rate for GFE and the new 7-star pantheon but there is a JP stream on the 30th which may release/tease new information. As such, if you are inclined to roll in this Godfest, one should wait for the JP stream to make a more informed decision.

Let me know what you think about the Samurai Series 3 pantheon along with the Samurai Super Godfest in the comments below.