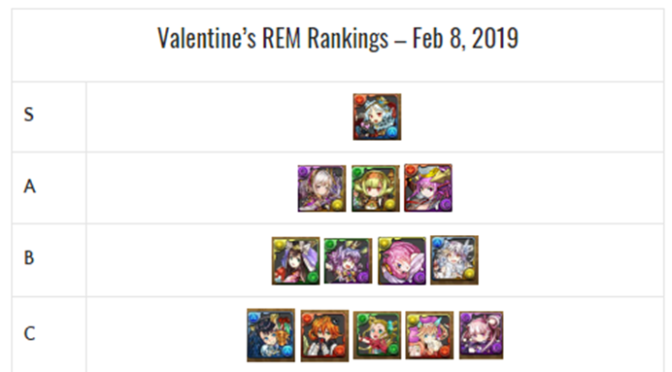 This Valentine’s Day, North American players will be enjoying the Valentine’s REM on time! This may be great to help you get into the spirit of love, but the event as a whole is quite unlovable.

This is because this egg machine is average overall with no outstanding prize card. This can be further compounded by poor rolling rates for the top tier cards with the only saving grace being the Gemstone Princess equivalents boasting a 7.5% roll rate.

For the most part, these Gemstone Princesses function like their REM equivalent and only lose value if one owns them already.

For the most part, this is a skip-able event unless one enjoys the artwork or strongly desires a Gemstone Princess.

Limit Breaking is the process of leveling a card beyond level 99. This will unlock more weighted stats along with the potential to receive Super Awakenings. These additional awakenings can add significant power but only function in solo mode.

Any card that can qualify for Limit Breaking will having their level displayed in blue and feeding a Super Snow Globe will push them beyond the level 99 cap.

You can read more about Super Awakenings HERE.

Weapon Assists are a special evolution for select cards that will be used exclusively as inherits. This form retains the same base stats as the original form but will also transfer over all awakenings on the Weapon Assist card and this occurs if the Awoken Assist

This type of evolution is permanent and cannot be reversed; however, during the card’s respective event, it is possible to Monster Exchange them to reverse them back to the original form. Doing this will forfeit all pluses, skill ups, and awakenings.

Valentine’s Ney has the potential to be an amazing card if we had a dedicated place to use her on. This is because her typing excludes her from most teams while also being a mediocre leader. As a result, it is challenging to find an ideal place to use her despite the fact that she is a powerful card.

She has strong weighted stats along with powerful awakenings that can greatly amplify her personal damage. Double TPA

when combined with two VDP

(via SA) enables her to be one of the stronger Void Damage Penetration cards available while still having reasonable output with vanilla combos.

In addition to her potent output, Valentine’s Ney also boasts a strong active as she is able to create a tri-elemental board with Hearts along with 5 turns of Bind and Awoken Bind clear. This double dipping ensures at least one component is useful and makes her a powerful inherit.

The main reason why I say inherit is because she does not fit as a sub on many teams despite all of the wonderful things she brings. For myself, I have been blessed with one Valentine’s Ney from a previous Super Godfest and have mostly found myself using her as an inherit on top of Eir

for my Dark Metatron

team. With that being said, she could potentially be used on Edward

as her weighted stats are now quite high.

As a whole, Valentine’s Ney is a powerful card who could become significantly more valuable if she can find a spot on a top tier team.

Valentine’s Sonia is one of two new cards released this year and comes with a unique active skill and potentially strong Leader Skill.

Valentine’s Sonia is able to produce a bicolour board that also includes 3 Heart orbs. This is interesting as it enables one to heal and deal large amounts of damage while also having VDP

. This may or may not always have practical applications but simply having additional options is valuable.

In terms of her Leader Skill, she is a mono-Fire team who wishes to connect 6 or more Fire orbs. This naturally leads to additional damage from Rows

but will unfortunately face inconsistencies as not all given boards will have the required orbs. This becomes problematic as her 75% Damage Reduction component is tied to this type of match. As a result, stalling may become problematic if one cannot naturally tank the incoming hit. Thankfully, if one can survive the attack, the 9x RCV will instantly heal you back up to full health.

In addition to all of this, Valentine’s Sonia can lead truly interesting system team by abusing Nidhogg’s Haste and Fire row generation. When undisturbed, this team can continuously generate a Fire row to deal massive damage and can potentially sweep challenging content quite quickly.

With that being said, Valentine’s Sonia can also function as a situational VDP sub due to her Killers. This can augment her personal damage while also having no combo clause for damage. Furthermore, she also comes with a FUA

which can help free up some team slots.

Valentine’s Astaroth has been greatly improved as a leader since last year and has become a reasonable leader overall. This is attributed to her massive 68.36% Damage Reduction which has 2 components while also being easy to activate.

The first component requires Wood and Light matches which is reasonably easy to do while the second requires any 5-connected orbs. The second clause is almost always able to be achieved as it can proc off any matched orbs. This high degree of consistency is important as being able to tap into at least 43.75% Damage Reduction (with damage control) can help in stalling out dangerous floors.

In terms of multipliers, Valentine’s Astaroth is on par for ATK with Madoo

but lacks the additional movement time and RCV while also requiring 2 specific colour matches. On the other hand, having a significantly larger shield is meaningful as it enables her team to survive more punishment. Unfortunately, one major drawback of Valentine’s Astaroth is her lower personal damage.

By relying on L

awakenings Valentine’s Astaroth may often have little damage output as 5 Wood orbs are not always available. This combined with a lowish ATK multiplier may present some issues as 1/3 of your team will be dealing less damage.

Valentine’s Kushinadahime looks strong on paper from a multiplier point of view but will rarely hit her full potential due to the No Skyfall clause.

In the past, No Skyfalls were a strong point for teams as it gave them a form of Damage Control. Sadly, with the abundance of Fujin

awakenings players can somewhat ignore those respective mechanics and diminishes the actual need for perfect damage control. These factors along with the need to pump out massive amounts of damage without actives is the main reason why Valentine’s Kushinadahime is nothing special.

A given board has 7-8 combos on average and with the No Skyfall clause, you are effectively capped at those respective multipliers. As such, you cannot get “lucky” and gain more combos along with not being able to deal higher amounts of damage without an active that adds combos.

defensive multiplier, Valentine’s Kushinadahime but with 7 Combos, Kushinadahime only deals 81x ATK and requires 9 (with no Skyfalls) to match Yusuke. Furthermore, Kushinadahime is restricted to God types whereas Yusuke can use any Light type card.

As a whole, Valentine’s Kushinadahime can be a reasonable leader with a high skill cap, but her own lack of damage and often lower damage output will make her less desirable compared to other modern day options.

Active: For 1 turn, reduce damage taken by 10% for each Two-Pronged Attack awakening skill on the team (10 turn cooldown)

Valentine’s Venus is a unique card in that she will provide players with an additional cosmetic orb skin along with a truly unique active.

Venus’s active skill works like a Gemstone Princess in that the efficacy scales up with the number of a specific awakenings on the team. In this case she relies on TPA

to provide a stacking 10% shield. As such, a team with 10 TPA would enjoy a 100% Damage Reduction on a very short 10 turn cooldown.

While this is great in theory, the challenging part is actually using a team that has enough TPA to justify using her compared to other shielding options. As such, Valentine’s Venus will mostly be a niche inherit overall as her sub potential average overall.

The Valentine’s Day REM offers three 6* cards which are the three best Gemstone Princesses. Gemstone Princesses are able to provide an ATK multiplier based on the number of a specific awakening on your team. Just bear in mind that it only counts that specific awakening along with their upgraded/super form. For example, Carat will count Skill Boosts

as 1 and Super Skill Boosts

The Gemstone Princesses are the most desirable option for universal burst damage because they provide their additional multiplier for 2 turns along with functioning on all teams. The two turns is valuable for longer content or when you are required to burst down two consecutive floors.

Their formula for damage calculation is 1 + (0.3n) where n = the number of that specific awakening. Thus on a team with 8 Time Extends

The Valentine’s Day forms provide the same active skill as their REM counterparts but have a different primary colour which can potentially open up more doors for stats being transferred over when inherited. For the most part all the Gemstones are used as inherits so their actual stats/awakenings are less important overall. Granted these forms have stronger awakenings, it is most likely not enough justification to run them over a more ideal sub.

The inclusion of Gemstone Princesses in the Valentine’s Day REM provides justification for rolling this event and features the highest rolling rates for these types of actives.

and is the most universally flexible Gemstone to own as every team will have numerous Skill Boosts. This flexibility enables her to be used on a wide variety of teams and has applications in coop when one side is heavily stacking Skill Boosts (although only that player’s team’s awakenings are counted).

In essence, Carat is used on nearly every farming and end game team as the burst of choice due to the high multiplier that does not require specific cards to achieve.

You can never own too many Carats as it will save you time and effort inheriting as well as helping you achieve 5-10 servings of fruits/vegetables per day.

which can be the most dominant awakening on certain teams, but is less universally powerful compared to Carat as most cards own multiple Skill Boosts and some leaders now feature built in movement time instead of awakenings.

awakenings which are less universally available as most cards tend to rely on other sources of personal damage. With that being said, certain team will find more value from Facet over other forms of burst damage.

The 5* base cards are all comprised of the Chinese Celestials in festive/cute outfits. Each one comes with their signature board changer (even Sakuya) along with enhancing their primary colour. While the exclusion of heart orbs hurts their overall value, they may be useful for newer players. This is because a newer account may be lacking enough depth in their Monster Box and being able to easily pick up a board changer is wonderful.

Unfortunately, more veteran players will find little merit for these cards outside of cuteness. On the bright side, all have Fantastic art and make wonderful Box Cheerleaders.

The Valentine’s Day REM is the best time to pick up a Gemstone at a reasonable rate. Unfortunately, this event lacks any game changing cards which makes it harder to justify rolling otherwise.

With that in mind, if you are lacking any Gemstone, it may be worth rolling as they do have respectable rates and will help round out your Monster Box as they are the best forms of burst damage with Carat being incredibly strong.

Let me know what you think about the Valentine’s Day event and how much you plan on rolling.