Sunday marks the debut of two new 7-star Godfest Exclusives who are both outstanding leaders that help push Powercreep to the next level. Unfortunately, they are debuting within a reasonably average Godfest as it only features 33% chance for any GFE which is as low as it can go. On the other hand, all five Samurai 3 cards (

) will be featured in their Weapon Assist form which helps bring the “good” rolling pool up to 40.5%.

As such, the value of this Super Godfest will be higher for those who lack Samurai 3 cards but will be more underwhelming for those who have already rolled them all.

With that being said, this article will examine both new Godfest Exclusives in greater detail.

. As a whole, this is a better design as it enables Royal Oak and Nautilus to have Skill Boosts

in their Base form (something a cyclic Transforming card cannot) along with no true worries about juggling a certain active skill for a specific floor. As such, it is best to try and reach the Final form as fast as possible but both have a 6 turn cooldown after they Transform for the first time. This means that without Haste, it will take a least 6 turns to Transform into their final and strongest form. 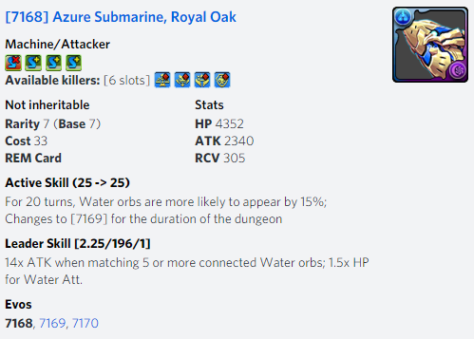 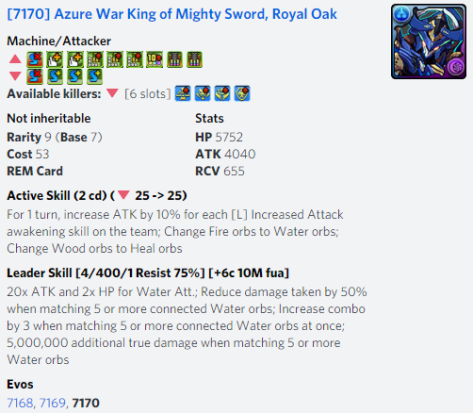 Royal Oak has a unique Transforming aspect as they have 3 different forms which require a 25 turn cooldown for the first active followed by a 6 turn cooldown to reach their Final form.

in their Base form which means only 19 more are required with dual leaders. As such, Transforming right away is feasible but this will result in a transitional form that requires 6 turns to Transform again. This is a significant hurdle as your Effective Health is conditional on 5 Water orbs which may not be possible without repeated orb changers. This can be offset by Hastes or Delays as loading up on Skill Boosts cannot fix this problem.

With that being said, once you are able to reach his final form, Royal Oak becomes a monstrously powerful card. Royal Oak boasts 16x Effective Health which enables him to survive essentially any attack in the game which in turn eases team building constraints as a Shield is no longer needed for AWoC2 (or really any other dungeon). Furthermore, their 2 turn cooldown forms a self-System with dual leaders which results in continuous Water and Heart orb generation along with a scaling ATK buff (1 + 0.1x where x = number L’s).

This helps offset any issues when it comes to orb generation as players should have at least 5 Water orbs on a given board after converting Fire to Water along with a much higher ATK multiplier. This helps ensure opposing spawns perish and the +6 combos from matching 5 or more Water helps Royal Oak tap into their 10 Combo

awakening. As a result, damage and activation should no longer become an issues once reaching their Final form.

But wait, the fun does not stop here a Royal Oak also features 10 million Auto Follow Up Damage which handles Resolve, high DEF/low HP spawns with ease and also overcomes the Dragon Seed in AWoC2 without a DEF Break or Hoppo

While all of this sounds amazing, Royal Oak is not without shortcomings as they are vulnerable after their First Transform (relatively speaking) along with L’s only truly benefiting the owning card unlike Rows who help the whole team. Another potential hurdle is the lack of an RCV multiplier which means reliance on an Enhanced Heart Orb

sub. Finally, all forms of Royal Oak are vulnerable to Binds but that can be easily corrected via a Bind Immune inherit.

do not help beyond the first Transform. Furthermore, Nautilus requires 6 Wood orbs for Damage Reduction which may be dicey during those vulnerable 6 turns. But once players are able to fully Transform Nautilus, he becomes an outrageously powerful leader.

Nautilus’s Final form boasts 4x HP and 75% Damage Reduction which translates into 16x Effective HP. This will enable him to survive essentially any attack in the game and will allow players to forgo Shielding actives in AWoC2 (or really any dungeon). To a certain extent, if you cannot die, there is a good chance you can eventually clear a given dungeon and their bulk is quite forgiving as even if you fail to match 6 Wood orbs, 4x HP is still significant.

In regards to their active, Nautilus features a 2 turn cooldown in their final form that generates Wood and Heart orbs along with a  scaling ATK buff (1 + 0.1x where x = number Wood Rows

). This helps ensure consistent activation but the bonus ATK can quickly add up as Rows are reasonably easy to find along with Zela Hats

. As such, with 1 Zela Hat anywhere on your team and no other source of Rows, Nautilus’s active will provide 2.2x ATK buff every turn which means their ATK multiplier can be adjusted to 1,267x for every card PLUS the damage from Rows and 7 Combos

if applicable. To top it off, Nautilus also provides +4 combos and 10 million Auto Follow Up damage. All of this translates into comically high damage output for the entire team and even the most durable encounters will melt away with relative ease.

While all of this is meaningful, players should be mindful of the 1x RCV which will require a Healing Solution which usually means Enhanced Heart Orbs

. The best option will be the future-buffed Alynna

who can also double as a Cleric. In addition to this, Nautilus is somewhat vulnerable during their first Transform as their 75% Damage Reduction requires 6 Wood orbs which may be difficult to acquire while juggling 2.25x HP. With that being said, these are relatively minor problems as Nautilus is incredibly over-tuned.

As a baseline value, Super Godfests will feature at least 33% chance for any GFE and as of late, two Samurai 3 cards (

). This usually pushes the valuable rolls to 36% and for this current Super Godfest, we will enjoy a 40.5% chance for a “good card.”

This pool will feature all five Samurai 3 cards at 1.5% each or 7.5% total which means the GFE rate is exactly 33% or as low as you can go. As such, the value of this Super Godfest will hinge on whether the GFE featured are meaningful along with how many Samurai 3 cards you own. Samurai 3 cards are some of the better Weapon Assists in the game and having at least one of each is meaningful.

The following rolling rates were posted by Onion via Tsukabi Bot: 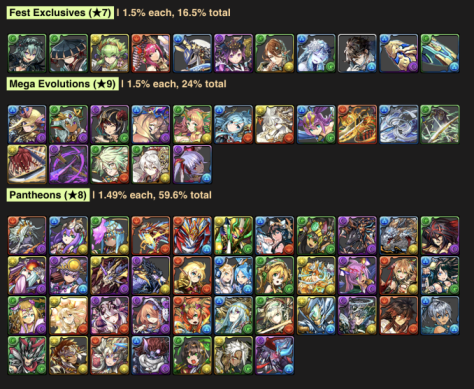 One other possible drawback of this Super Godfest is the fact that all of the Pantheon cards only come out in their Reincarnated form. This means it will take a significant amount of resources to bring them up to their SR or Weapon Assist evolution which may be an issue for newer players.

I own all of the Samurai 3 cards on both of my accounts which in turn lowers the possibly value for this event as even more dupes will not truly help my Monster Box.

As such, I will either roll sparingly or maybe not at all as I have no immediate need for either Royal Oak or Nautalus (both accounts have cleared AWoC2) along with future Godfests having better rolling rates for GFE.

Royal Oak and Nautilus are incredibly powerful leaders who provide an additional twist on Transforming as they require 2 steps to reach their Final form. Sadly, this Super Godfest features a 33% chance for any GFE but compensates with all five Samurai 3 Weapons.

This leads to either a valuable event if lacking the Samurai 3 cards or a relatively generic one if already owned and the decision of whether or not to roll will come down to your own Monster Box needs.

With that being said, let me know what you think about these two new cards in the comments down below along with your rolling plan for this event.