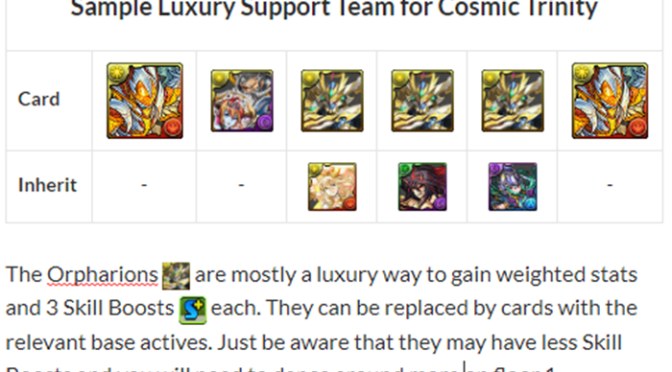 Cosmic Trinity offers the most challenging encounters that are currently available but are gatekeeped behind 3-Player Coop. Now I understand that not everyone likes the idea of trusting random strangers, but at least your own personal progression is less hindered by comparison to 2-Player mode.

With all that being said, new teams and leaders have emerged as more ideal/meta while cards that were previously at the top have begun to falter and decline.

This article will examine what makes a powerful team/leader for Cosmic Trinity, why Dark Athena and Ra Dragon are faltering as well as things you can do to improve your own chances of success barring perfect/ideal teams.

In addition, I will also be touching upon the idea of utilizing a support team if you are lacking top tier teams for Cosmic Trinity.

What is Cosmic Trinity?

Cosmic Trinity is one of the new 3P dungeons that falls under the Complete Annihilation difficulty.  It features various Descend bosses that gain increasingly higher stats up until the point where they can have 50+ million HP and deal essentially lethal amounts of damage to the average team. Furthermore, they appear in a random fashion which makes it challenging to actually plan accordingly. Finally, the final floor is guarded by a brand new encounter that is quite terrifying, but has various ways to cheese it.

Thus, half the challenge is actually being able to survive until the final boss while having the capacity to deal sufficient damage against spawns with 200-500 million health.

In all honesty, this is one of the most challenging dungeons released and the sheer damage requirements does exclude a fair number of teams from being successful. I am surprised that GungHo did not introduce any sort of unlocking requirement for this dungeon as a complete beginner could in theory jump right into a match and be completely overwhelmed. You cannot play Arena 3 right away so why should you be allowed to play a much harder dungeon as soon as you hit the stamina requirement?

Barring coordinated match making, players should ideally be running a more self sufficient leader that is able to activate off most given boards (not orb hungry), have sufficient damage output along with some form of defensive multipliers.

. All five are able to deal spectacular burst damage while having enough survivability to make it to the boss. Furthermore, they are able to activate off almost any given board which is key when trying to preserving active skills.

Despite Anubis being fantastic for Cosmic Trinity, it is beneficial to also run a more HP-heavy team alongside to help absorb challenging floors as they can survive larger hits without wasting a precious shield.

Why not Dark Athena or Ra Dragon?

Despite the fact that both Dark Athena

have defensive multiplier, their damage output is depressingly low by comparison.

Dark Athena is wonderfully suited for content like Arena 3 (one of my favourite solo farming teams) as her damage output is sufficient to easily breeze through all the floors leading up to the Radar Dragon. However, the 49x ATK is sadly not enough to deal meaningful damage to the later floors (even with 7c

). By comparison, Dark Metatron can use the same sub roster, but has a base 81x ATK instead. Furthermore, Dark Athena’s typing does not allow her to equip the ideal Killer latents which lowers her personal damage output.

In addition to lacking sufficient offensive firepower, Dark Athena’s RCV multiplier is tied to dealing damage which makes it challenging to stall as you require 3 types of orbs. However, the biggest drawback could be the lack of natural time extends.

When playing in solo mode, it is common practice to use the Time Extend badge as a sometimes needed crutch to consistently hit 7 combos. Unfortunately, 3-Player forbids the use of such badges and many players will often be struggling with 5.5 seconds of movement time.

By comparison, Ra Dragon also suffers from similar drawbacks but for somewhat different reasons. For starters, Ra Dragon is a rainbow team which does restrict what kind of cards you are allowed to bring. This makes it challenging to deviate from the “standard” team as you not only have have colour requirement fulfilled, but also having a few board changers available.

Ra Dragon needs all 6 elements to deal 144x and while this does sound impressive on paper, it is actually scattered and low damage overall. This is because you must dedicate 18 orbs to activation which leaves little room to stack your primary damaging element (which is also diluted due to rainbow team) that is further compounded by not being allowed to use orb changers. This will result in you somewhat praying you have enough TPA matches of your desired element (usually Light) while being at the mercy of a board changer.

While you can pump out reasonable damage to bosses around 8-9 million health, you will greatly struggle to make a meaningful dent in the later floors. Granted you are allowed to use burst inherits, but it will be challenging to stall long enough for them to come up. Furthermore, Ra Dragon also has a similar problem as Dark Athena when healing: you will be dealing modest damage each time. While you do not need to match specific colours to trigger 2.25x, you must match numerous combos and that will inevitably activate some/all of your multiplier. However, this is still a stronger defensive multiplier due to it being unconditional.

With all that being said, it is possible to utilize Killer latents/awakenings, but you will be building a very different Ra Dragon team. Cards such as Tsubaki

all possess the ideal Dragon/Devil Killers and will greatly help shorten the damage gap. However, you will have less than ideal base active skills so you must heavily utilize intelligent Skill Inheritance to compensate. Conversely, Ra Dragon is better suited to act as more of a support role due to the unconditional defensive multipliers.

What if Ra Dragon and Dark Athena are my best teams?

Since the REM is luck-based, you cannot control which cards you roll and with the ability to purchase a monster that caters to your box usually ends up as one of your stronger teams. As such, you may be in a situation in which Ra Dragon or Dark Athena are your best teams and after reading this, you may feel off-put by using them in Cosmic Trinity.

However, while they are not ideal, they are still viable teams, but you will have to either work harder or assume a more support-oriented role instead.

If you accept the fact that your damage is not going to be spectacular, you can shift your mindset to supporting your teammates.

This may be easier for Dark Athena teams as they already come with two built-in delays along with a higher RCV multiplier and at least retaining the ability to use orb changer to deal modest damage.

Support teams will vary, but their main goal is to provide additional benefits to your team by bringing utility-oriented actives. In most other multiplayer games, it is advantageous to have a support character and PAD is no exception.

The types of active skills you should be looking to bring include delays, shields, gravities, and burst actives. All of these will provide benefits to your teammates while also borrowing off the innate tankiness of 2.25x HP to tank large hits.

As such, your goal of a support team is to survive and provide the beneficial actives required for success.

For example, having Raphael

will completely counter the wood boss spawn as you instantly remove all the darkened orbs along with providing a 2 turn full immunity shield. Furthermore, if you bring Zeus and Hera

plus another gravity, you can instantly bypass any 50% resolve and thus countering the Water boss.

If you are able to bring all 3 of these actives, you will be invaluable in dealing with the two more common spawns.

Finally, Support teams can be performed by any leader who has innate tankiness so you may not need to use Ra Dragon or Dark Athena.

The cards you use will vary, but I personally like to try and run as many defensive actives as possible.

are mostly a luxury/optimal way to gain weighted stats, low base cooldown, and 3 Skill Boosts

. They can be replaced by cards with the relevant base actives. Just be aware that they may have less Skill Boosts and you will need to dance around more on floor 1.

The above team is able to provide >50% gravity, 3 damage reductions/voids, and a single delay along with having over 140,000 HP and massive base Recovery.

Once again, the exact team can vary from player to player, but the main idea is that you are able to provide utility that may not otherwise be available to your partners.

However, one point I want to stress is that using a support team runs the risk of having less than desirable teammates so it may be best to coordinate or play with people you know and can communicate with.

Cosmic Trinity is an amazingly challenging and unforgiving dungeon that requires a combination of high end teams, communication, and sometimes a bit of luck to succeed. While Ra Dragon and Dark Athena are powerful leaders, they tend to be less successful compared to the current top-tier options due to their lack of damage and somewhat inability to bring more utility.

However, this is not to say that they are poor leaders, just ill-suited for Cosmic Trinity. On the flip side, you can build yourself a support oriented team to help assist your teammates. This type of team can be effective when paired with skilled partners and your primary goal is to provide valuable utility and durability.