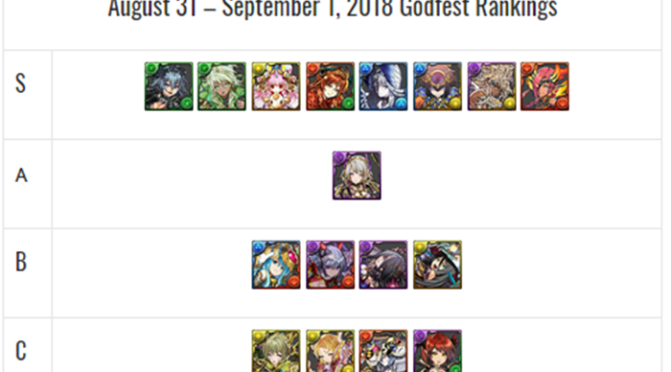 Friday marks the return of our bi-monthly Godfests and the upcoming one is average at best. This is because it does not feature exceptionally boosted rates along with only 17 featured 6/7* GFE. This appears to be the new norm for Godfests moving forward which is a step back from the 21-22 featured ones from a couple of months ago. In addition to my regular review, I will also be including my previous Madoo

commentary for those who missed it.

Another reason to avoid this Godfest is the potential for an upcoming 7-themed Super Godfest that was not tied to a specific date/anniversary. This means there is a strong likelihood NA will receive something similar in 2 months (no confirmation, just speculation). As such, it would be wise to skip this Godfest in favour of saving Stones for more promising events.

Looking at the past few Godfests, it appears that the trend is now to include two 7* and fifteen 6* GFE which is significantly lower compared to before. We used to have twenty 6* and one 7* which makes the overall rolling rates for hitting any 6/7* GFE lower.

have not been featured for the second time in a row.

This evolution path enables her to achieve 144x ATK / 4x RCV / 43.75% damage reduction when connecting any 5 orbs. This means any element can be blobbed (even if you do not have that element on your team) which means one can almost always activate on a given board. This is wonderful as she will be quite difficult to kill as she can always heal back up to full health and her effective health becomes quite high. The main drawback to her Leadership potential is her own personal damage may be lackluster unless one connects 4 Fire orbs.

While she has wonderful Leadership potential, her ability to function as a sub or inherit are significantly lower. If used as a sub, Madoo will almost only be used for her VDP

awakenings. While she does have viable personal damage, one must try to connect 4 Fire orbs together to ensure she is able to one shot durable spawns. If VDP is not required, Madoo will most likely be skipped for other options as she lacks 7/10c awakenings.

As an inherit, her active skill is lackluster due to the fact that adding +2 combos is modestly common, but the fact that it comes with a 2 turn delay means the overall cooldown is longer. It is rare that one will need both mechanics at the same time as it is presumed the boss will die right away. As such, if using it for a delay, the 14 turn cooldown is not justified compared to other options.

This list reflects a card’s overall usage/viability in the current meta as well as moving forward. Cards are in no particular order within each tier.

Use these rankings as a starting point and not as absolute truth. Highly valued cards only have merit if you have a team to support them so they are somewhat subjective to your own Monster Box.

Regardless of card’s ranking, you should almost always keep the first copy of anything you roll

Ameno has gained a brand new split evolution in JP that has revived their viability. Not only does she gain a significantly higher multiplier, but gaining a VDP improves clear times and consistency.

Dark Metatron gains her highly anticipated Mega Awoken Evolution that dramatically upgrades her in every way possible. Not only does she gain stellar awakenings, but her active skill now has perfect synergy with her incredible Leader Skill. Dark Metatron is able to grant 4x HP to Gods along with a 225x ATK multiplier AND a 43.75% damage reduction shield. This propels her effect HP to unprecedented levels (nearly 8x) and makes her able to tank virtually any execution in the game along with all preemptives with ease.

JP sites rank her as the highest tier leader in the game which may be partially attributed to the initial hype, but she is amazing overall.

You can view my First Impressions of both Ameno and Dark Metatron in the following video:
—

Blue Sonia is still a powerful and durable leader, but she is starting to lose ground compared to other options. Most notably is her limited sub pool and inability to run a Ragnarok

She can still waltz through Arena 3 and has the ability to damage control all absorption spawns, but the game is starting to shift towards leaders with either more flexibility/damage output along with being able to handle Alt Arena more easily.

but even with her new and improved form, she is no where near her previous power level. As such, Paimon tends to have less places to be used on and while he is an amazing HP stick, he provides less for most teams compared to other FUA

options along with Yog

having one naturally built in.

Baldin is still a wonderful Killer card who is able to have wonderfully high personal damage against a wide variety of spawns. Sadly, his base active skill is lackluster while also possessing a long cooldown. Furthermore, most teams are now shifting towards 7 Combo

subs as their damage is unconditional by comparison. With that being said, Baldin is still a powerful option for specialized content where his Killers can be fully taken advantage of.

Raijin, Kanna, Dantalion, and Gremory are all being demoted due to the lack of viable places they can be used on. For the most part, their active skills are underwhelming and they lack the ideal awakenings to justify their usage as a sub. As such, it is only fitting that they be demoted to better help differentiate their value compared to the other Godfest Exclusives.

Overall, this Godfest does feature a strong, albeit limited line up. Only a few of the top prize cards are absent, but this does not change the fact that there are only 17 cards featured. Furthermore, each featured cards has a lower chance of being rolled compared to a Super Godfest so one is losing out on two fronts as Super Godfests feature all Godfest Exclusives.

As mentioned above, there is strong speculation that NA will be blessed with a 7-themed Super Godfest in 2 months time (no confirmation, just speculation) which would be an ideal time to spend your Magic Stones.

Due to the power of rare Collab cards, having extra copies of 6-star Godfest Exclusives has become vital to progressing through the game. Sadly, gunning purely for 6* GFE is best done during the Super Godfests where the chances of rolling a 6* GFE are significantly higher.

Regardless, the Trading Post/Monster Exchange System makes it highly undesirable to actually sell any 6* GFE as they can instead be traded in for a desirable/rare card.

With the presence of a Godfest, only 6/7* GFE are Highlighted. As a result, the 6* Pantheon cards now lose their Highlighted rates and drop down to around 0.64% chance which makes them on par with 6* GFE.

This creates an interesting conundrum, during non-Godfest events, the chances of you rolling a 6* Pantheon card are significantly higher but you cannot acquire the GFE.

With this in mind, it is still best to roll in Godfest events as the 6* GFE tend to be stronger overall and you can at least still roll a 6* Pantheon card at the same time.

Rolling rates may change each Godfest so always double check the line up beforehand.

Due to the fact that the Assist Carnival is ending tonight (right before Godfest) and next cycled Pantheon begins on Sunday (right after Godfest), I do not know who/what will be featured alongside the Godfest. As such, check the official rolling rates in game for confirmation.

Prior to the REM Renewal, it was quite risky to roll in Collabs as they often left players more disappointed than anything else. However, after seeing various Collab rolling rates, one has a pretty solid chance at acquiring a 7*+ card. Of course you will have to weigh the pros and cons along with examining the lowest rarity rolls from the Collab.

On the bright side, we are now able to utilize the Monster Exchange System to trade in for a desirable card. This was most prominent for acquiring Yusuke

as players did not actually have to roll in it and could simply exchange four 6* GFE/YYH Collab cards.

Sadly, Collabs are starting to shift towards the strongest cards in the game which is unfortunate for newer players as there is simply not enough Magic Stones to go around.

As a result, it has become more valuable for veteran player to roll in Collabs due to the fact that it offers cards you cannot otherwise replicate. On the other hand, newer players will tend to find more merit in regular Godfests as they need to round out their Monster Box before chasing more niche cards.

Thankfully, all players are able to use the Monster Exchange System to trade in for a rare Collab card of their choice.

The upcoming Godfest has a strong but small roster of featured Godfest Exclusives. While it may be tempting to roll, I would exercise caution in doing so as only 17 GFE are featured. In addition, there is the strong possibility that we will have a 7’s themed Super Godfest in 2 months time which would be a much better place to spend your Magic Stones.

Let me know what you think about this event in the comments below along with how much you plan on rolling.