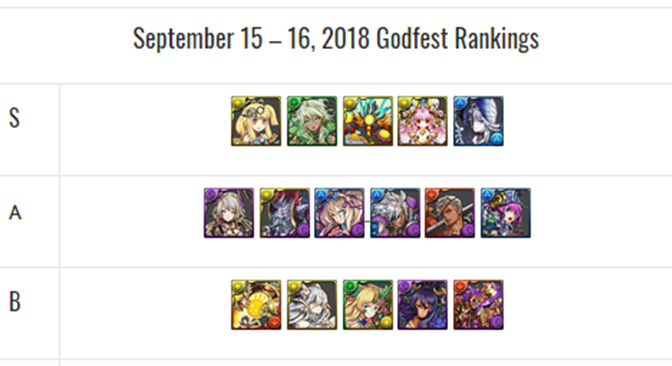 . Saline is a brand new 7* Godfest Exclusive and will be a top prize card for many players as she is able to boost rank experience gained by 1.8x. While this may look strange on paper, it is invaluable for higher ranking players or those who wish to chain rank ups more easily.

Unfortunately, Saline will be arriaving in a lackluster Godfest that only features 17 GFE. This has become the norm and makes current Godfests significantly worse compared to a few months ago simply because the number of featured GFE is smaller. As such, it may be best to skip this Godfest and wait for an event where GFE are better featured.

Furthermore, JP just had a massive Dragonbound & Dragon Caller (DBDC) renewal that introduced new cards and significant buffs to existing cards. For the most part, DBDC is one of the best special REMs to roll in as it features the strongest line up of lowest rarity cards and is only rivaled by Monster Hunter. This event should be coming to NA in about 2 months time along with heavy speculation of a 7-star Super Godfest beforehand.

This article will summerize the featured line up along with providing a review of Saline.

Looking at the past few Godfests, it appears that the trend is now to include two 7* and fifteen 6* GFE which is significantly lower compared to before. We used to have twenty 6* and one 7* which makes the overall rolling rates for hitting any 6/7* GFE lower.

have not been featured for the second time in a row.

Saline is a interesting card as both of her evolution forms have viability depending on your individual needs; however, the bonus EXP version

will most likely be the default choice in many scenarios. This is because Saline greatly outclasses Ganesha

as she provides 1.8x instead of 1.5x. While this may seem small on paper, the actual amount of EXP gained can quickly add up.

Saline’s base form provides 1.8x rank experience upon completing a dungeon assuming players enter with her as a leader. While this may seem mediocre at first glance, it becomes invaluable for higher ranking players who require millions of experience to rank up.

While the player ranking system in PAD is underwhelming for the most part, each successful Rank Up does fully restore stamina along with providing +1 to maximum stamina every other rank. Thus, many lower to mid ranking players have the potential to chain Rank Ups and effectively never need to restore stamina via Magic Stones.

Thus, by having a card that can augment experience gained, one can better choose when to rank up or chain them as needed.

Before Saline, players had to rely on Ganesha to bolster Rank Experience by 1.5x per leader which is still viable, but using Saline will often be preferred.

As one can see, the bonus Experience quickly ramps up when Salines are used and this can drastically reduce the number of runs to rank up. 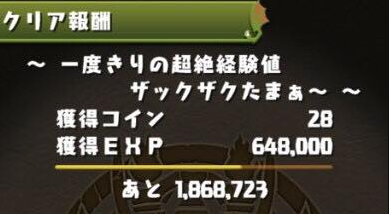 On the other hand, using your Ganesha with a friend’s Saline will provide 540,000 EXP.

Another beneficial aspect to using Saline over Ganesha is the 2x ATK provided. While this only results in 4x ATK, it may help those who lack leader swapping actives like Macha

. With that being said, players who wish to tap into Saline’s true potential will require rarer inherits/subs in order to leader swap and clear content in the most time efficient manner possible.

One final note to keep in mind is that blindly running for Rank Experience can actually be detrimental to lower ranking players. This is because they could potentially chain rank ups already and by prematuraly Ranking Up, they may be wasting large amounts of Stamina. As such, approach Rank farming with caution as to better avoid wasting precious Stamina.

changes her Leader Skill and awakenings and transforms her into a specialized sub. In this form, Saline’s Leader Skill is far too orb hungry to be viable along with lacking any defensive multipliers but her high damage potential makes her an efficient sub.

Presently speaking, players have a reasonably large access to VDP

cards and the key to using them successfully is having high effective damage against specific spawns as the VDP card is often tasked with dealing the full amount of damage as other cards are voided out. Thus, Saline can be a viable choice provided 2/5 Killers take effect. For example, against a God and Dragon spawn, Saline will have 9x effective damage from her Killers which can be further amplified via Killer Latents. Of course, the main drawback of using Saline in this manner is one is passing up on the bonus EXP form along with having to deal with a 19 turn cooldown that does not provide a VDP board. With that being said, players can use Saline board changer and then a single or double row maker to hit 4 or 7 combos with the 3×3 box.

This list reflects a card’s overall usage/viability in the current meta as well as moving forward. Cards are in no particular order within each tier.

Use these rankings as a starting point and not as absolute truth. Highly valued cards only have merit if you have a team to support them so they are somewhat subjective to your own Monster Box.

Regardless of card’s ranking, you should almost always keep the first copy of anything you roll

Overall, this Godfest is average overall but the poor rolling rates on 17 GFE should be motivation enough to not roll. While there may be great temptation to try and acquire Saline, it would be hard to justify rolling in pursuit of her.

As mentioned above, there is strong speculation that NA will be blessed with a 7-themed Super Godfest in 1-2 months time (no confirmation, just speculation) which would be an ideal time to spend your Magic Stones along with the renewed DBDC in 2-3 months.

Due to the power of rare Collab cards, having extra copies of 6-star Godfest Exclusives has become vital to progressing through the game. Sadly, gunning purely for 6* GFE is best done during the Super Godfests where the chances of rolling a 6* GFE are significantly higher.

Regardless, the Trading Post/Monster Exchange System makes it highly undesirable to actually sell any 6* GFE as they can instead be traded in for a desirable/rare card.

With the presence of a Godfest, only 6/7* GFE are Highlighted. As a result, the 6* Pantheon cards now lose their Highlighted rates and drop down to around 0.64% chance which makes them on par with 6* GFE.

This creates an interesting conundrum, during non-Godfest events, the chances of you rolling a 6* Pantheon card are significantly higher but you cannot acquire the GFE.

With this in mind, it is still best to roll in Godfest events as the 6* GFE tend to be stronger overall and you can at least still roll a 6* Pantheon card at the same time.

Rolling rates may change each Godfest so always double check the line up beforehand.

Sadly, the Three Kingdoms pantheon has been largely outdated for quite some time as stronger options have been released despite the arrival of their new evolutions.

On the other hand, Red Sonia

may be gaining some traction due to NA receiving more Ranking Dungeons as her bi-colour board changer sits on a 12 turn cooldown with no secondary animation. Otherwise, the rest of the 5* GFE are situational but Zuoh and Metatron Weapon Assists may prove useful.

Prior to the REM Renewal, it was quite risky to roll in Collabs as they often left players more disappointed than anything else. However, after seeing various Collab rolling rates, one has a pretty solid chance at acquiring a 7*+ card. Of course you will have to weigh the pros and cons along with examining the lowest rarity rolls from the Collab.

On the bright side, we are now able to utilize the Monster Exchange System to trade in for a desirable card. This was most prominent for acquiring Yusuke

as players did not actually have to roll in it and could simply exchange four 6* GFE/YYH Collab cards.

Sadly, Collabs are starting to shift towards the strongest cards in the game which is unfortunate for newer players as there is simply not enough Magic Stones to go around.

As a result, it has become more valuable for veteran player to roll in Collabs due to the fact that it offers cards you cannot otherwise replicate. On the other hand, newer players will tend to find more merit in regular Godfests as they need to round out their Monster Box before chasing more niche cards.

Thankfully, all players are able to use the Monster Exchange System to trade in for a rare Collab card of their choice.

The upcoming Godfest has an average line up overall while also introducing Saline. It can be frustrating that GungHo has effectively nerfed Godfests by only including 17 GFE instead of the previous 20-21 which has forced many players to simply hoard stones for a more lucrative event.

Let me know what you think about this event in the comments below along with how much you plan on rolling.