As part of Apple’s new policy, companies must now disclose rolling/summoning rates for their Monetized Loot Boxes. As such, GungHo has complied and recently revamped the REM right before releasing the new rolling rates (more can be reading and my thoughts on the REM Renewal can be found HERE).

The rolling rates disclosed only apply to the Renewed REM or other machines that require Magic Stones while PAL Points and Rank 50 Rolls will not be revealed.

With the rates being officially revealed in North America today, we can now make an informed decision as to whether we should roll or not.

Despite taking a quick glance at what looks like depressingly low odds, this change is actually positive overall.

Puzzle and Dragons is a Gatcha-style game that utilizes a Progression-oriented Loot Box monetization system. This means that your level of progression throughout the game can be strongly correlated with your rolling luck or IAP levels. Granted PAD has a major skill component, it can still be challenging to continue to move forward if you fail to roll the newer/Powercreeped cards.

This figurative barrier can lead to frustration and it is challenging for developers to balance the free trickle of Premium Currency (Magic Stones for PAD), rolling rates, and profit margins.

With the reveal of rolling rates, developers must find a way to keep players motivated to spend/play. In the case of Puzzle and Dragons, it came in the form of the REM Renewal and cleaning up what was a horribly cluttered pool.

I feel that other games may follow suit in revamping their REM-equivalent structure to showcase more favourable odds overall which should be a boon for the gaming community as a whole. Conversely, games may go in the direction of lessening the Loot Box format but that is a completely different can of worms beyond the scope of this article.

The REM Renewal did a serious overall of the Rare Egg Machine as it removed countless silver cards along with condensing the pool of available monsters at any given time. This is a double pronged sword (TPA maybe?) that provides two distinct benefits for players: less trash to roll and a smaller pool to draw from.

For the most part, almost all of the silver eggs that were removed were garbage/trolls/sold for 3,000 MP and by having them taken out permanently, the worst roll possible has now been improved. This is not to say that there are no horrible cards left in the REM, it is just that there are less at this point in time. With this in mind, I would not be surprised to see current weak cards filtered out overtime as new content is released.

However, we will currently have no way of obtaining the glorious Chrono Turtle or other meme-worthy silvers unless they begin to show up as rewards from gift dungeons such as the Late Bloomers. JP has PAD Radar to acquire these but NA/EU will have no option to do so at this point in time.

Puzzle and Dragons is one of the oldest gatcha-style games on the market and their financial success has enabled them to release content at an impressive rate. However, it can almost be overwhelming when trying to keep abreast with current meta trends as things can shift quickly as new cards are released on a regular basis. This has led to REM bloat as there are hundreds of different cards you could roll.

As a result, it is has become difficult to acquire newly released cards as you now have to continuously roll from a larger and larger pool of monsters. Thus, with the REM Renewal, GungHo will be cycling the featured cards from their massive pool of monsters and creating an atmosphere where you are more likely to roll a specific card.

Just bear in mind that the featured cards in the REM will cycle so it may take some time for your desired cards to rotate back in.

Starting today, players will now see an improved interface for viewing the possible cards that can be rolled from any Egg Machine. While the PEM will only display the possible cards you can roll, the REM will now have individual rates attached to each featured card.

The following rates shown are for a non-Godfest event. Numbers for all of the displayed cards should be lower when 6* GFE are added into the pool.

The following images can be found under Machine -> Lineup.

I am pleasantly surprised to see that highlighted 6* cards have a solid 1.4% roll rate and are the most common card in the entire line up. They received slightly more than 2x increase compared to the other 6* cards featured below. On the other hand, the former 5* GFE also received 2x increase, but they still have a distressingly low roll rate. In fact, former 5* GFE have the lowest hit rate of any type of featured card. 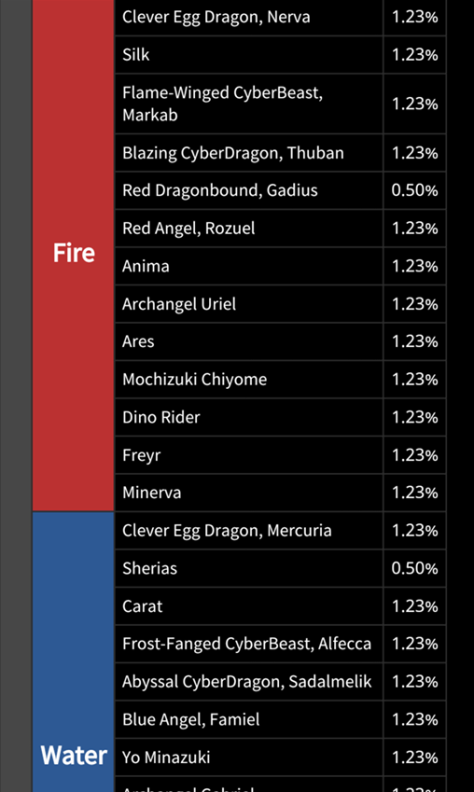 However, the big stand outs are the Wise Dragons

. These two series provide the best burst actives in the game and were quite challenging to roll in the previous REM. Furthermore, they have an equal chance of being rolled compared to the junk 5* monsters.

Sadly, the former 5* GFE have the lowest roll rates in the entire REM and that leads me to wonder how low a 6* GFE will be during a Godfest event.

Based on the above rolling information, I feel that there are some significant winners and losers through the REM Renewal. This is based on a non-Godfest event (but I assume everyone will be reduced accordingly to make space for 6* GFE).

The Wise Dragons and Gemstone Princesses are the biggest winners to be found in the REM Renewal. Both these series were elusive for the average player due to either their age or availability in the REM. This had led to a shortage for the average player and could greatly impede their ability to progress. Thus, by having the two most powerful burst actives more readily available (same chance as regular 5* cards), players will hopefully be able to pick some up with greater ease.

now have the lowest rates in the entire REM barring depressing rates for 6* GFE. Their 0.5% (1% with Highlight) means you will be quite unlikely to actually roll these cards which may or may not be a blessing.

For the most part, there was perhaps over saturation of 5* GFE for long term players as they were always available each Godfest and appeared to have reasonably high rates. Thus, rolling your 8th Light Metatron

was not an uncommon occurrence and was mostly sold for 15,000 MP.

Barring amazing/horrible rates from 6* GFE during Godfests, the REM Renewal is an overall positive change to come to Puzzle and Dragons. Being forced to disclose rolling rates will help prevent abysmal odds on top prizes and hopefully make chase cards/key monsters more accessible overall. Furthermore, by condensing the pool of available monsters, you are much more likely to snipe your target card and avoid the bloat of monsters from the previous REM. Finally, the Wise Dragons and Gemstone Princesses should now be more available compared to before as they now share the same rates as other 5* cards.

Let me know what you think about the changes overall and how will you approach the REM moving forward.