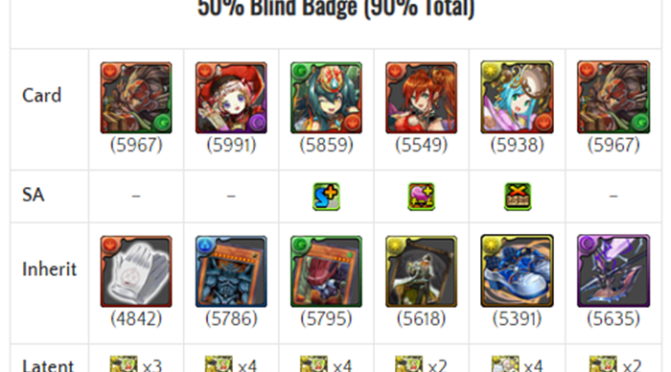 Alt. Arena 3 remains one of the best dungeons to farm on a regular basis due to the Rank EXP, Pys, Killers, and the satisfaction of clearing a challenging dungeon.

Despite being in the game for a modest period of time, AA3 can still be unforgiving to an unprepared player as failing to bring a key Resist or flubbing a kill board could result in an unfortunate ending.

With this in mind, I wish to share my double Grigory

team as he tries to revive the TPA

meta through his massive multipliers, immunity to Poison damage, and Auto Follow Up Attack.

Despite having many things going in his favour, I found my Grigory team had several issues compared to other higher tier leaders and I believe the issue lies in the fact that I am running double Grigory.

This is because the two strongest mechanics for Leader Skills are 7×6 and Auto Follow Up Attack which will result in asymmetrical pairings. As such, my 6×5 Grigory team had issues with Combo shields along with some problems with damage due to a lack of offensive sub options.

With these points in mind, I wish to explore how I built my own team along with addressing the major hurdles that can be found in Alt. Arena 3.

Alt. Arena 3 is currently one of the hardest dungeon available in North America and may push many teams to their limits. As such, it is important to understand the key mechanics that must be addressed.

The following is a brief summary of the notable mechanics in the dungeon. This may not be an exhaustive list for every team but is the checklist I use when team building for this dungeon.

Being able to address each of these options will ensure a much higher clear rate overall.

Grigory alone boasts truly wonderful multipliers along with having an incredibly easy activation clause as a single combo of Wood and Fire should be doable from most given boards and just these two combos will trigger his full ATK multiplier and Auto Follow Up Damage while also being immune to Poison damage. These are the same multipliers and benefits as Yugi

which should be indicator of his potential.

Furthermore, Grigory is his own source of primary damage for his team due to his 7 TPA

awakenings. This can result in spectacular damage from a single 4-match and your two leaders are often enough from a damage output view. This will be the case for the vast majority of floors but for myself, I struggled against the final bosses as I only had 2-3/6 cards dealing meaningful damage.

With that being said, double Grigory suffers from a lack of awakening diversity as each leader has 7/9 of their awakenings dedicated to offense. This will inevitably lead to a lower amount of orb movement time along with a symmetrical pairing lacking access to 7×6.

While using 7×6 is not mandatory, it is tremendously helpful as it provides up to 4 more natural combos along with a lower chance of orb troll.

Another potential speed bump Grigory teams face is a potential inability to deal with Void spawns if Grigory’s active is not ready. Grigory’s active allows players to Void Damage Void but will take 10 turns to charge up post-Transform which can make early Void spawns tedious. While it is possible to have VDP

subs on your team, it may be difficult to slot them in when balancing the need for 18 Skill Boosts

The following is the Grigory x Grigory team I was able to make from my Monster Box. It is able to address all of the above mechanics while having sufficient health to survive any preemptive at full HP:

My dual Grigory team is able to full Resist everything except for Blinds which is currently at 90%. I felt that this small 10% sacrifice was worthwhile as it allows me to cover every other metric while also allowing my friend’s Grigory to have Zaerog Core’s Weapon

Assist which provides an additional 2 TPA. This translates into just over 2x more damage compared to my Grigory and helps ensure I can sweep the more tanky floors.

As with any Transforming/typing specific team, it is perfectly okay to run one-off type card assuming they provide enough utility and Polowne

does that perfectly. This is because she provides 4 Effective Skill Boosts

along with a 8-turn cooldown Damage and Colour Absorb Void. I decided to use Kaiba’s Weapon Assist

who is able to provide 2 turns of Delay along with the ability to generate 6 Hearts while not removing Wood or Fire orbs. This will have a 10 + 4 = 14 turn cooldown which means it can be used on Floor 1 which in turn makes Ruel have 6 Effective Skill Boosts. While I am well aware that Grigory has immunity to Poison damage, the Super Poison Resist

on Ruel effectively functions as a “Jammer” Resist as Poison orbs will still take up space on the board. In an ideal world, my Ruel would be Duval

, a sizable HP stat, a tricolour board changer, and Thighs. While Grigory is my primary damage dealer, having one card with 7 Combos is valuable in the case where only 3 Fire orbs are present as I will still have one card dealing 8x personal damage. The Shelling Ford inherit

provides a Skill Boost along with 40% Jammer Resist

and a single Blind Resist

My final sub is Amaterasu

who is vital to my success as she solves all of my healing needs. This is because Grigory teams are comprised of Physical cards who tend to have their stats heavily skewed towards HP and ATK while leaving often neglecting their RCV. As such, having 4x RCV on cards who are close to 0 is futile. Thankfully, Amaterasu boasts absurdly high RCV, can utilize RCV+ latents, and has 3 Enhanced Heal Orb

which is futher boosted by the farmable Dorothy Shoes

who provide another Enhanced Heal orb along with additional RCV.

As such, Amaterasu provides all the healing you will ever need while also providing 3 Effective Skill Boosts and a 4 turn Bind/Awoken Bind clear. In fact, her healing potential is so great that you can easily ignore the 75% RCV debuff. Barring Amaterasu, Lakshmi

is a viable alternative but is inferior due to a lower healing potential, a wasteful base active, and one less Effective Skill Boost.

Dual Grigory teams boast spectacular multipliers while also being immune to Poison Damage and providing Auto Follow Up Attack with a single Fire and Wood match. Furthermore, all of your healing needs are solved by Amaterasu and the main struggle I had was a lack of damage towards the final floors.

but I was still able to Grind down bosses due to my huge HP and healing potential.

Let me know what you think about Grigory x Grigory along with the teams you have built with these two leaders in the comments down below.

On a side note, I am getting closer to my ultimate goal of 400/400 Best Friends but still have space for a few more! If you still have your Token available, leave me your ID and in game name and I will send a request your way =)