Super Godfests are 10-Stone events where players will have at least a 1/3 or 33% chance of acquiring any Godfest Exclusive (GFE) but this changes when it becomes a Seasonal Super Godfest.

Seasonal Super Godfests are unique as they feature 7-9 star Seasonal cards in the line up but omit all the horrible bottom rarity cards that are found in their respective REMs. This is important as rolling in Seasonal REMs tends to be an underwhelming affair whereas the “bad” rolls in a Godfest are at least Pantheon cards who will have value for more shallow Boxes or are actually potent in their own right.

Furthermore, Seasonal Super Godfests also include 6 and 7-star Godfest Exclusives but will have their rates adjusted due to the inclusion of the Seasonal cards. With this in mind, I tend to lump all of the valuable cards (Seasonal, GFE, Samurai 3) into the “good” to roll pool which comes to 37% chance for the current Seasonal Super Godfest.

While this is potentially lower compared to PCGF/anniversary events, neither of these allow players to directly roll the higher rarity Seasonal cards who are often acquired via Monster Exchanging. This in turn means that rolling any of these cards can be thought of as acquiring 4-5 GFEs as you just saved yourself the Monster Exchange.

Seasonal Super Godfests differ from regular Super Godfests as they push out varying amounts of GFEs in order to accommodate the Seasonal cards. This adjusted rolling pool will still have a >33% chance to acquire any “good” card (Seasonal, GFE, Samurai 3). As such, the featured Seasonal cards will be the main motivator to roll in this event as many of them are incredibly difficult to replicate otherwise.

The following rolling rates were posted by Onion via Tsukabi Bot: 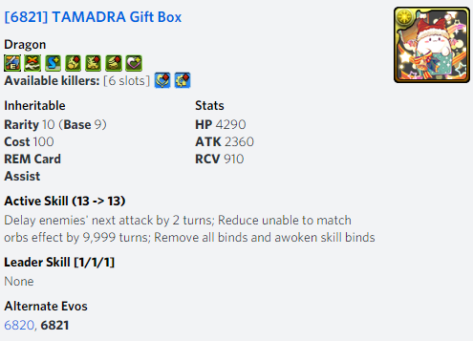 Christmas Tamadra’s Base form is a powerful Cleric solution for a variety of teams but their Weapon Assist is arguably one of the best in the game. This is because it does not have any colour-specific awakenings and the Full Bind Immunity

will seldom go to waste.

Furthermore, the 2 turn Delay can be used to either add Effective Skill Boosts or as a fantastic solution for the Ogres in WoC2. The Red Ogre in WoC2 feature a guaranteed 600,000 attack on their first turn and cannot be killed instantly due to Super Resolve. As such, the Delay can enable players to circumnavigate this large hit while also fully clearing the Binds.

I Monster Exchanged for Christmas Tamadra during the last event and it has been one of my best investments as it is used on essentially every WoC2 team I have.

Christmas Gremory is the best Cleric solution for mono Fire teams as she offers a fantastic active along with naturally high HP which can help hit key health thresholds.

Furthermore, all of her awakenings are valuable as she brings 4 Skill Boosts

. While FUA is often not a pursued awakening due to it being relatively common/Auto Follow Up leads, it has merits on Seina

teams if you are not running Polowne

which is the norm for WoC2.

For myself, I Monster Exchanged for Christmas Gremory and she has been a truly amazing investment and rolling her here is essentially like rolling four 6-star GFEs.

Halloween Bastet’s main appeal will be her 3 turn active that is able to provide 2x Movement Time and RCV for a single turn. This will overwrite either of these Debuffs and the low cooldown ensures it will always be ready at key moments. Furthermore, the 3 turn cooldown means she is able to inherit a higher-impact active with relative ease. Finally, her Guard Break

may have situational value against high DEF spawns.

For myself, I have often found it challenging to incorporate both these mechanics on my mono Dark teams and acquiring her will be a significant boon to my Monster Box.

along with a wonderful active skill that provides a single turn of Damage and Colour Absorb Void on an 8-turn cooldown.

This type of active is essentially mandatory in every current dungeon as at least one of those mechanics will appear. Sadly, Christmas Polowne is restricted to mono Wood teams whereas her original form

can be used more easily due to the Team HP

Seasonal Super Godfests are exciting events as they enable players to directly roll valuable cards from otherwise lackluster REMs. This is because the “bad” rolls are Pantheon cards who often eclipse the bottom rarity Seasonal cards along with higher rolling rates overall.

As such, if any of the featured Seasonal cards seems appealing to you, this will be a meaningful place to spend your Magic Stones as you can acquire both Trade Fodder (GFE) or directly roll the Seasonal chase card which in turn saves Trade Fodder.

For myself, I have acquired the majority of my Seasonal cards through previous Seasonal Super Godfests which helps me save up Trade Fodder for other events.

Let me know what you think about this Seasonal Super Godfest in the comments below and whether or not you plan on rolling.