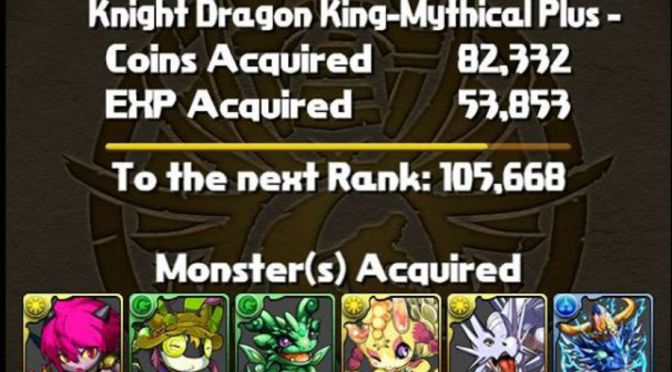 spawn on floor 8. Thankfully, coop allows you to bring 8 subs to better combat the harder mechanics in Mythic Plus.

teams. When team building, I decided to load up Mantastic with more offensive / damage heavy subs and delegate Fantastic to utility / defensive abilities. This can have some advantages as you can coordinate your turns to have your offensive team face the more dangerous bosses while allowing the defensive team to absorb either the binds or handle the PreDra floor. Binds in multiplayer do not affect your partner’s team as only the leader is shared. Furthermore, any team used in Mythical Plus has to delegate one sub to countering the 3 PreDRAs who have 10 million defence, 50 HP, and hit for 24,000 every turn. As such, this sub is most likely “dead weight” for the remaining floors.

Nordis’s dungeon is favourable for dark teams as the majority of the floors are light and consequently you can deal double damage. Do note that the final floor does a 3 turn pre-emptive bind to all dark monsters; however, my leaders

are bind immune and has the bind recover

awakening. As mentioned above, binds that affect subs do not hinder your partner as they only play with their subs. Therefore I could plan my entrance into the boss floor and not be worried about binds.

My logic for Mantastic was to use Claire

‘s heart to dark orb change in conjunction with

can enhance all the newly spawned dark orbs along with utilizing

and shielding option of Dark Izanami

who has 6 million health and starts in the green element.

However, even the best laid plans can go awry and need to think quickly on your figurative feet to adapt. I miss judged my damage output on the 6th floor and that jumbled up my turn order (due to dealing too little damage with Fantastic partially because of low monster levels) and I had to pass my turn in order to safely bypass the PreDRA floor on the eighth floor.

I also encountered another issue of the incorrect player making their turn during Nordis in his first form on floor 10. I was forced to sweep with Mantastic which threw out my plans for having Fantastic bound and subsequent active stack one-shot. Therefore I used

‘s shield to mitigate the incoming damage and killed once my binds were cleared.

teams before attempting others. However, farming Nordis

on Mythic Plus is great to do as it offers massive rank experience, 500 Monster Points, and eventually a max skilled

Let me know your experience with coop and what teams you ran to clear the Mythic Plus content.