Today marks the debut a special Super Godfest that features all 9 Great Witches that have been released thus far along with a discounted Magic Stone cost. This leads to an interesting situation as each roll will only cost 8 Magic Stones along with the featured roster containing many useful and powerful Godfest Exclusives along with the entire Samurai 3 Pantheon.

evolutions in JP which should becoming to North America now/soon. These Weapon Assists are unique and powerful as they are able to provide 80% Resistance against a certain mechanic (

) along with a single Skill Boost

With this in mind, the Samurai 3 Pantheon is highly desirable and I will add their 7.5% total chance into the “good” stuff to roll category for this Super Godfest.

playing a vital role in this process. This makes sense as you have 2 leaders, 4 subs, and 6 inherits/Weapons along with a potentially long checklist of mechanics to cover/counter.

As such, gaining access to Weapon Assists that provide a single Skill Boost

along with 80% Resistance to either Jammer

mechanics can greatly alleviate team building restrictions as you are able to address two different but important aspects of team building.

Generally speaking, the Skill Boosts have the most value on Transforming teams which tend to be the dominant cards at this point in time as their Skill Boost requirements are offset by a stronger card post-Transform.

The following are the new Weapon Assists for the Samurai 3 cards: 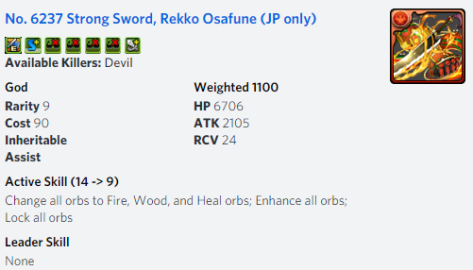 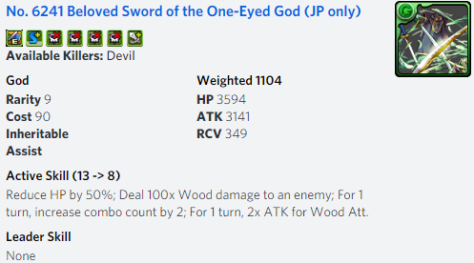 Despite the fact that the Samurai 3 Pantheon will also have Reincarnated forms in the near future, their Weapon Assists are far more unique/valuable for the majority of players as they cannot be replicated by any other card. As such, when these evolutions do go live, it would often be best to pursue their Weapon Assist form.

*Note, Ney comes in one of her 5 Evolved forms but the total chance of rolling any Ney is 1.5%.

To roll or not to roll

Generally speaking, Super Godfests cost 10 Magic Stones and feature at worst, 1/3 chance for any Godfest Exclusive. While the chances for any Pantheon card is higher compared to these “normal” rates, I have decided to keep the Samurai 3 cards separate as they are actually something you would be happy to roll. If this shift is made, the chances for any other Pantheon drop down to 61.65% which surpasses the baseline for Super Godfests along with us having a 2 Magic Stone discount on each roll. This discount means that 80 stones will equal 10 instead of 8 rolls.

Furthermore, there is a healthy number of 7* GFE that can be rolled along with the four newer Witches being available who are capable of leading teams for end game content. On top of this, Blue Odin

are both featured who are arguably the best 6-star GFE available.

I am well aware that there are always future events coming out in JP along with the fact that they are around 2 months ahead. As such, new stuff will constantly be teased/featured and we can potentially get stuck in a continuous loop of saving and never rolling because the “next big thing” is on the horizon. In our case, it will be the release of the new 7* GFE, Remu

who is able to beautifully pair with Dante

. With that being said, they do have modestly restrictive team building requirements which may make it impractical for all players along with this Super Godfest being quite strong overall.

As such, you will have to bite the metaphorical bullet and roll at some point and this 8 Stone event is solid overall assuming you desire the Samurai 3 Weapon Assists. With this in mind, I plan to stream some rolls this afternoon as I would love to acquire the Samurai 3 Weapons along with trying to actually roll some 7* GFE for either future Trade Fodder or current use.

and 80% protection against Blind

Overall, the rolling rates for something of value is on par with normal Super Godfests but the 2 Magic Stone discount helps push this event to another level.

With that being said, let me know what you think about this event in the comments below and whether or not you plan on rolling. If you did roll, let me know how it went.