Today marks the debut of another 10 Magic Stone Super Godfest which features a healthy roster of desirable 7-star Godfest Exclusives. Like the past few Super Godfests, this event will feature a 33% GFE rate while also including 2 Samurai 3 Pantheon cards to bring the total of “desirable” rolls to 36%.

This has become the norm for Super Godfests as most feature at least a 1/3 chance for GFE and it now becomes a matter of lining up as many desirable cards as possible in a single event.

As such, the value of any Super Godfest will hinge on how much you value the featured GFE as it will return on a regular basis.

*Note, Cotton comes in one of her 5 Evolved forms but the total chance of rolling any Cotton is 1.5%.

To roll or not to roll

Generally speaking, Super Godfests cost 10 Magic Stones and feature at worst, 1/3 chance for any Godfest Exclusive. As such, it is most advantageous to try and line up as many key cards for your Monster Box as possible before shaking the REM’s hand.

In the case of this Super Godfest, it features the same rolling odds as a standard Super Godfest while also including a modest array of the newer 7-star GFEs which in turn may make it more appealing. Cards such as Menoa

, along with Shelling Ford

for their Weapons are all currently powerful cards to own. With that being said, this can still be seen as a relatively generic Super Godfest as there are no Seasonal cards featured nor exceptionally high rates for GFE.

As such, the decision of whether or not to roll will come down to your own individual Monster Box and goals. Building upon that, it is important to determine whether or not you are rolling to advance your position or the concept of Need over Greed.

What I mean by this is determining whether or not rolling here will actually help you clear more content compared to what you can right now. For example, if you are currently stuck on Arena 5, you need to determine what is holding you back: is it a lack of experience and active skill management or is it because you are using a team with many holes in it?

If you are failing due to issues stemming from your own orb matching skills or active skill management, rolling may not actually help, especially if you have a solid team already. On the flip side, if you have hit a metaphorical wall and are currently being held back by the depth of your Monster Box, rolling can be advantageous assuming the featured cards can help you.

If you would like further reading on this Need over Greed topic, feel free to check out my Though Process for Rolling or Monster Exchanging article HERE.

The current Super Godfest features a 64% Pantheon rolling rate along with a healthy spread of newer 7-star GFE or those that have significant value. While this does sound appealing, one must remember that this is a relatively standard Super Godfest due to no Sasonals nor stronger rolling rates.

As such, the decision of whether or not to roll will come down to your own Monster Box and goals for PAD. With that being said, it is never a “bad” thing to roll in Super Godfests as they always feature 1/3 chance to acquire a GFE which are either tremendously powerful or used as Trade Fodder.

With that being said, let me know what you think about this event in the comments below and whether or not you plan on rolling. If you did roll, let me know how it went. 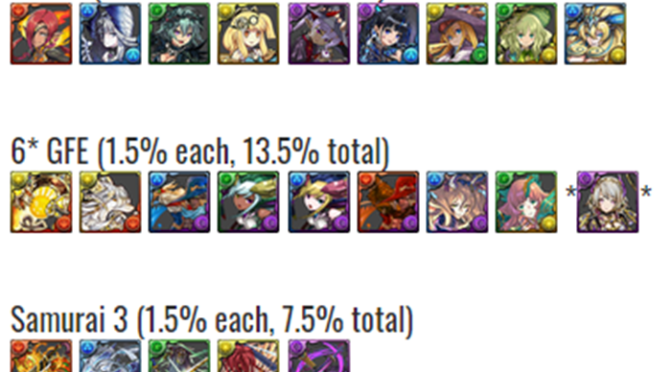 Today marks the debut a special Super Godfest that features all 9 Great Witches that have been released thus far along with a discounted Magic Stone cost. This leads to an interesting situation as each roll will only cost 8 Magic Stones along with the featured roster containing many useful and powerful Godfest Exclusives along with the entire Samurai 3 Pantheon.

evolutions in JP which should becoming to North America now/soon. These Weapon Assists are unique and powerful as they are able to provide 80% Resistance against a certain mechanic (

) along with a single Skill Boost

With this in mind, the Samurai 3 Pantheon is highly desirable and I will add their 7.5% total chance into the “good” stuff to roll category for this Super Godfest.

playing a vital role in this process. This makes sense as you have 2 leaders, 4 subs, and 6 inherits/Weapons along with a potentially long checklist of mechanics to cover/counter. END_OF_DOCUMENT_TOKEN_TO_BE_REPLACED 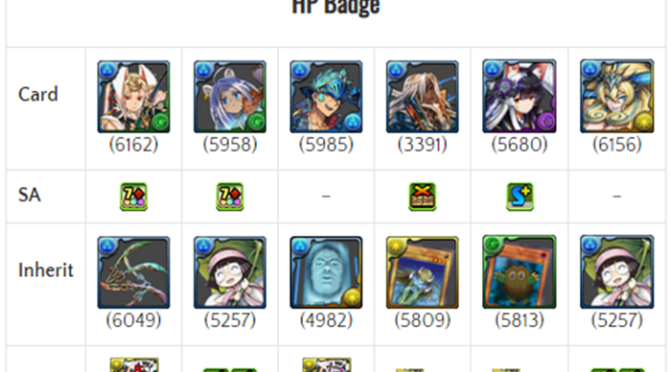 With the release of both GH Tsukuyomi

, North American players have the opportunity to utilize a truly spectacular team that is able to tackle any dungeon in the game. With this in mind, I have developed a team for my own Monster Box to farm Alt. Arena 4 while using a Yuri

as a sub as I was unable to roll my own Norza.

Furthermore, I Monster Exchanged for Tsukuyomi as I am able to build a viable team for end game content. As with any trade, this should not be done on a whim and only completed if you can actually support it.

Taking these points into consideration, I want to share my thought process behind building my own team and how I approach Alt. Arena 4. This article will include a full breakdown of each of my card’s inherits, latents, and rationale for them being chosen along with a detailed description of the hurdles in Alt. Arena 4.

Alt. Arena 4 is currently the hardest dungeon available in North America and will push many teams to their limits. As such, it is important to understand the key mechanics that must be addressed.

END_OF_DOCUMENT_TOKEN_TO_BE_REPLACED

The current Super Godfest that has gone live today features the standard 33% GFE rolling rates along with the release of two new 7-star Godfest Exclusives: Norza

Both of these cards are tremendously powerful as they Transform and are new. This may sound a little silly but new cards tend to be stronger compared to older ones and they are often at their peak power upon release.

This is due to how future buffs have the chance to be underwhelming and in order to generate hype/excitement, a newly released card has to be strong.

With this in mind, I wish to take a look at both of these cards in more detail to determine why they are so powerful and to give players a better understanding of they can expect if they do roll in this Super Godfest. 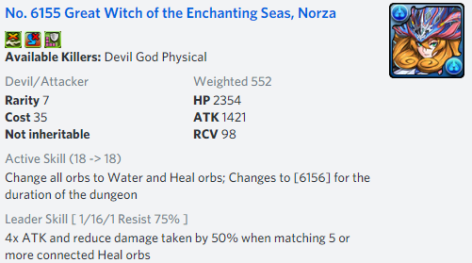