Super Godfests are special 10-Stone events where players will have at least a 1/3 or 33% chance of acquiring any Godfest Exclusive. For the sake of value, I will always lump in the Samurai 3 series into the pool of “good” (aka GFE) pool as their Weapon Assists are some of the best.

As such, the current Super Godfest running from January 31 – February 2 is entirely average and is nearly 10% lower chances for acquiring a GFE or Samurai 3 card compared to the recent Player’s Choice Godfest.

With this in mind, I would be most inclined to skip this event as it is nothing special and we will have essentially a similar event featuring a tiny bit above 1/3 GFE rates on a regular basis.

On a different note, I miss the days of when GHNA named their Super Godfests.

A Super Godfest will always feature at least 1/3 chance for any Godfest Exclusive for 10 Magic Stones per roll and this should be used as a baseline to determine the value of a given event.

Thus, the current Super Godfest falls into this baseline category and is nothing special in the grand scheme of things. As such, I would exercise self control and not roll in this event as another one just like it will return with a few weeks time.

The following rolling rates were posted by Onion via Tsukabi Bot which also saves my wrists from excessive copy-pasting: 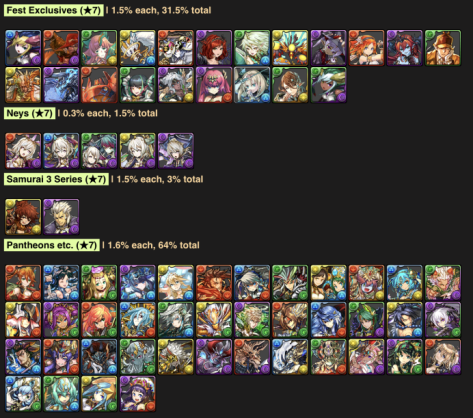 As mentioned in the introduction, I always like to lump in the Samurai 3 cards into the “good” pool which grants us a 36% chance of any top prize which is barely above the 1/3 baseline. This in turn make this a lackluster Super Godfest and there should be no true reason to be rolling here and saving your Magic Stones for the next high value event is better.

Higher value events are any Super Godfests that feature better rolling rates (eg. the recent Player’s Choice Godfest) or various Collabs/events that are limited time who also feature powerful cards. It is impossible to predict what may come but rest assured that there will be plenty more Super Godfests in the future so skipping this one should not be an issue.

For myself, my main approach to catching up on Powercreep is to continuously hoard Magic Stones and then roll heavy during a high value event. This will allow me to catch up with less resources spent along with having more chances of rolling the key featured cards in that event.

Saving Stones for a higher value event and rolling hard will help you acquire the current meta cards and assuming that event had better rolling rates, you will spend less Magic Stones overall.

Let me know what you think about this Super Godfest in the comments below and whether or not you plan on rolling.