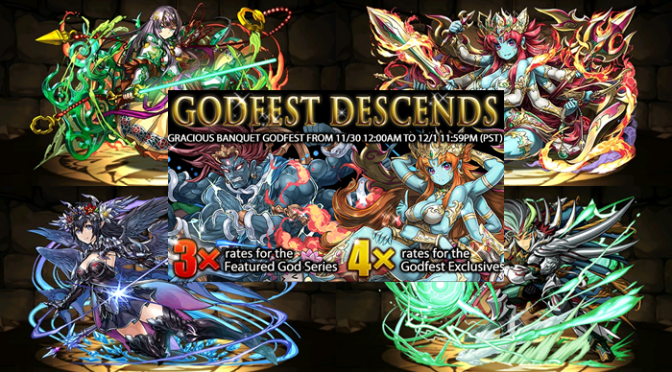 The Gracious Banquet Godfest comes as a bit of a surprise as we have been somewhat overwhelmed by Final Fantasy along with it falling on a Wednesday. However, to tempt players further, the new Wisdom Kings pantheon will be featured on both days alongside two powerful series. In addition, all monsters rolled during the Godfest will come out with +50 to a random stat.

If you are torn between rolling in Final Fantasy or this Godfest, you will have to determine what can benefit your box more? Furthermore, you have to take into consideration that the Final Fantasy Collab is a limited time event (may not return for 6+ months) whereas these featured pantheons will rotate back along with being available all the time.

The Greco Roman 2 pantheon is one of the oldest, but still possesses their powerful double orb changer. Granted they have diminished value in a heart cross meta, they are still capable of acting as powerful mono colour subs for their respective teams. In addition, they are capable forming reasonable tank teams that are reliant on matching two different colours. Overall, they are a powerful pantheon and are well positioned for when the meta shifts to powerful Krishna-style teams.

On the other hand, the Wisdom Kings pantheon is the newest one to be released in North America and features monsters who have unique actives and leader skills. All of them offer something new that will add dimension and diversity to your monster box. You may not need them in every situation, but it is worthwhile having them at your disposal. All of the Wisdom Kings have respectable leader skills and come ready to use (no ultimate evolution/awakening/reincarnating required). In addition, Acala

will become a formidable leader when her fire cross buff comes through.

The GFE featured on Day 1 is superior as you have both the Kalis and Kaede featured at increased rates.

Overall, Day 1 is a great way to acquire powerful cards and is worth rolling even if you already have some of the Greco Romans as they are powerful options as assistants through Skill Inheritance.

The Three Kingdoms pantheon  still remains as one of the strongest due to utility, leadership potential, and sub prowess. Many players have fully functional Awoken Liu Bei

teams and it has almost become the norm to button your way through content. However, the four other cards offered are still powerful with DQXQ

playing a vital role on Myr

teams while doubling as a formidable leader on her own.

The Wisdom Kings are featured once again on Day 2 and makes this day more appealing overall in today’s meta in terms of pantheons featured. It is also a fantastic day for players to roll who are missing top tier teams and/or lower rank players. Many of the pantheon cards in Day 2 are great leaders straight from the REM and can be used right away to begin clearing content.

Unfortuantely, the featured GFE are more lackluster as you are missing both the Kalis and Kaede from the increased rates so that does put an overall damper on what would normally have been a promising day.

The Gracious Banquet Godfest features the new Wisdom Kings paired alongside powerful pantheons. Whether or not you choose to roll will be based on how appealing you find the Final Fantasy Collab and whether or not the featured pantheons are appealing enough to outweigh the time sensitive Collab.

Let me know what you hope to roll this Godfest and how many stones you have saved up/budgeting.