After my dissapointing 5x GFE Godfest, I was left a little sad by my lack of REM luck. Thankfully, GungHo had introduced Myr

to North America and she has proven to be one of the strongest leaders in the game while being completely farmable. If you wish to read more about team building, please check out my article HERE. If you want some sample clears of how to farm her without MP Dragons, please click HERE. I had already cleared Arena 2 with DQXQ

When deciding which subs to bring for any challenging encounter, you want to maximize their value by striking a balance between active synergy, awakenings, and base stats. Through Skill Inheritance, you are able to further customize your team to your liking by bringing ideal bodies who can then inherit a stronger active. Of course, you have to use what you are given and it can make for some interesting team compositions.

For my latent choices, the Recovery

have 4x the value on Myr teams due to the 75% damage reduction shield.

Like in real life, I tend to not take many pictures and there are relatively few documenting my Arena 3 journey. I plan to stream runs in the future so be sure to check me out at https://www.twitch.tv/mantasticpad every Monday and Thursday at 6pm PST. However, for this Arena 3 clear, I encountered Sopdet, Ilsix, and DQ Hera prior to encountering Hera Dragon on floor 22.

The amazing thing about Myr teams is you have effectively 4x the listed HP (and RCV/auto healing) when you form a heart cross. I actually tank Ilsix’s enrage attack when under 30% HP to conserve actives as I effectively have 191k+ health. Hera Dragon is very scary as she absorbs over 2 million damage and has 39 million HP (The Radar Dragons are much scarier than the Kalis). Furthermore, she will alternate hitting you for 86k+ damage and restoring you to full health. You eventually die as the damage becomes too overwhelming so it essentially becomes a race against the clock. Due to the fact she is dark, I have to deal under 1 million damage to prevent her healing. This can be done via a heart cross and 2 light combos or a single TPA (on Fantastic, Mantastic’s Apollo will hit too hard). I had a surprise light TPA skyfall on turn 4 which gave me a major heart attack.

However, I continued to produce damage and she died just before her execution ability. I don’t think non-heart cross leaders can safely kill her. 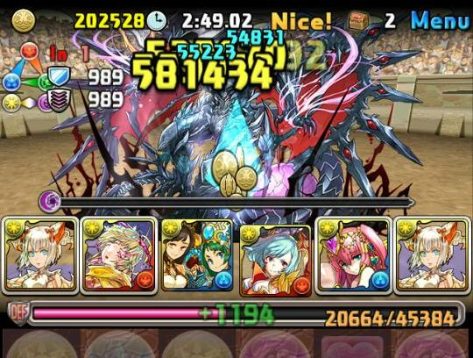 Moving onto Dark Kali, it was simply a matter of surviving her attacks and continously heart-crossing as I can survive any attack she produces if at full health.

PreDRAs were simply a matter of using Awoken Ra’s skill on my Pollux.

Arena 3 is a true test of skill and endurance with  a healthy smattering of luck. This was actually my first playthrough (as the spawns outside of the Radar Dragons on floor 22 are essentially the same) and maybe I got a bit lucky with Hera Dragon as I can heart-cross my way to victory. I will continue trying to farm at least one of each Radar Dragon and hopefully will have the skills and luck to bypass them as well.

What have you used to clear Arena 3?

14 thoughts on “A Puzzle and Dragons Myracle”