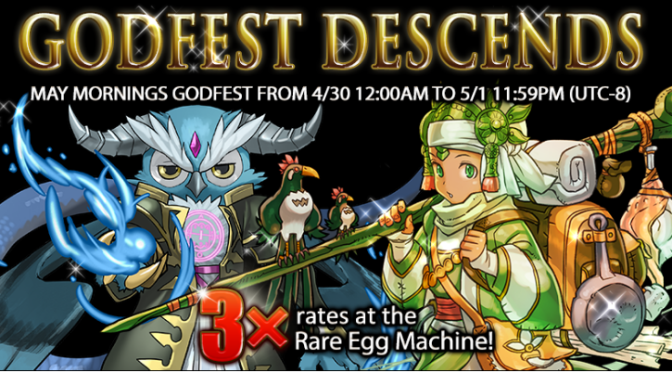 Unfortunately this Godfest was announced very late last night and caused my analysis to be delayed. When making the decision to roll or save your magic stones, you need to determine if the featured pantheons can benefit or compliment your teams. Chasing for one specific monster is unwise as you will most likely be disappointed and should ideally have Godfests that overlap with many target cards. Remember all monsters that come out of the REM will qualify for Skill Inheritance so do not be too hasty when selling dupes. Lastly, for a more detailed team building help, please refer to my full list HERE.

, is terribly weak and in need of a revamp or buff. Indian 1 has some strong leaders with Awoken Shiva

but all have nearly no sub potential. Indra

would be the most widely used sub from the pantheon, but is only situationally useful and should ideally have his awoken evolution made by now. Even if chasing a specific card, I would strongly advise you to not roll this day.

Day 2 is better than day 1 (almost any combination is), but is still lacking as powercreep has not been kind to the Japanese 2 pantheon. They were once heralded as one of the strongest pantheons, but with the introduction of MP Dragons and awoken evolutions, their reign was short lived. On the bright side, they are due for awoken evolutions and can still be powerful, but when paired alongside Archdemons, your chances of a useful roll are slim to nil. Archdemons only have two of their members receive an ultimate evolution (and they are immensely powerful), but the remaining 3 are still stuck with a horribly constructed active that requires immense investment to max skill and even then it is lackluster. Not as horrible as day 1, but may still be best to save your stones.