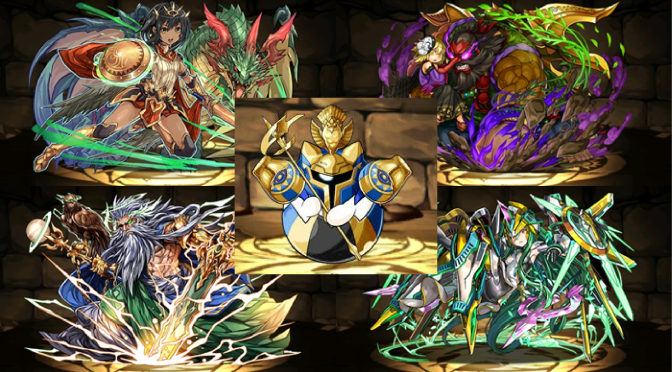 With 2017 in full swing, you should make it your New Years Resolution to acquire all the beneficial farmable monsters in Puzzle and Dragons. What will be most helpful will vary from box to box, but you should at least pursue most/all of the listed cards because they are always available and have varying degrees of value.If you feel I have missed anything out, please let me know in the comments below.

These are who I consider to be the most vital farmable monsters moving forward into 2017 for Puzzle and Dragons in no particular order:

Rogue Descends are the purple/pink dungeons that have a leveling up mechanic. This means your monsters start at level 1 and gain experience as you progress through the dungeon based on their team cost. These tend to be challenging dungeons with the bosses having difficult evolution paths and a lengthy skill up process; however, they have varying degrees of usage and have become easier to acquire due to stronger teams/leaders.

Button teams are used to quickly and efficiently clear easy content when playing in coop. Their main goal is to save you time to better take advantage the hourly time limit imposed by Guerrilla dungeons. They can largely be broken down into three broad categories: true damage, poison, and non-true damage. Each has their own merits and what you choose to use will be based on what dungeon you are playing.

These are by no means mandatory, but having these components ready to go will greatly increase your chances of finding coop partners.

True damage is damage that is dealt which is not resisted by defense or attribute. It will always deal the same amount of damage and is best used to bypass high defense monsters as the damage dealt is relatively low. These types of cards are helpful as they will not induce a pass turn animation and the same player can continuously button through the entire dungeon.

The following list showcases the more common true damage monsters that hit all enemies. Also be on the lookout for the skill up material rotation as some GFE have a true damage component.

is a unique card as he reduces all enemy’s defence to 0 and then deals a small amount of damage. This allows you to kill a high defense encounter and the defense void carries onto the next floor and is only lost due to a preemptive or status void shield. Not as reliable as true damage, but worth mentioning.

Poison is similar to true damage as it deals a set amount of damage to an enemy that does not have a status void buff. This damage takes place after you match orbs and can actually kill resolve bosses. However, poison is slower than true damage for a button team as it will switch to the other player after killing the floor.

These types of cards are able to deal large amounts of damage, but is affected by enemy’s defense and attribute. As such, you will be unable to kill high defense monsters, but will be able to kill encounters with a couple hundred-thousand health and is mostly used for farming Star Den.

who are able to deal 70,000 damage to wood enemies. This can allow a full team of Ogres and Goemon to push button the wood difficulty as shown in the following video:
—

This mostly applies to scenarios where you need to deal modestly large amounts of damage to a final floor (Star Den) as you require an easy to use leader skill. Otherwise, feel free to use any card that has the most skill boosts possible or a damage nuke.

This section will cover commonly used subs on a variety of teams. They can act as REM alternatives or provide specific actives required for success. These are in no particular order as value varies from person-to person.

The three Machine bosses are all immensely powerful; however, they are challenging to acquire, skill up, and evolve and may prove challenging for the average player. All of the following cards lack a sub element and have around 1,000 weighted stats. In order to unlock their full leader skill, you must be playing in coop.

There are many powerful farmable monsters to be acquired in Puzzle and Dragons. They may not always have the same flair as various REM cards, but help provide diversity to your monster box along with helping fulfill niche roles.

What farmable cards have you found to be the most helpful?