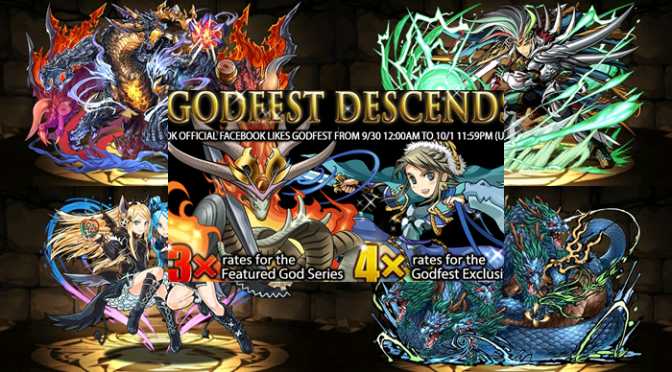 220k Facebook Likes may be a strange milestone to be celebrating, but at least it is a round number and is most likely to coincide with the 3-year anniversary for EU. Regardless, GungHo is featuring four different Pantheons along with certain GFE at a 4x rate. Unfortunately, neither day is truly outstanding as many of the cards are starting to fall behind due to Powercreep.

The Indian 1 Pantheon finally has all their Awoken evolutions; however, many of them are starting to fall out of the meta due to the speed of powercreep. Furthermore, Shiva

only come into their full power with their awoken forms and will be quite weak beforehand. However, Japan has just announced new Reincarnated evolutions for those three and it may help give them an extra boost in power to help make them relevant again. The main drawback of the Indian 1 is the delay between their uses on pull and acquiring their awoken evolution.

The Three Kingdoms have become one of the most desirable pantheons to own as each card brings a phenomenal amount of power and utility to their respective teams. Whether as leaders or superstar subs, you will want to own at least a few of these mighty warriors and are even respectable before their awoken evolutions so you will have value early on. The current prize to be had is Awoken Liu Bei

as he trivializes countless content in Coop and many players will be tempted to roll just for him.

Overall, Day 1 is the stronger of the two line ups in terms of pantheons featured.

Day 2 features the aging Japanese 1 and Norse God Pantheons. Japanese 1 is one of the oldest series to date and as such, have begun to fall behind in terms of Powercreep. They make niche subs or inherits in end game content and have relatively low value prior to their awoken forms.

By comparison, the Norse Gods are still a powerful option for damage enhance as subs, leaders, or inherits; however, their main strength of two turns of enhanced will be lost when the Armour Knights and Gemstone Princesses all receive their future buff in JP. This does not make the Norse Gods weaker, but simply means you may have better options for enhancement.

Day 1 features the stronger line up mostly due to the power of the Three Kingdom Gods and Awoken Liu Bei. However, neither day is exceptionally noteworthy  as too many aging pantheons are featured along with lower value until many of those cards are evolved into their awoken form.

Let me know what you hope to roll this Godfest and how many stones you have saved up/budgeting.