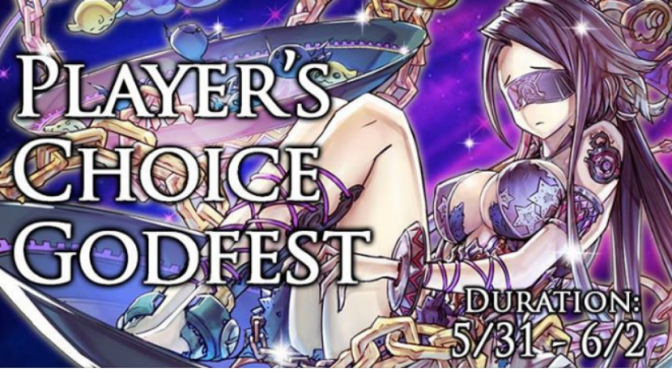 Player’s Choice Godfest is one of the most anticipated times of the year for all Puzzle and Dragoners. It is a time where the community collectively votes for the most popular gods and is a great way to help populate your monster box with numerous strong cards. In my previous post, I compared PCGF and 4x Godfest Exclusive (GFE) events and came to the conclusion that it is better to roll PCGF for newer accounts/players missing numerous key cards.

However, with the promise of 4x rates for all the featured monsters, my approach needs some tweaking. Due to not knowing the true rates of any godfest, we cannot do any mathematical comparisons; however, the 4x rates should imply the featured GFE (and most importantly 6* GFE) are at a similar hit rate. You may still get less MP per stone spent as numerous non-GFE are also featured, but if you are chasing the featured 6-stars AND the other featured gods, this may be the best time to roll. Furthermore, each monster comes out with a +50 to a random stat and this will help you achieve +297 faster. However, take these predictions with a grain of salt as I do not know the rates and can only guess.

In addition, all of these monsters qualify for Skill Inheritance so please do not hastily sell or feed them off without taking a moment to think if they can benefit your various teams. I also strongly encourage you to read my Advanced Strategies post on Skill Inheritance to gain a better understanding on how to make the most of your active skills.

Lastly, if you wish to read about virtually any other REM monster not listed below, please refer to my Master List which will direct you to the appropriate page.

The voting for North America was done rather well as we managed to include nearly all the top tier cards while having some forethought into voting in cards that will become relevant with the release of the 4 Gentlemen 300k MP cards and new Awoken evolutions.

Some things that jump out:

I will sort all the featured monsters into 6* GFE, 5* GFE, and the five colours to help with finding your desired monster.

Despite having eight 6-star GFE populating this PCGF, they will still remain the most elusive and rare to obtain. However, if you are fortunate enough to roll one (or more), you will probably be overjoyed and excited to wield some of the strongest monsters in Puzzle and Dragons

Despite the fact that only two 5-star GFE were voted in this time, the two chosen are incredibly powerful. They both fulfil their respective team roles as one of the best options and are somewhat irreplaceable when challenging high level content.

as he is primarily for push-button teams). This is perhaps testament to the low variety of leads fire has its disposal with many cards going to waste due to no strong row leader (outside of the super rare Collab Raoh

). However, all of the voted cards do have a purpose in the current meta and are a great addition to any box. To read more about the very soon to be released Xiang Mei

Water monsters were a splashing success this time around with an incredible 7 monsters being voted in. Not to dampen your spirits, but four of them are the rare 6-star GFE and your box may not be awash with water cards this PCGF.

Got wood? Apparently the answer is we don’t really care as only a single wood monster was voted in this PCGF. And Susano is not really viewed as a wood sub, but more so as a Fantastic shielding option. He would probably be even more popular if he was a different colour and had wood as a subtype.

Light monsters still shine bright with the introduction of row based teams who capitalize on flooding the board with numerous light orbs to unleash explosive damage. Furthermore, with the anticipated release of Awoken DQXQ

, we get the best of both rainbow and row teams combined into two pretty girls.

Yomi was surprisingly the most voted dark non-GFE monster and is mostly used as an incredibly powerful and hard hitting leader. However, the remaining dark cards can all be used with each other to form powerful tank teams or find themselves as subs on other popular teams. Overall, very solid rolls and each will help your develop your dark box immensely.

This Player’s Choice Godfest features a wide array of monsters who can help populate your favourite teams with their unique utility and formidable power. For most players, this will be the most exciting Godfest for a long time and the prospect of 4x rates along with a +50 to a random stat only sweeten the deal. Just remember that the 6-star Godfest Exclusives may have low rates and your main focus should be in pursuit of the regular pantheon gods.

Who are you hoping to roll?

Side note: If you read this article in its entirety, congratulations on reading what is essentially a 7,000 word essay!