One of the best aspects of PAD is having older cards receive new evolutions or meaningful buffs to help them stay abreast with newer options.

While it is impossible to have everything be truly viable along with the innate power disparity compared to Pantheons versus top rarity Collab cards, many of the cards featured in this latest update can bring additional depth and options to a given Monster Box.

This article will high light the strengths and weaknesses for the new Evolutions found within this update.

END_OF_DOCUMENT_TOKEN_TO_BE_REPLACED

To mark the 11 million downloads in North America, GungHo is throwing a modestly more special Godfest to mark this occasion. We have been experiencing 4x GFE for quite some time now and with only a smattering of 5x to try and entice us. However, these increased rates do not appear to be any more special than Godfests of old due to the significantly larger REM pool. It is my understanding (I could be wrong) that with each new pantheon (or GFE) added, the rates to roll a particular card go down. Thus, the increased rates are merely there to keep abreast with this “inflation.”

Regardless, this Godfest features a reasonable line up along with +33 to each roll (+11 to each stat).

Player’s Choice Godfest results have been officially announced and will take place this Friday starting at 12am PST. All rolls will feature +44 to a random stat and only the voted GFE will be featured (which means no Sonias/Metatrons etc.). This post will cover my thoughts and opinions of the voted cards along with who I felt should have made it in, but failed to make an appearance.

Unlike previous Player’s Choice Godfests, GungHo did not have a running tally of the leader board and many votes probably went to waste on the top winners.

For the most part, the voting makes sense with the featured cards as the majority of them have a place in the current (or near future) meta. However, what is most shocking is the fact that 11 six-star Godfest Exclusives were voted in.

From the data collected by me in the previous December PCGF, you have a disparagingly low chance to roll a six-star GFE.

Player’s Choice Godfests should be used to acquire the best pantheon cards available and by having 44% of the featured monsters being nearly unobtainable, we have essentially defeated the purpose of a PCGF. Six-star GFE are best acquired during a 5x GFE event or the special 10-stone REM (if it returns). I understand that those events do run the risk of other GFE appearing, but if we want 11 six stars, you are quite likely to roll them anyway. Six-star GFE will greatly lower the chances of rolling a featured monster and will most certainly add to the disappointment of higher silver egg rolls.

Voting in 11 six-stars is an unhealthy indication for the state of Puzzle and Dragons. Too many teams desperately require these elusive cards to function and without duplicates of the same six-star, their team is significantly weaker. It is not a bad thing to have six-star GFE as a top tier leader, but when you require nearly a full team to be optimal, then we have a problem. However, GungHo appears to be continuing down the path of six-star supremacy as the new evolutions for the 5 MP Dragons does not advance the current rate of Powercreep for leaders, only brings Ra Dragon

on-par or marginally better than the best heart-cross leaders. In addition, the best Ra Dragon team consists of 3/4 six-stars. END_OF_DOCUMENT_TOKEN_TO_BE_REPLACED

When making the decision to roll or save your magic stones, you need to determine if the featured pantheons can benefit or compliment your teams. Chasing for one specific monster is unwise as you will most likely be disappointed and should ideally have Godfests that overlap with many target cards. Remember all monsters that come out of the REM will qualify for Skill Inheritance so do not be too hasty when selling dupes. For a more detailed team building help, please refer to my full list Popular Leader’s and their Full Sub List Post. Lastly, to find more information about a specific pantheon or monster, refer to my Master List to better refine your search.

. These two formidable dragons bring both stunning art and new utility for a variety of teams. I will be creating a separate posting detailing their uses so stay tuned/check back over the weekend. Outside of the two new cards, the featured gods and select GFE will appear at a 3x rate. It is a shame GungHo is featuring the newly Awoken Greco-Roman 2 gods with the lacklustre Mechanical 2 series. However, day 2 is more promising as the Mechanical 1 is gaining more viability on mono colour teams and the Hero pantheon are still the heros that their name implies.

The Greco-Roman 2 are renown for their double orb changer active that converts two different elements into their primary colour. This is fantastic for teams who wish to flood the board with their desired colour and generally is best on row based teams. With the introduction of their awoken evolutions, players now have a tough decision to make as each evolution offers different benefits.

On the other hand, the Mechanical 2 series are one of the newer pantheons and feature monsters who have a hard time fitting in due to a lack of synergy. Only Hamal

can be effectively used at the moment and it would be best to avoid rolling for this pantheon until more cards are released or the jammer meta is more solidified. Lastly, none of the Mechanical 2 Gods have an ultimate evolution and may not for some time.
END_OF_DOCUMENT_TOKEN_TO_BE_REPLACED

Player’s Choice Godfest is one of the most anticipated times of the year for all Puzzle and Dragoners. It is a time where the community collectively votes for the most popular gods and is a great way to help populate your monster box with numerous strong cards. In my previous post, I compared PCGF and 4x Godfest Exclusive (GFE) events and came to the conclusion that it is better to roll PCGF for newer accounts/players missing numerous key cards.

However, with the promise of 4x rates for all the featured monsters, my approach needs some tweaking. Due to not knowing the true rates of any godfest, we cannot do any mathematical comparisons; however, the 4x rates should imply the featured GFE (and most importantly 6* GFE) are at a similar hit rate. You may still get less MP per stone spent as numerous non-GFE are also featured, but if you are chasing the featured 6-stars AND the other featured gods, this may be the best time to roll. Furthermore, each monster comes out with a +50 to a random stat and this will help you achieve +297 faster. However, take these predictions with a grain of salt as I do not know the rates and can only guess.

In addition, all of these monsters qualify for Skill Inheritance so please do not hastily sell or feed them off without taking a moment to think if they can benefit your various teams. I also strongly encourage you to read my Advanced Strategies post on Skill Inheritance to gain a better understanding on how to make the most of your active skills.

Lastly, if you wish to read about virtually any other REM monster not listed below, please refer to my Master List which will direct you to the appropriate page.

The voting for North America was done rather well as we managed to include nearly all the top tier cards while having some forethought into voting in cards that will become relevant with the release of the 4 Gentlemen 300k MP cards and new Awoken evolutions.

Some things that jump out: END_OF_DOCUMENT_TOKEN_TO_BE_REPLACED

Refer to the Master List for directory to the other pantheons and their analysis.

Take a look at my Popular Leaders and their Full Sub List post for inspiration on team building ideas. If contemplating on purchasing a MP Dragon, please check out my Monster Point Dragon Purchasing Check-list Guide.

Keep in mind all of the following monsters qualify for Skill Inheritance so do not be too hasty in selling dupes.

END_OF_DOCUMENT_TOKEN_TO_BE_REPLACED 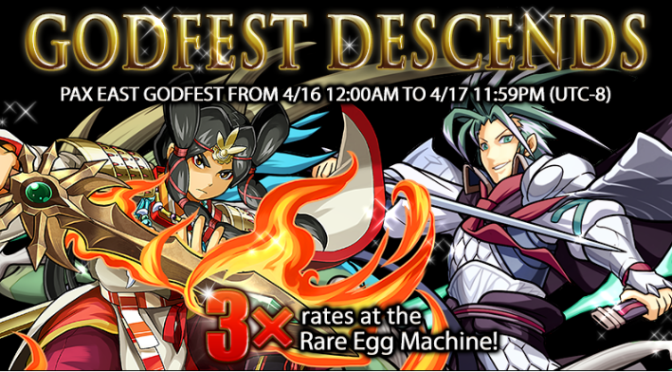 My breakdown and analysis of all the featured pantheons for the PAX East godfest. For a more detailed team building help, please refer to my full list HERE.

Day 1 features some of the most powerful subs in Puzzle and Dragons who bring a mixture of utility and sheer power in their actives and awakenings. The Greco-Roman 2 all have amazing double orb changer that convert 2 other orbs into their primary colour. Furthermore, their entire pantheon is in the process of receiving Awoken Evolutions which push their base stats and actives into new territory by granting them an enhanced skyfall mechanic for 2 turns. Furthermore, all of the Greco-Roman 2 monsters have 2+ viable evolution paths so their flexibility is unsurpassed. The Three Kingdoms have more diversified actives that fulfil many roles and with the new awakenings buff, some have 2 viable evolutions. In addition, DQ

will be reunited with her sister to form a newly announced Awoken evolution that caps at 100x damage. Overall a great day to roll if you are looking to bolster your mono colour teams.